His Name Is Rocky!

Today has been great and the past few days have been busy, scary, exciting and great. This past Thursday, I wrote about sweet Marguerite taking little Sara Lee aka Scout home and possibly going to adopt that little, cutie-pie pup.

Kinky, Tony and I were on Cloud 9 about Marguerite taking sweet Sara Lee home and trying her out, until Friday afternoon, at 2:05, when Marguerite sent me this e-mail:

"Little Scout didn't have much of an appetite last night or this morning, so I took her in to Dr. Rydberg to check out. She started having bloody diarrhea while she was there, so they have her on fluids and a couple of drugs. He wanted to keep her overnight to see how she does. I'm worried because she has such a precious personality, and I've already become very attached. I'll let you know tomorrow how things are progressing."

My heart sank with the scary news and I was anxious for the rest of the day and night, worried sick that this adorable, 9-week-old pup might have parvo or distemper, etc.

Saturday morning, still worried about Scout, I called the clinic to check on Scout and I was totally thrilled to find out that she was fine and it all had been caused by a severe case of hook or whip worms. Then a few hours later I received this e-mail and photo from Marguerite:

"She's Home! She tested negative for Parvo, and bounced back over night on the fluids and drugs. She is sooo precious." 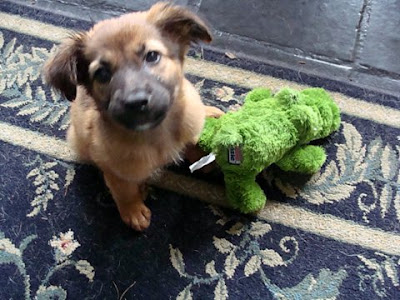 All of this good news about Scout being healthy made my day great.

Late Sunday afternoon was exciting. Around 4:00, right after Tony and I had returned home, after running several errands in Kerrville, we were unloading our groceries, from Trigger, when we heard and then saw a huge, black pickup driving into the rescue ranch. It startled us, because we are closed on Sundays and we didn't recognize the truck.

When the pickup pulled up to our trailer and had stopped, Tony and I waved and then started walking towards the truck, to greet whoever it was. Then the mystery was instantly solved when we saw sweet Ellie, one of our favorite, Medina Children's Home, former dog-walking volunteers, jumped out of the truck. "I'm with my family and we're here to adopt Tuesday Weld and take her back home with us!"

While Ellie was busy hugging Tony and me, her nice parents and brother climbed out of the truck and walked up to introduce themselves to us. And twenty minutes later, Ellie and her family had officially adopted Tuesday Weld. I took this picture of Ellie and Tuesday, before they adios-ed us and drove away with precious cargo. 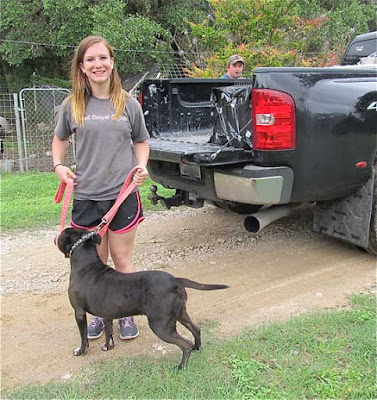 After they left, Tony and I finished unloading our groceries and took them up to The Cabin. And while we put away our groceries we listened to three urgent phone calls, from Karon, from the Arms of Hope Medina Children's Home.

Basically, Karon wanted us to call her, as soon as possible, because someone, on campus, had found a Great Dane and a Lab roaming around. "I bet it is that Great Dane that we rescued, years ago, that lives nearby. You know that black one that is famous for getting lost and wound up spending the night with that famous astronaut, whom I can't remember and then with Kinky." I said. Then I picked up the phone and told Kinky about the two lost dogs and asked him if he could remember that astronaut's name, so I could back track through my blog and log books to find the owner's name and phone number.

"Nance, that Great Dane was a really great dog, but I can't remember the dog's name. But I do remember that the dog had spent the night with the astronaut Gene Cernan.....Keep me posted. Bye."

A few minutes later, after searching my blog for Gene Cernan's name, I found the Great Dane's story that I had posted on Monday, October 8, 2012. "Tony, the dog's name is Rocky and the owner is that nice woman named Kathy. I know I wrote Rocky's contact info down and it will take me just a few more minutes to locate it.

Three minutes later, I said, "Tony here is Kathy's phone number! Please call her to let her know where her dogs are." Tony immediately called Kathy to find out that her dogs were not lost. In fact, she told Tony that she was out on the porch, sitting with them and she thanked him for trying to help the lost dogs.

Now Tony and I are confused, so he grabs his camera and says, "Nance, I'm going over to the children's home to get a picture of these dogs." Then he took off.

Twenty minutes later, Tony returns and tells me that the person who found the dogs, on campus, was wrong about the dog breeds. "Look Nance. One's a beautiful, full-blooded German Shepherd and the other is a Catahoula." Then he calls Karon back to tell her what breed the dogs actually are and that he was going to post the lost dog's pictures, this morning, at The Old Timer.

Early this afternoon, we saw Karon and she told us that those two lost dogs were finally back, at their owner's home, thanks to the many pictures that she and Tony had posted, because Ginger, who works for our Medina veterinarian, Dr. James Lindstrom, had recognized the dogs and called the family.

Today has been great. This afternoon, we went to Hoegemeyers to pick up a refill prescription for my Roy Rogers and while we were there, I told Susan about a woman calling me this morning about a 6 year, male Maltese that needed a home, because his owner had died. And after she told me that she would help me get the word out, she joked, "I know. Just call Marguerite. She'll take him." We were still laughing when I left the clinic.

Then we ran a few more errands and our last stop was at, Wild Birds Unlimited, because on our way to the Post Office sub-station, we saw Marguerite's car parked outside.

As soon as we walked inside, Marguerite ducked behind the counter and said, "Marguerite's not here." And then she, another friendly employee and the owners, Linda and Kevin Pillow, burst out laughing. Tony and I had a really fun visit with them and before we left one of our favorite stores I purchased a solar-powered drop, which is now hanging outside.

So, today has been a lot of fun. I'm thrilled with my Area 51 license plate that arrived in the mail today and I love the pretty, solar-powered drop, that will soon be shining brightly. Y'all have a great evening!
Posted by cousin nancy at 7:04 PM