The last few days and today have been great. This morning, when Tony came home, after drinking coffee, at The Old Timer, he had a big grin on his face as he handed me today's copy of The Kerrville Daily Times. "Nance, Donna Hatch has written another great story about another one of our good friends, Mike Scovel. Her article about Mike is so great. It's on the front page of the Living section." 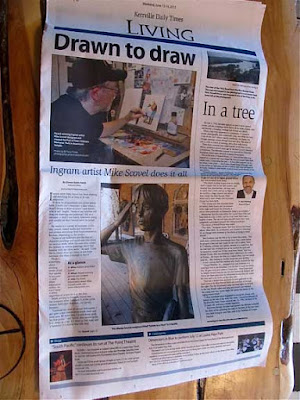 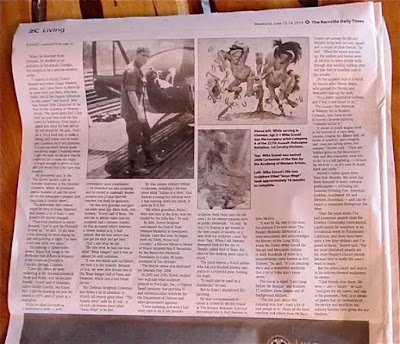 After I had finished reading the super great article about Mike again, because last night sweet Donna Gable Hatch had sent me her awesome story about Mike, so I could blog about it tonight. Unfortunately she and I use different software and my blog doesn't allow certain files, so I am going to try to recreate this great story and that's why I posted pictures of The Kerrville Daily Times newspaper version up above, so you can see how nicely Donna put it together. 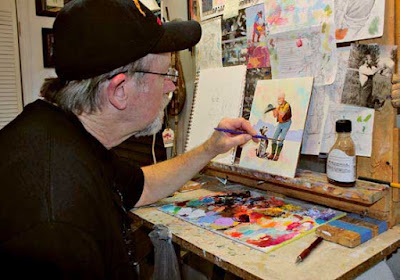 Ingram artist Mike Scovel has been drawing and sketching for as long as he can remember.

“It must be programmed into artists before birth. I really can’t remember a time when I wasn’t trying to draw or paint,” said Scovel, who is self- taught. “Some of my relatives still drag out drawings and paintings I did as a teenager — stuff I can barely remember doing, and usually art that I would never be proud of.”

He works in a variety of mediums — oils, clay, pencil, mixed media and watercolor —and creates everything from Impressionism to Realism, depending on the project.

“Some of my collectors love the fine art character paintings and could care less about the serious work, while the ones who collect the military or serious paintings aren’t that familiar with the other work,” he said. “I just like to create what my vision is and hope someone else likes it enough to buy it.”

There’s something about creating works of art that speaks to his core — and when inspiration strikes, he can’t tamp it down, regardless of where he is at the time.

While serving in Vietnam, Scovel was the company artist Company A of the 227th Assault Helicopter Battalion, 1st Cavalry Division. 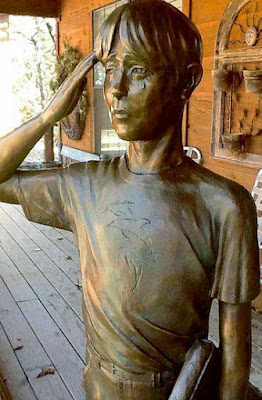 When he returned from Vietnam, he worked as an animator in Savannah, Georgia, but longed to be a serious western artist.

“I started studying Charlie Russell and other classic Western artists, and I also drove to Kerrville to meet with Ace Reid, who was really one of the biggest influences on my career,” said Scovel, who was named 2008 Cartoonist of the Year by the Academy of Western Artists. “He spent about half a day with me and then took me into town for barbecue. Over lunch, I asked him what his best advice for me would be. He said, ‘Don’t do it. It’s a hard way to make a living, and unless you’ve really got a passion for it and patience, it’s just too hard,’ which made me plenty angry. I realized when I saw the look on his face that he intended for it make me angry — angry enough to prove to him and the world that I did have that passion.”
He persevered and, in the ’70s, Scovel landed a job as features illustrator at the Houston Chronicle, where he produced special features art and the cover art for the newspaper’s popular Zest magazine, a Sunday insert.

The newspaper did a feature article on their in-house illustrator that created a lot of buzz — and Scovel’s life forever changed.

“That story produced so much demand, I had to quit the Chronicle to keep up,” he said. “At the time, I was drawing for them during the day and painting at night. I’ve been a full-time artist ever since.”

His painting of famed rodeo clown, Kajun Kid, hangs in the ProRodeo Hall of Fame & Museum of the American Cowboy in Colorado Springs, Colorado.

“I met him when we were exhibiting at the Houston Livestock Show and Rodeo, and we became friends,” Scovel said of Louisiana native Dudley Gaudin, aka Kajun Kid. “I did the painting the year he retired in 1979, after 27 years as a bullfighter.

While he plied his trade as a professional artist — with commission upon commission — he branched out into sculpting, and he turned to nationally known sculptor and 27-year Kerrville resident Jim Reno for guidance.

“He was very gracious and gave me some great tips about tools, clay, etcetera,” Scovel said of Reno. “He told me to always make sure my sculpture had a tornadic motion, so that no matter which direction a viewer looked at it, it had interest. But his best advice was ‘just get the stuff and get busy.’”

That’s just what he did.

The first work he had cast was titled “Texas Ranger,” and it was an instant hit with collectors.
“It was two-thirds sold out before we took it to the foundry. Because of that, we were able donate one to the Texas Ranger Hall of Fame and Museum, which was a real honor for me.” His Christian Sculpture Collection also draws a lot of attention: A 10-inch tall bronze piece titled “The Apostle John” sells for $1,450. A 24-inch tall bronze piece titled “Jesus Wept” is $4,800.

He also creates military tribute sculptures, including a life-size piece titled “Salute to a Hero” that depicts a young boy saluting with a tear running down his cheek. It sells for $18,500.

“My eldest grandson, Kolter,who was nine at the time, was my model for the little boy,” he said.

In 2003, Scovel designed and created the Pool of Tears Veterans Memorial in downtown Temple. Later that year, he beganwork on “Duty, Honor and Country,” a life-size tribute to Medal of Honor recipient Roy P. Benavidez for the Benavidez Memorial Foundation in Cuero, 90 miles southeast of San Antonio.

The bronze statue was dedicated on Veterans Day, 2004.

In 2005 and 2006, Scovel created two wall-size relief sculpture projects to Pro-Logic, Inc., a Virginia based company that provides IT and communication solutions for the Department of Defense and other government agencies.

“I love sculpting and wish I had more time to do it. My favorite sculpture work these days are the ones I do for veteran projects such as public memorials,” he said. “In fact, I’m hoping to get started in the next couple of months on a new desk top sculpture called ‘No More Taps.’ When I did Veterans Memorial Park for the city of Temple, called Pool of Tears, the idea for this desktop piece came to mind.”

The piece depicts a 9-inch soldier who has just finished playing taps and is in a prayerful pose, holding his bugle.

“It could also be used on a headstone,” he said.

But he hasn’t abandoned his painting.

He was commissioned to create a 10-feet by 40-feet mural at The Bosque Redondo National Monument site in Fort Sumner in New Mexico.

“It was by far, one of the most fun projects I’ve ever done. The Bosque Redondo Memorial is a state monument and acknowledges the history of the Long Walk, when the Union Army forced the Navajo and Mescalero Indians to walk hundreds of miles to a concentration camp known as Fort Sumner,” he said. “It’s an amazing story and a wonderful memorial that a lot of folks don’t know about.”

The mural is titled “Last Camp before the Bosque” and features 17 soldiers, three horses and 30 background soldiers.

“The fun part about this painting was that I used a lot of real people in it. Many of the local ranchers and others from De Baca County are among the life-size soldiers along with our son, myself and a couple of close friends,” he said. “When the mural was put up, the soldiers and horses were all life-size so when people walk through that winding hallway, they feel like they’re standing next to the soldiers.”

On the opposite wall is a mural by Navajo artist Shonto Begay, who painted the Navajo and Mescalero making the walk.

“It’s a pretty impressive hallway, and it was a real honor to do.”

The Leanin’ Tree Museum of Western Art in Boulder, Colorado, lays claim to one of Scovel’s favorite painting: “Commm’nn’Git’It.”

“It shows a chuck wagon cook at the bottom of a very deep canyon, ringing the dinner bell. All kinds of cowboys and cowgirls and cows are falling down the canyon,” Scovel said. “There are hidden gems in the mountain’s side and the characters were fun to do. It’s a tall painting — 24-inch by 48-inch — so it’s easy to stand back and study.”

Scovel’s career spans more than four decades. His work has been featured in many national publications — including the Saturday Evening Post, American Cowboy, Southwest Art and Western Horseman — and can befound in museums throughout the West.

“Over the years since, I’ve had numerous awards from the Cowboy Cartoonists International, a gold medal for sculpture at an invitational event in Paramount, California, and there have been
quite a few blue ribbons and I’m proud of those,” Scovel said. “But my most cherished awards are the three People’s Choice awards because they’re really the ones I want to reach.”

But his artist’s heart and soul is in the military-themed sculptures he creates. “I lost friends over there. We were — are — family,” he said.

“God gave me my talent, and one of the purposes, I feel, is to create art pieces that are reminders of the service and sacrifices our military families have given for our freedom.” 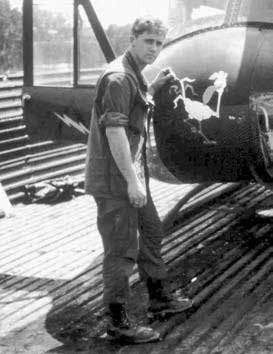 While serving in Vietnam, Sgt. E-5 Mike Scovel was the company artist Company A of the 227th Assault Helicopter Battalion, 1st Cavalry Division. 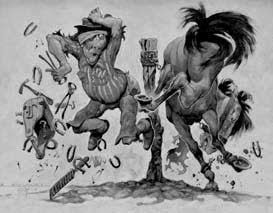 Mike Scovel was named 2008 Cartoonist of the Year by the Academy of Western Artists. 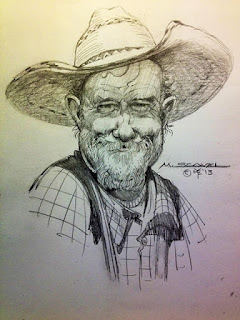 P.S. Hey Mineral Man! I want you to know that Kinky came over today and he ate lunch with us. Just like Tony, Kinky LOVED eating your "The Mineral Man's Pickled Peppers" that you made and gave to us yesterday morning. And Kinky also took several more of them with him, when he left, so he could enjoy them later!

Y'all have a great night!