Today has been great even though it is mighty hot outside and Mercury is retrograde. A few days ago, I was over at the Lodge talking to Kinky about my second novella. I asked him if he would consider writing a blurb, for the back of my book. He told me that he would love to do it.

Late this afternoon Kinky called to tell me that he had written the blurb and then he told me that he needed to borrow a small crate, because Brian Kanof was coming in late tonight and Brian was going to give a home to the young, female cat, that Kinky has befriended and been feeding. "I'll come over now to pick up the blurb and to drop off a crate." Then I walked out of The Cabin, jumped into Buttermilk and went over to the Lodge.

When I walked inside Kinky's kitchen, the first thing he said, "Hi, Nance. Did you bring the crate?"

I laughed and then said, "Nope. I totally forgot." That made Kinky laugh. "I guess I was so excited about you writing a blurb, I simply forgot."Then we went into his office so he could give me his blurb. 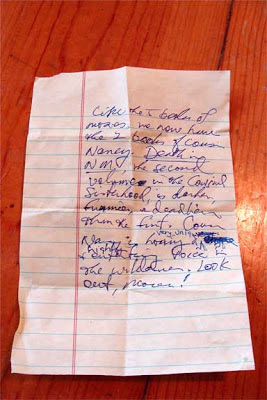 "Kinky, would you mind reading this to me, so I will know what it says?" Then I handed his blurb back to him.

"Like the 5 books of Moses, we now have the 2 books of Cousin Nancy. Death In New Mexico, the second volume in the Cowgirl Sisterhood, is darker, funnier and deadlier than the first. Cousin Nancy is honing a very unique and highly entertaining voice in the wilderness. Look out, Moses!" Kinky said.

"I love it, Kinky! Thank you so much." Then he and I went outside to visit, on his front porch. After a fun visit with Kinky, I told him, "I'm going to go home and bring you back the crate, before I forget all about it."

When I got home, I quickly typed out Kinky's blurb and then printed it, so I could get Kinky to double check it, to make sure that I got his words right. Then I showed Kinky's blurb to Tony and Tony loved it, too. Then I asked Tony to go with me to Kinky's, to drop off a crate and get his okay on his blurb he had written.

Tony and I were halfway to Kinky's when I said, "Tony, we forgot the crate." So, Tony backed Trigger up and went back to the rescue ranch to get a crate.

When we walked inside the Lodge, Kinky's first words were, "Hi, Tony and Nancy. Did you bring the crate?"

"Yes, but we forgot to bring it and had to go back to get it..." After Kinky had read his typed out blurb and okayed it, we adios-ed each other and came back home. And that is about it for tonight.

Y'all have a great evening!
Posted by cousin nancy at 7:05 PM

Nancy, I can´t wait for your second novel! Please send me a signed exemplar! Of course, I will pay for it! Your "native" friend: Turned apple! Love y´all!

Hi Karin and Air Gun. I will send y'all, my German friends, a free copy as soon as the books arrive.