On The Cover Of Texas Animal Imprints!

Today has been great. This afternoon while we were in Kerrville, we stopped by Wolfmueller's Books to say hi to Sandy and Jon and to get them to sign Lynda's soup cookbook that she won in my contest, and to show off Tony's pictures on the cover and his beautiful pictures inside the Texas Animal Imprints January / February magazine!

When we arrived at the bookstore Jon greeted us from behind the checkout counter. "Where's Sandy?" Tony asked. "I bet she's out buying more books."

No, she's not out buying books today," Jon said. "She had to go home to pick up a book." Then we started laughing. "She should be here any minute..."

"Jon, I brought Lynda's cookbook to get y'all to sign it. And if you don't mind, keeping it here until Mari can swing by and sign it, before I mail it to Lynda."

"Well, Tony is becoming a famous photographer, Jon. Take a look at his beautiful picture on the cover of  Texas Animal Imprints January / February magazine!" I said, as I handed the magazine to Jon, so he could look at it. 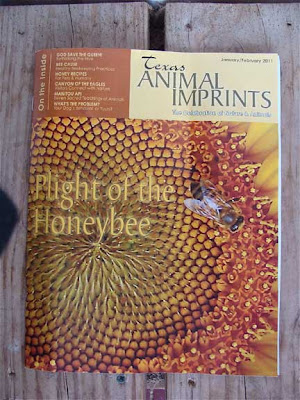 "And Joni, the publisher, also used one of Tone's pictures for Connie Strong's great story about my friend Cindy, when she interviewed her about her documentary "MANITOU-API: WHERE THE SUN RISES" and Tony also took these pictures of Pilgrim and Pumpkin for my column that I wrote! Isn't this great!" I bragged, as Jon quickly thumbed through the magazine to look at all of T.'s pictures.

"You're good, Tony. These are beautiful photos," Jon said, as Sandy walked in the back door and waved to us, before coming up to join us. "Sandy look at Tony's pictures..."

"I love these, Tony!" Sandy said. "Congratulations." Then Kathleen Keen walked in the front door. After greetings, Sandy handed the Texas Animal Imprints magazine to Kathleen and said, "Tony took these pictures..."

"Tony! I love your pictures, especially the one of the sunset."

"He took that one from our front porch," I said. "I love all of his pictures! And you can go online to read Texas Animal Imprints January / February magazine right now. Y'all will love Connie Strong's article about Cindy, too. And Kinky's column."

A few minutes later Kathleen had to take off and then some customers walked into the bookstore, so I looked at books while Sandy and Jon helped their customers. Before leaving their bookstore, I bought these two books about my hero, Mark Twain! And, I a can't wait to start reading them. 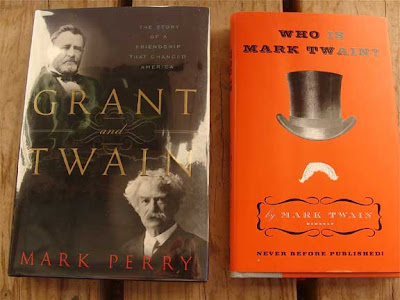 Around four o'clock today, I went over to the Lodge to show Kinky my new books, Grant and Twain: The Story Of A Friendship That Changed America by Mark Perry and Who Is Mark Twain by Mark Twain himself, that have never been published before! "I've got and already read Who Is Mark Twain, and it was good, but I would like to read this one."

"I'll loan it to you as soon as I finish reading it," I said, before we went to visit with The Friedmans in the big room.

Tonight, as soon as I finish writing this blog, I plan to start reading the Grant and Twain book. I am so happy for Tony about his photos being on the cover and in Joni's beautiful magazine, Texas Animal Imprints and I hope that you will subscribe to Joni Daniel's great magazine and check out the January / February issue online. And please read my column about...

Have a great evening and May The Force Be With All Of Us!
Posted by cousin nancy at 7:13 PM

Congratulations to Tony for the wonderful cover-photo! The link on the blog did not work but I found the site of TX Animal Imprint by google. I read all editions from september on and I love it. But I don`t know: What are mutts? Does it mean "mixed breed"? I could not find in dictionary.. Karin