Due to predicted thunderstorms tonight, I wrote this between three-thirty and five forty-two today and have it scheduled to post at eight-thirty tonight.

Today has been great. This morning around ten-twenty I went outside to greet Eileen Gotke, one of our dedicated volunteers and good friends. She had come out and brought along her friend Debbie, to walk our dogs!

As we visited, I told them about Karlen and Drake McLean coming out so they could give us a check to sponsor a pen, as Karlen's Christmas present, from her loving family. "I can't wait for y'all to meet Karlen and Drake. They are the nicest people and in the past years they have adopted two dogs from us. Eight years ago Drake adopted Al Gore, a really cool black Lab, who they nicknamed Al Air, because he flew with Drake, and then in 2006, Karlen adopted Terry Clark, who we had rescued from the Kerrville pound, who she renamed Chula Bean McLean. Unfortunately, Chula a beautiful, sweet- chocolate Lab mixed with Springer Spaniel—a Spanador—passed away recently and it broke Karlen's heart, because she loved Chula Bean so much. So, instead of receiving Christmas presents, Karlen asked her family to make donations to us, so she could sponsor a pen in Chula's name. The sign is being made now and it will say, "In Loving Memory Of Chula Bean McLean." They should be getting here any minute now and I want y'all to go over to Kinky's with us for a fun visit."

"We'd love too, but are you sure?" Eileen asked, as the dogs outside started barking.

"Yes, I'm sure," I half-hollered, as we saw a Jeep driving in with four, smiling people sitting inside it. "It's them! Let me go greet them. I'll be right back. Then we'll go over to Kinky's." Then I race-walked to go greet them.

After howdy and hugs, Drake and Karlen introduced me to Karlen's sweet parents Richard and Karlen, who I instantly liked, because their eyes seemed to sparkle like Karlen's and Drake's. "I'm so glad to see y'all and to meet y'all. Welcome to the rescue ranch. Kinky is leaving in about thirty minutes to take Marcie to the airport, so why don't y'all follow us (Eileen, Deb and me) over to the Lodge for a visit?"

The minute we all walked inside Kinky's Lodge the fun-fest began!

(It is four minutes past four o'clock. I will continue with my story, but Jon Wolfmueller just called me from Wolfmueller's Books and said, "Hi, Nancy. It's Jon. I just wanted to let you know that Sandy has six more copies of Easy Soup Recipes."


"OMG, John! That is great news! Please reserve two copies for me and I will come by Monday to get them."

"Two?" Jon asked. "You want two books? I thought you only wanted one to give to Ben."

"I am getting one for Ben," I said. "But, I want to get the other one as a surprise for my friend *****.  As soon as we get off of the phone I am going to send Mari, who I think, is at a dog Agility Trial in Leon Springs with the NoMads, a high priority e-mail about y'all having only four cookbooks left." John was laughing as we said goodbye and disconnected. And, I just finished sending Mari a heads-up e-mail about the cookbooks. Now back to the story about that fun-fest over at the Lodge.)

After greetings and introductions Kinky invited everyone to come into the kitchen for some fresh coffee and some of his delicious, just cooked beignets. Then he took them into his office and gave them a tour and signed books for them. This is a picture of him in his chair signing a book.

While Kinky was entertaining his guests in his office, Drake left the Lodge and quickly returned with some pictures of Chula that Karlen and him wanted me to have and I nearly teared up when I saw Chula and how beautiful and happy she looked as I thought about what a great life she had had. 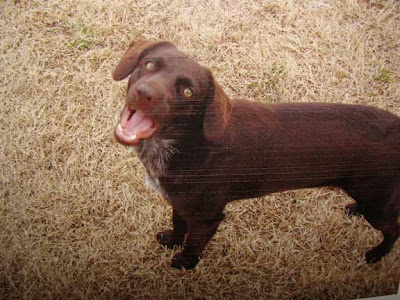 While everyone visited with Kink, around the pool table,  Karlen took me aside and told me about how much Chula had meant to her and how much she had loved her and thanked us for rescuing her. Then she told me a beautiful, heartfelt story that happened to her after Chula Bean stepped on her rainbow, but I can't share it, because it was private. Before leaving the Lodge, I took this picture of everyone, except Eileen, because she is camera shy. From left to right: Richard, Karlen, Kinky, Karlen, Debbie and Drake. 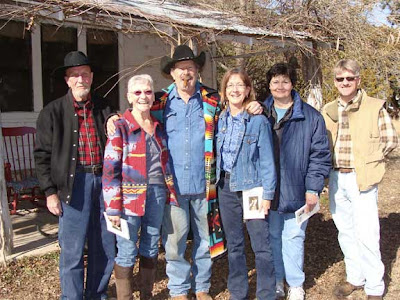 When we returned to the rescue ranch, I dropped off Eileen and Debbie at the barn as they requested, so they could start walking some of our dogs, and then I drove on up to the trailer to visit with the McLeans. Before Tone and I gave them a tour, Drake and I went inside the trailer, so he could give me the checks Karlen had received as Christmas presents to help Karlen sponsor a pen in Chula's name, and then Tony and I gave them the tour and I really enjoyed visiting with all of them. As I like to say, "They're my kind of people!"
After Drake and Karlen and her parents left to go eat lunch in Medina, Tone took off for Medina too, but not to eat lunch with them, but to get supplies at the Medina Ace Hardware store, before it closed at three o'clock.
After I put some chicken in the oven to cook for lunch, I went outside to find Eileen and Debbie, but I didn't have to look far, because they were already walking towards the trailer. "Y'all come on up!" I hollered. "I've got something I want to show y'all."
After they came inside I had a short, but fun visit with them and then I said, "Eileen, this is for your eyes only, sorry Deb—it's the second column I wrote for the upcoming "Texas Animal Imprints" magazine. It hasn't come out yet, but I want you to be the first to read it, so you can give me your honest opinion of it." Eileen sat down in the chair and began speed-reading it.
When she was done, Eileen looked up and said, "Nancy, I love it and I can't believe you wrote about..."
"I had to, because I love...and just had to write about it." After Eileen and Deb left to go eat in Medina—Tony returned home and we ate lunch.
It is now five forty-two and it has not started raining or thundering yet. I wrote this early, because I wanted to make sure it would get written and be posted tonight before I might have to  unplug everything in the trailer, because of the weather. Because tonight I am dedicating this blog "In Loving Memory of Chula Bean McLean, the greatest and most loved Spanador in Texas, because she was one of the lucky ones who will never be forgotten."
Y'all have a great evening!
Posted by cousin nancy at 8:30 PM