May The Force Be With Y'all!

This morning I was feeling a little down because of no sunshine for too many days, because I am one of those people who literally powers-up on sunshiny days. So, I've come up with a new name for people like me, who are so affected by the lack of sunshine and it is—WASP! And it doesn't stand for White Anglo Saxon Protestants. It means "We Are Solar-Powered-People!" And for all you WASPS out there reading this, you'll understand why my mood drastically changed for the better, when the sun finally came out this afternoon, as Trigger took us to Kerrville to run two errands.

Our first stop was at Home Depot, so I could buy some lumber, screws, paint and nails for my nail gun, for my upcoming Space Ship Project which is scheduled to start tomorrow afternoon, after I return phone calls, e-mails and do some paperwork, because it has been predicted that the sun will be out in full Force to power-me-up! So I guess my new sign-off for now, on e-mails etc., is going to be the same as the "Star Wars" famous saying—"May The Force Be With You!"

After we left Home Depot we went to Hoegemeyer Animal Clinic to pick up Walter Cronkite and Cowboy, but Cowboy wasn't ready to come home, because he had torn out his stitches. Here is a  picture of our new rescue ranch anchordog, Cronkite, in the front yard of my cabin. He is one great, happy dog and is so sweet. In fact, he kissed T. and me non-stop as we drove him home. Tomorrow I will take his official "glamour shot" for our web site and post it on my blog tomorrow night. Isn't he adorable! 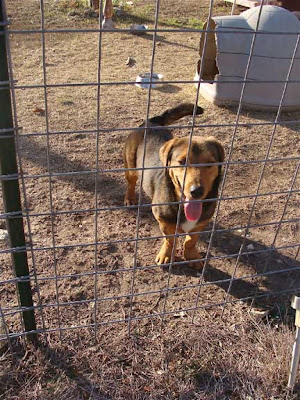 Early this evening I went over to the Lodge to visit with Kinky and he was thrilled when I told him the good news that Dustin Hoffman was being adopted on Thursday by the Kemp Family. While I was over there he showed me a beautiful, black & white photo that Billy Joe Shaver had sent to him, of Billy Joe and Kris Kristofferson standing side-by-side, in their late twenties or early thirties and I absolutely loved it. After that, we went outside and played with The Friedmans for a while. Before leaving, I offered to help Kinky gather some firewood to burn in his Lodge and it turned out that it was an offer that I should not have made.

As I finish writing this blog tonight my foot and butt are somewhat sore, because of the fall that I took when helping Kinky. And here's what happened when I picked up my very first log."Nance, that log is way too big for you," Kinky warned. "Get a smaller one." I laughed and picked up the heavy log anyway.

"I'm fine, Kink. Don't worry about it." Then I tried to take a step, but my pink boot wouldn't budge because it was tangled up in a vine, so I stepped backwards with the other foot to try to free my boot and that's when a rock shifted under my boot and I lost my balance and fell right on my butt and started laughing!

"Are you okay, Nance?" Kinky asked, with concern in his voice, as he came over to help me.

"I'm fine, Kinky," I said, before laughing, again, as I stood up and brushed off the back of my 501 Levis. "I just lost my balance, again, that's all. You know how I am always tripping or falling on something outside. And that's why I don't like to walk outside because I..."

"Well, I must say that it was a really great fall, Nance," Kinky said, as we both started laughing about it, and loaded our original two heavy logs into the bed of Kink's pickup, Mr. Green Jeans. "It was as good or better than any of Chevy Chase's famous falls. He was so good at that and..."

Have a great evening and May the Force Be With Y'all!
Posted by cousin nancy at 9:41 PM

Lori of the NoMads said...

Why I need a cookbook-

To Stop the Harassment! One copy is not enough you have to keep it in your "Special Place" where no one can find it but you!

After serving up several of the recipes from this wonderful book to friends, family and foe SEVERAL have tried to lift, remove or appropriate said book. SO... PLEASE pick me for the coveted, cooking creative compendium of tastiness.

Hi Lori of the NoMads! Thank you, for making me laugh! Have you thought about feng shui-in' some of your friends and family, so your soup cookbook will be safe? Or better yet, do what I do—copy the recipes, change their names and call them Cousin Lori's recipes!

I would like to be considered for the cookbook. My DH *dear husband* recently had bypass surgery and I am having a hard time finding appetizing foods for him to eat. I hate cooking and find I am spending too much time In the kitchen. Besides, Mari told me to enter!