I want to thank everyone for their prayers for Tony's brother, Rex. He is still in critical condition, so please keep on praying for him. And I want to apologize for not answering all of your e-mails promptly.

Today after lunch Tony and I went to Kerrville to get groceries and to run a few errands. Our first stop was at Wolfmueller's Books to see Sandy and Jon and to also pick up the two Easy Soup Recipe cookbooks that I wanted to give to Ben, and the other copy to send to my mystery friend, who doesn't live in Texas and has no idea she's getting one.

After greetings, Jon told me that Mari had come in on Monday and had purchased two more of the super, soup cookbooks. "Here are the two we held back for you," Sandy says, as she hands me the books, so I could pay for them. 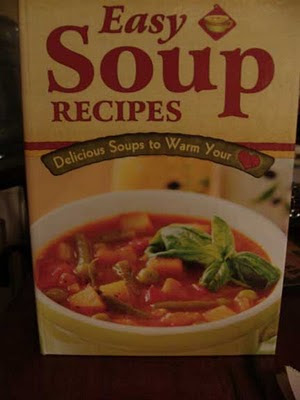 "That's great. Thank y'all for holding them for me," I said. "How many do y'all have left?" Sandy held up two fingers. "I want to buy them, too," I said. "Because I want to send one to my sister Cindy and the fourth one—I am going to give away on my blog!" Everyone started laughing in the customer filled bookstore, while nodding yes. "I was thinking about having a fun contest, for free, with my friends and the people who follow my blog, and ask them to post a Comment on my blog, using 50 words or less on, "Why I Deserve To Win The Easy Soup Recipe book" and the contest will last a week, before we decide who needs it most. It's that easy."

"We decide?" Sandy asked, as Jon kinda frowned and started rubbing his forehead.

"Yes, the four us could be the Official Judges for the contest and we could sign our names inside the cookbook, too! It'll be fun."

"But, what about Mari?" Tone asked. "She loves that cookbook, as much or more as y'all and you know she's a really great writer too."

"Not a problem, Tony. Even though I love Mari and count her as a dear friend, she'll be the only person who we won't allow to enter my contest," I quickly quipped, as we started laughing, again. "I bet she won't even care..."

We left Wolfmueller's a few minutes later when Sandy and Jon got busy checking out their customers and I have my fingers crossed that they will be Judges with T. and me.

THE EASY SOUP RECIPE CONTEST—STARTS NOW and Ends at Midnight on JANUARY 19TH—And It's FREE! All you must do, except for Mari, of course, because she has bought as many copies of this great cookbook as me, is to write in 50 words or less: "Why I Deserve To Win The Easy Soup Recipe cookbook!" and post it on my Comments section, located at the bottom of each new post.  The winner will receive the signed by the Judges cookbook and I promise that I will personally mail it out on January 20, 2011! It will be fun!

P.S. I want to thank our good friend and neighbor, Charlie Cooper for coming out this morning to help Tony with his chores. We love y'all, Charlie and Ellen!

Y'all have a great evening!
Posted by cousin nancy at 8:24 PM

I'm still laughing about my banishment from the contest! What an 'honor' - I think.

I hope Wolfmueller's gets more books in because my last two Easy Soup books - that I JUST bought - didn't make it to their intended destinations. I was waylaid and the books were removed from my vehicle. It was almost like an old-timey stagecoach robbery, only it was a new-timey Toyota Sienna robbery! My in-laws can be SO ruthless in their quests for good soup recipes!

Good morning, Mari! You should feel honored. If Sandy and Jon get more cookbooks for you, you will take my lead in buying the most soup cookbooks. And remember this, "All in-laws can be Out-Laws!"

Dear Nancy,
I think I deserve the cookbook because I am a grass widow and because I am a "Kraut".I have no appetite and no pleasure to cook for one person. As a "Kraut" I need recipes to cook something else than Sauerkraut! Love, Karin

Why I deserve to win the cookbook:

Right now, I have seven dogs at my home in Wichita, KS. One is a new foster dog that is just finishing up her heat cycle. I have one small male dog who was just neutered. If you think this don't keep me busy, do I have news for you. I don't have time for complicated recipes. I am taking care of dogs and settling doggie arguments!

Cousin Nancy, I think I NEED this cook book, because my wonderful Husband Sandy thinks soup is a appitizer & should be followed by a steak or BIG hamburger & fries. I 've been trying for 27 years to convince him that SOUP can be a meal in itself. ME ME ME
I LOVE SOUP!!!

Hi Karin, Dogmom (Mary) and Garnet. Thank y'all for entering the contest and for making me laugh out loud! I loved reading your hilarious comments and I can't wait for Jon & Sandy and Tony to read them!