From last night's blog:
To Be Continued...Will it be Lori, Of The NoMads, Displaced In Texas, Dogmom, Garnet Sheffield or Anonymous aka Lynda Peters who won the contest? And also find out tomorrow about our lunch with Lori and Mari, which lucky dog found his fantastic, forever home, late this afternoon and what happened and what we got when Carol and James came over to see us, early this evening and lastly, what Kink had to say when he called me, a couple of hours ago, from Nashville!


"The winner of the Easy Soup Recipes cookbook contest is Lynda Peters!" Mari declared, then she called out the scores of each contestant and all of us were amazed about how close their scores were. Then we had a fun visit before Mari took off in her van and we followed her, in Trigger, to the restaurant where we were to meet Lori, of the NoMads for lunch.


As soon as the three of us were seated at our table, Mari and I started talking non-stop about organic food, organic seeds, made in America products, and dogs, etc., while T. sat back in his chair and munched on some chips and salsa, as we waited for Lori Graham, of NoMad and Cowboy Steak House fame, to arrive. Then Mari shocked me with some scary news.


"The other day while I was shopping at a grocery store in Kerrville, I discovered that many of the cheaper "store's brand" foods are not products of the United States."


"Who won the cookbook contest?" Lori asked, as she removed her coat.


"Not you," I jokingly, quickly quipped, and then we all started laughing. After we gave our waitress our orders I said, "By-the-way, I want to thank y'all and the NoMads for sponsoring a pen at the rescue ranch. Y'all are so nice and please thank all the NoMads for us and..."


While we ate and enjoyed our delicious meals—Lori, Mari and I continued to talk non-stop about how much we loved The RockBox, in Fredericksburg, while Tony spoke not a single word. When it was time for us to leave the restaurant I asked where our check was, because Tone and I wanted to treat them to lunch, but we found out that Lori had already paid it. Thank you for lunch, Lori!


When we came home Carlton was flashing on the breakfast bar, because Rose had called earlier to say, "Mom and I are leaving Kerrville and nearly there. We brought Dunn with us to see how he and Dustin get along. I hope it is okay. Bye." So, I pulled Dustin's paperwork from the files and quickly wrote up his adoption papers. Ten minutes later Rose and her mom, Sharon, arrived with Dunn!


After howdies and hugs we drove down to Dusty's pen and introduced the two dogs by taking them on a short walk to see how they got along. As we walked I thanked Rose, once again, for the dog toys that she had made for our dogs and then Rose blows me away, when she tells me that she and her friends wanted to do even more to help our rescued dogs, so she and I discussed some cool ideas, as we happily watched Dustin and Dunn become best buds. Before leaving the ranch, Sharon handed me a sack full of assorted Girl Scout cookies, which made T. and me happier than we already were about Dustin being adopted by Rose and her wonderful family, so I took this picture of Rose with Dusty and Dunn before Rose climbed into the backseat to ride with "The Boys" for their two hour drive back home. Thank you, Rose, Hannah, Sharon and Kevin—we love y'all! 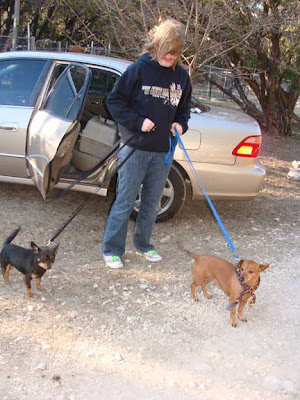 After Kermit took us back to the trailer the first thing T. and me did was open up a box of Girl Scouts Thin Mints! After I ate one cookie and Tony ate two, we decided to invite Carol & James over for a visit, because it had been way too long since we had seen them. In fact, the last time we got together was when they taught me to weld and use a plasma cutter.
Twenty minutes later we went outside to greet our good friends. After howdies and hugs Carol handed me a big plastic bag of her famous homemade cookies, that she had baked just for us—the ones that we love so much, that have caused T. and me to fight over the last one.
Tony and I love Carol & James so much, because they're like family to us, because we can go a long time without seeing or hearing from each other, because of our busy lives, and then when we finally get back together—we can't wait to catch up with each others news. So, as we drank coffee inside Nellybelle—it was non-stop fun and laughter, as we took turns telling each other about our latest escapades and fun adventures. Right before dark they went home and we hated to see them leave, but the good thing is—we are going to go on a double-date with them next month, to a comedy club in Kerrville and we can't wait!
Kinky called me from Nashville, a little before eight o'clock last night, to find out if Dustin Hoffman had been adopted, because I had forgotten to call him after Dusty got adopted and he was thrilled when I told him, "Yes, Kink. Dustin is the graduate today and..."
Okay, y'all it is eight-thirty and I am fixin' to go watch "The Mentalist" which I recorded last night while I was writing my blog, because Carol and James love the show and told me that I would love it, because we are all hooked on "Lie To Me."
Today has been more than fantastic too, but I will write about it tomorrow. And, I want to thank every one for their sweet notes and kind words about Thunder's passing. I love y'all.
Have a great evening and May The Force Always Be With Y'all!
Posted by cousin nancy at 8:33 PM

I can't STAND it. The suspense is just KILLING me. Will Dustin be renamed "Brooks", so as to be the perfect partner for Dunn?

Congratulations to Lynda for winning the cookbook-contest! Thank you very much for your great gift. At last I have no longer eating sauerkraut every day and I will be prepared for Texas food when I will come for a visit and see you all. I hope it will be soon, at the latest next year, Karin