They Were Smiling At Us!

Today has been great, but all I have done is paperwork. So I guess that you could say it was a boring, tedious day.

Yesterday morning when I went outside to help Tony with the morning chores, I went into Mandy's and Bandy's pen and no one came running to greet me, like our other dogs do. Mandy and Bandy are brother and sister and they are over 14 years old, so I really didn't expect them to come running. But usually they do walk over to see me, but they didn't yesterday.

Bandy was sleeping next to the side of their dog house and Mandy was inside sleeping. I called to Bandy as I filled his food dish and he looked up, but didn't get up. So, I went to the dog house and knocked the doorway, gently with my boot, but Mandy did not respond.

I knocked on the front door two more times, but I got no response from her. I bent down to pet her and she didn't respond to that either.

Tony was near the barn, so I asked him to please come check on Mandy, because over the past year both of those dogs have really slowed down and become more frail. Seconds later, Tony told me that she had passed away.

Of course I teared up. Then Tony told me that he was going to go up to The Cabin to call his brother Sam, to ask him if he could over to help him bury sweet Mandy, because his back was out.

When Tony took off, in Kermit, I said a few words to Mandy and then to Bandy. Then I left their pen to go feed Rocky & Rockette, who were anxiously waiting to be fed. And most of the day I was pretty down about her passing, because she was a super dog.

In her younger days, she and Bandy would jump out of their pen and sneak down to the creek and go swimming and then they would come back and jump back into their pens. We caught them doing that several times over the years and it would make us laugh.

In fact, one summer day, many years ago, Tony and I were, in Trigger, going over to visit Kinky. When out of nowhere Tony slams on the brakes, because those two had run up to greet us and they were soaking wet and as far as I am concerned, they were smiling at us and wagging their tails, which everyone knows means they were laughing.

Here's to good times Mandy. You were loved by many. Rest In Peace girlfriend. 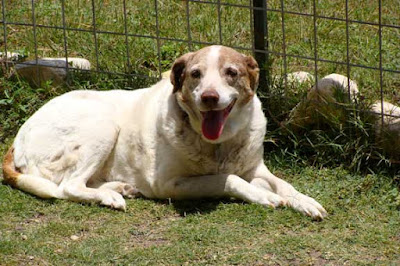 In the early evening, Chet came over to visit with us and his kind words and awesome mandolin playing shooed my blues away, thank goodness, because I can't stand being down.

Anyway, after Chet left I decided to work on my third novella, instead of blogging, because I am very near to finishing it. I wrote and wrote until 1:00 AM and then I made myself stop and go to bed. And that is about it for tonight.

Y'all have a great evening!
Posted by cousin nancy at 6:59 PM