Today has been great and so were Friday and Saturday. Friday afternoon after eating a delicious lunch, at Thai Ocha, with our good friends/volunteers, we went to Hastings, because I was on a personal mission, because over the past several months I've had at least five different friends ask me if I had seen the movie Matrix and then tell me that I must watch this movie. Then I discovered that it was not available for streaming on Netflix or Amazon Prime Video.

So when we went to Hastings I asked the first employee I saw if they had the Matrix. And five minutes later, we had purchased a used, rental copy of the Matrix and it only cost me $3.99. To say the least, I was thrilled about getting it so cheap. 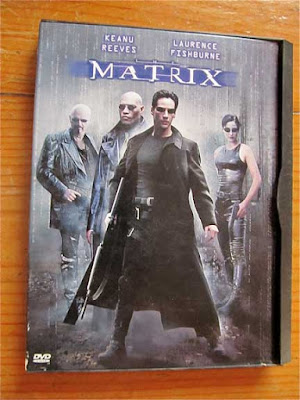 When we got back home, after putting up the groceries, I sat down and watched the Matrix, with Little Debbie sleeping on my lap. I liked the movie, but it was a little too violent for me, because I don't like watching violence.

After watching the movie I called all of my friends that had highly recommended that I watch this movie, as soon as possible, to let them know that I had actually purchased the Matrix and had just watched it. Then I bragged about it only costing me $3.99.

Then later on that evening, at 7:05 to be exact, I decided to surf the television channels and I about fell out of my chair when I saw a channel airing the Matrix and it was only five minutes into the movie. So, I walked down the hallway to Tony's office, and said, "Guess what? The Matrix just started and it is on Channel *&#." Then we both started laughing about me buying it. "Can you believe that?"

This afternoon after we grocery shopped, at the big H-E-B, we went to Gibson's so I could purchase a tortilla press, because since Saturday I have been determined to learn how to make homemade flour tortillas, because we had eaten some delicious fresh, homemade flour tortillas, at the new BBQ place, Williams Creek Trading Company, which is in the Old Timer's parking lot. And this is what I bought. 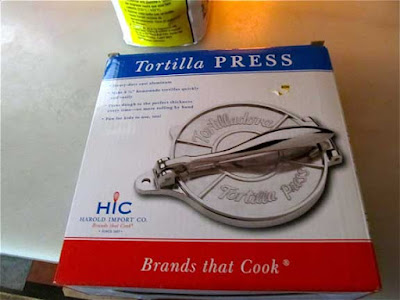 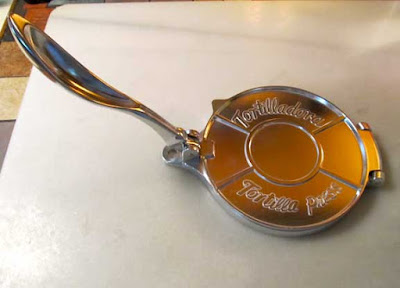 When we got back home I started mixing the flour with the ingredients to make tortillas and that's when Tony suggested that I stop and Google a YouTube video on how to use a tortilla press. I thought he was kidding me, but he wasn't. "Tony, it looks pretty simple to use. I just raise the top, put a ball of dough, in the middle and then press down."

"Oh, I see. I hadn't checked it out." Then he wished me good luck with my flour tortilla project and then he grabbed his camera and went outside to greet Karon and the sweet kids that had come over to walk our dogs for us.

I carefully followed all of the directions on how to make flour tortillas and I am proud to announce that my first batch of homemade, flour tortillas were absolutely delicious! I loved them and so did our dogs. And please note that I am also a pro when it comes to using a non-electric, high-tech tortilla press. In fact, I am thinking about making a YouTube video on how to use one of them.

A few hours later, after Karon and the sweet kids had left, Tony came back inside The Cabin. When he asked me how my tortillas had turned out. I pulled out some warmed tortillas, in the oven. "You tell me," I said.