Today has been great. This morning I got a phone call from the nice couple that adopted Judy Collins, yesterday. Yes, Judy Collins was the mystery adoption dog that I wrote about last night. Here's a picture of her when we rescued her. 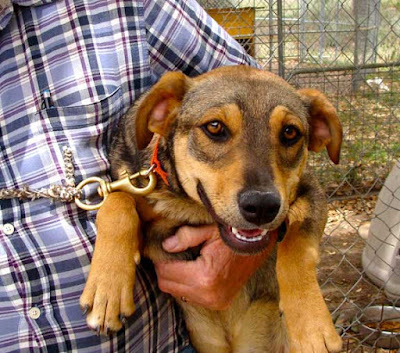 The husband told me that they are in love with Judy and that she is getting along great with their older dogs and cats. He told me that she was fitting in beautifully. And last night she slept on their bed with them and the rest of their furry family. So needless to say, "Their news made my day great." Here is the picture I took yesterday, with Judy and her new, super loving family. 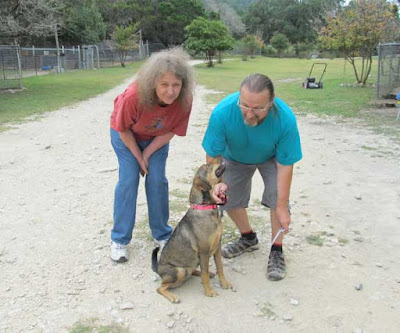 This morning we had an appointment to take Aggie to Dr. Lindstrom's, Bandera County Veterinary Clinic in Medina, because she needed to get her shots. Aggie is a sweet dog, but sometimes she has some fear-biting issues, because we believe that the woman who threw her over our fence, never socialized her or had anything to do with her.

Anyway, when it was time for us to take Aggie in for her shots, Tony had already put a large crate for her, in the backseat of Trigger. "Tony, Aggie is probably going to be nervous from the get-go. She rides great in cars and we don't need the crate, because it will just make her more nervous." So Tony reluctantly removed the crate.

When it was time to load Aggie into the truck, she amazed Tony, because she immediately jumped into the backseat and sat down. Then we took off for Medina.

When I went into the famous store, I greeted, Melinda, the cashier and then I told her that I needed to buy two Jimmy Dean micro-wave egg, cheese and sausage biscuits, to give to our dog Aggie, after she sees the vet. The friendly woman smiled and then she told me where to go find them.

Then I made a complete fool out of myself, because I haven't owned or operated a micro-wave oven in over ten years, since I discovered that they can be harmful to our health for many reasons. And if my memory serves me correctly, I think we gave our last micro-wave oven to either Ben or to Kinky.

As the nice cashier is checking out a customer, I tried to open the micro-wave oven's door, but I could not get the door to open. "I'm sorry," I said. "Can you tell me how to open the door?" Then I laughed and quickly explained to her and the man that I am old and it's been years since I've used a micro-wave oven.

"Just push the button, at the bottom, on the right side. It's hard to see, because the panel is black." So I pushed the button and the door immediately swung open. Then I start looking for the micro-wave instructions, on the frozen Jimmy Dean micro-wave egg, cheese and sausage biscuits packages. "I'd just micro-wave them for about a minute," Melinda suggested.

One minute later, I paid for Aggie's breakfast treats and then Melinda put them inside a plastic bag for me to carry, because they were still very hot. "By the time you walk down to Lindstrom's clinic they should be cooled off enough for your dog to eat."

As I was walking down the street, nearing the hardware store, a truck slowed down behind me and I heard a man ask, "Can I give you a ride, young lady? Are you lost?" Then I heard him laughing.

It sort of startled me, because it has been a very long time since I have hitchhiked. I cautiously looked over and it was our good friend Charlie teasing me. "Hi Charlie! Thanks for the offer, but I'm not hitchhiking today. I'm just going to the vet clinic..."

As soon as Dr. Lindstrom had given Aggie her shots Tony started to take her outside. "Tony here are Aggie's treats for you to give her for being such a good girl," I said. Then I joked, "And please don't eat them. They're for Aggie."

After I paid Aggie's vet bill, I went outside and climbed inside Trigger. "Nance, I've already given Aggie one of the biscuits and she loved it and she even licked the melted cheese off of my fingers. I think we should give her the last one, right after we put her back inside her pen, as another reward for being a good girl." And that's exactly what we did, too. And that's about it for tonight.

Y'all have a great evening!
Posted by cousin nancy at 6:01 PM