Cake To Bake! or Just Bake It!

Today has been great. This afternoon we met our dear friends Kris & Jim and Denise & Les for a delicious lunch, at Classic Burgers. And of course we had a blast catching up with our friends.

During our fun lunch, Kris, Denise and I started talking about recipes, recipe books, etc. and Denise started telling us about a cool cake recipe that she was pretty sure that she discovered, in Parade magazine.

When she started telling us about this simple to make, white polka-dots on the inside the cake, delicious-sounding cake, to bake for the 4th of July, I told her that I could not wait to try it, because tomorrow is Tony's birthday and we had already planned to go by the little H-E-B, following our lunch. So I announced, "I'm going to make it today, as soon as we get back home. And I kept my word.

To make this cake all you need is a box of red velvet cake mix and glazed, sour creme donut holes. 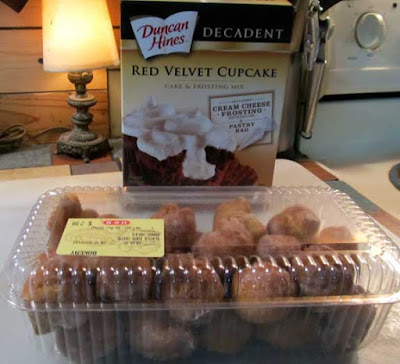 I started making the cake as soon as we got back home. I was talking to a friend, on Speakerphone, while I mixing up the cake batter and somehow the receiver accidentally fell into the soap suds, in the kitchen sink. And we were immediately disconnected.

I know that you're supposed to put cell phones into a bag of rice, when it gets wet, but I didn't have any rice, so I immediately removed the battery pack and then I took the the water-logged AT&T receiver outside, in hopes that the temperature outside would dry it out.

When I put it on the front porch rail, the screen was all fogged up. Thirty minutes later, when I went back outside to check on the receiver, the screen was only half foggy. And that gave me hope that the receiver might not of had an accidental drowning and be pronounced dead.

Then I came back inside to finish making the cake. Denise told us that you pour 1/2 of the cake batter, in a pan, then you add as many donut holes, as the cake pan will hold. Then you pour the remaining batter over the donut holes to cover the holes and then you bake it.

Forty five minutes later the cake was baked and ready to come out of the oven to cool. So after I removed the cake, from the oven, I went back outside to check on the receiver and all of the fog was gone from the screen. So my hopes grew.

Thirty minutes later, Chet showed up, so we invited him to eat some "5th of August" cake, with a scoop of vanilla ice cream, with us and that is when I forgot to take a picture of the cake.

Anyway, we all agreed that the cake was totally delicious and each slice showed the polka-dots (Cut in half donut holes.) And it was really cool.

A few minutes ago, I went outside to grab the receiver, because I figured that it had baked long enough. It would either work or we could bury it. 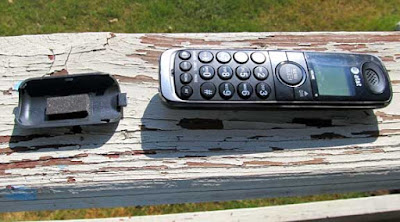 I plugged in the battery pack and closed the back panel and then I took a deep breath and pressed the on button. And it worked! The screen was totally clear and so was the dial tone! I was thrilled, so I went back into Tony's office and handed him the receiver. "Please press the on button," I said. And Tony was shocked that it was working.

So my advice to y'all, if you don't have rice—just bake it, in the sun, for a few hours. And that is about it for tonight, because I need to go make a phone call. (And please note the phone receiver is not dirty, because I washed it in the kitchen sink earlier—those are just glares off the window.)

Y'all have a great evening!
Posted by cousin nancy at 6:21 PM

Nancy, I can go you one better for a cake to tie-dye for!

Put in a search for Duff Cake Mix - Tie Dye (it is sold in various places, but Amazon has it).

And prepare to be DAZZLED.

I received a box as part of a birthday gift from my friend Polly in Utah - one of your blog's devoted readers. I'm saving it for the Abilene Dog shows, as their theme is ALWAYS tie-dye! So I haven't yet tasted it (and there are online recipes for tie-dye cakes that might taste better - who knows?), but just to see it leaves one amazed!

Hi Mari! I will definitely google the Tie Dye cake and give it a try when my jeans aren't so tight fitting. And I want to do a shout out to your good friend Polly, "Hi Polly. Please come see us and bring my dear friend Mari and The NoMads with you!"