The last few days have been great. They were busy days for me and I was just too tired to blog, but I do want to give you an update on Aggie, etc.

Yesterday afternoon around 1:45, I grabbed Aggie's shot records, my camera and a letter that I needed to mail, then Tony and I adios-ed our family dogs and went outside to go get Aggie.

When Trigger pulled up to her pen Aggie was excited and wagging her tail, because she knew that something was up.

As planned I leashed up Bella, her sweet neighbor and then I took her to the back of her pen, so Tony could leash up Aggie and get her out of the pens, without Bella trying to kiss them.

When Tony went inside Aggie's pen she ran up to him and immediately sat down. It was obvious to us that she could not wait for him to put a leash on her, because the last time we did that she had enjoyed eating Jimmy Dean Sausage, Egg and Cheese biscuits.

After Tony got Aggie out of her and Bella's pens she could not wait to get into Trigger's backseat. It was amazing to us how smoothly it went.

Miss Aggie rode beautifully in the backseat and when we got to Medina, we stopped, at The Old Timer, so I could go inside and buy and micro-wave her four, delicious Jimmy Dean Sausage, Egg and Cheese biscuits.

I was able to get the door open, but since life is not always fair when it comes to micro-wave ovens, I had to ask the nice, friendly cashier to please come over and help me cook Aggie's good behavior rewards, as Sam, my sweet brother-in-law, watched from the picnic table, chuckling at my ignorance.

When I finally got back inside Trigger, Tony immediately gave Aggie a biscuit and then we took off, to go meet Sharon Griswold, by the camel, at Camp Verde.

We were early when we arrived, so we took Aggie out of the truck, so Tony could feed Aggie another biscuit for being so good. 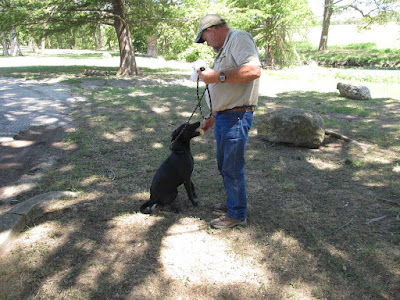 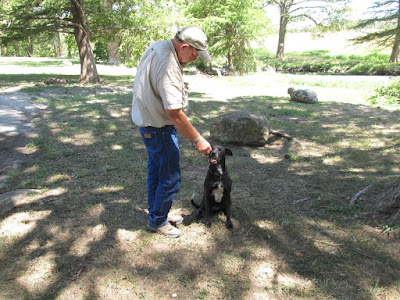 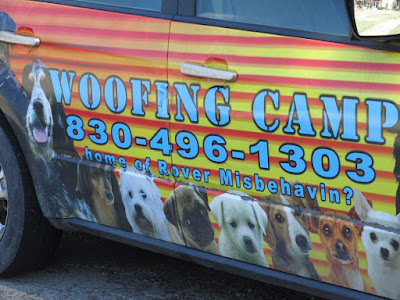 After hugs, we gave Sharon Aggie's two, still warm biscuits and then we introduced her to Aggie. Aggie liked her instantly and because she was not acting nervous Sharon fed her a biscuit. Then we went around to the back of her van, so she could open the hatch. And to our surprise Aggie jumped inside it before we could even ask her to load up.

As Aggie calmly sat down, inside her van, Sharon and I stood there talking, for about thirty minutes, about Aggie's issues and how Sharon was going to work with her. 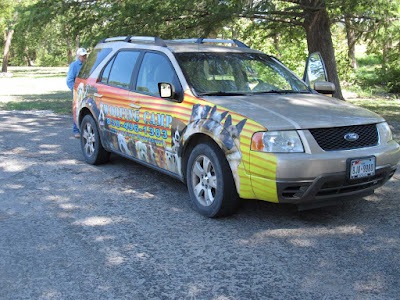 When all was said and done, Sharon closed the hatch and Aggie seemed totally fine about it and then we adios-ed each other and drove off in different directions.

We've got our fingers crossed that Sharon can work her magic on Aggie, so this sweet three-year-old dog will be much more adoptable and I hope that y'all will cross your fingers for Aggie, too.

This afternoon we had a really great surprise. Our good friend Aaron came out to possibly adopt a dog from us. "If y'all don't mind, I would like to go walk around the pens, by myself, to see which dog grabs me and  tells me that he wants to be my dog." We told him to take a hike.

Fifteen minutes later, Aaron told us that he wanted to adopt Tom Landry! And to say the least, "Tony and I were more than thrilled about his choice, because Tom is one great dog and he has been with us a long time."

After Aaron signed Landry's adoption papers, he and Tony put Tom's dog tags on a new collar and then leashed him up. Here is a cute picture I took of Tom and Aaron celebrating. And the other one is of Aaron moving things around, in his vehicle, so Landry could ride up in the front seat with him, before he and Landry took off to go swimming. 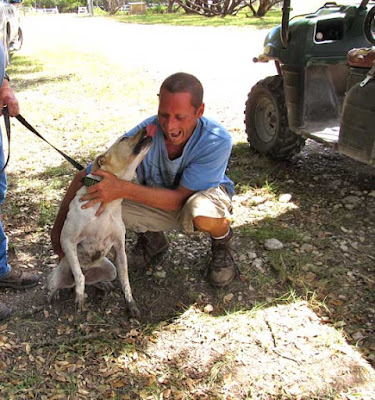 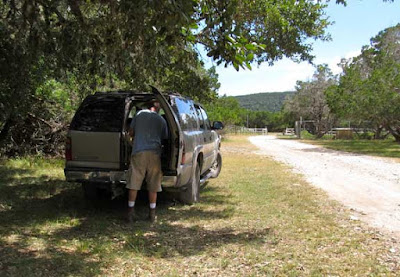 Before Aaron and his new best friend took off, Aaron told us that Landry will be his constant companion and go everywhere with him. "Everyday Landry will go to work with me, to the park and swimming. And he will sleep with me, too." Which was great news even though Tony and I already knew this, because we know how much Aaron loves his dogs.

Before I finish writing this I want to show you an awesome picture that Tony took a few days ago, in The Okay Corral and I think it should be titled Close Encounters. And that's about it for tonight. 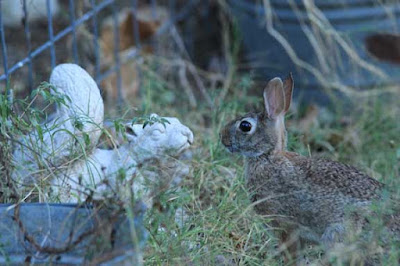 Nancy, you should win the "caption this" prize for Tony's cute photo! Great choice!

Hi Eileen! I love Tony's picture and pictures. He is one with his camera. Thank you for the comment.