Today has been great. This morning a nice man and his wife wanted to know if they could come out and look at our dogs, because they were interested in adopting an older dog, because they have two elderly dogs and one of them is blind and deaf. And you can guess what my answer was.

They arrived around 11:30. I knew I liked them, the instant that we greeted and welcomed this super nice, friendly couple, to our rescue ranch.

We visited outside for a few minutes. They told us that they were wanting to adopt a medium-sized, female dog and if they adopted one of our dogs, she would have a 1/2 acre fenced in yard to play in, that she would be a house dog and sleep with them, on their bed, as long as she would get along with their small dogs and grandchildren. Then we took off to give them a tour of our rescue ranch.

We started on Ben Stiller's & La Toya's side of the ranch and when they met beautiful Lois Lane they fell in love with her, but they still wanted to check out the rest of our dogs, before making any decisions.

While we walked around the rescue ranch, they told me that they don't have a problem with Pit Bulls, and the man said, "We love Pit Bulls. They are such great dogs. It's people that make them bad." And Tony and I totally agreed with them.

When we were winding up the tour, the last dog that we introduced them to was sweet Ginger. As  they petted Ginger, I jokingly whispered, loud enough for them to hear, "Turn on your charm, Ginger. This could be it." Ginger totally understood my words, because she immediately became much more charming if that is at all possible, as Tony and I continued to brag about her being such a fine dog.

A few minutes later, the husband asked his wife, "Which one do you want to adopt?"

She was still petting beautiful Ginger and she turned around, and said, "This one. I think we should adopt Ginger. She is...." Then I jumped into Kermit and said, "I'll go do the paperwork and be right back."

Then her husband remarked, "I need to go up there to get our car and drive it up here to Ginger's pen." So I invited him to hop inside Kermit and go with me. He jumped in.

After I had finished doing Ginger's adoption papers, I walked outside and our dear friend Jim, "The Mineral Man" was walking up our steps. We had talked earlier about him coming over, around noonish, to drop off a Nascar book for me to read and a couple of jars of his delicious, homemade, canned, pickled peppers for Tony. "Hi Jim!"

"Jim, Ginger has just been adopted. Why don't come with me, so you can go meet this really nice couple. I really like them and...."

After we had introduced everybody the woman filled out Ginger's adoption papers.

It was so hilarious when they opened their driver's side door, because Ginger jumped inside so fast, it was like a flash. Seriously, if you had blinked you would have missed her leaping into their car and immediately sitting down, on the passenger's front seat. "Looks like Ginger can't wait to get out of here, too." Then Jim, Tony and I started laughing, as we waved goodbye to one very lucky Boxer.

So y'all please keep y'all's fingers crossed that sweet Ginger's adoption sticks and that she will get along with their other two, much older, small dogs.

5:00 Update:
The sweet woman that adopted Ginger today just called me and she sounded very sad, "Nancy, I'm so sorry, but Ginger is not working out. She seems like she wants to kill our little, old dogs and we're scared that she will. We are exhausted from it all and are going to have to return her. But maybe another one of your dogs will work out...."

I am sick that Ginger's adoption didn't stick, but that is the way it goes sometimes. Sometimes it just wasn't meant to be and Tony and I fully understand that and we appreciate this nice couple giving Ginger a chance.

5:45 Update: Ginger is now back at our rescue ranch. And like I just told her outside, "Don't worry. It just wasn't meant to be and that happens sometimes. Your perfect fit is probably just around the corner, so hang in there." And she seemed to understand. 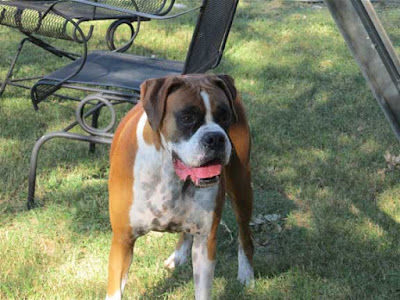 Y'all have a great evening!
Posted by cousin nancy at 7:01 PM

Ginger will find her forever home and she'll get to have all the attention as the only dog! We want Ginger to have a home like George!

Hi Eileen! Ginger is a fabulous dog and I bet she finds her fabulous (one dog only) home sooner than later. Thanks for the comment.