Today has been great and it was pretty uneventful, so I am going to tell you about yesterday, which was a great day, too.

Yesterday, while Tony and I were eating a delicious lunch, at Billie Gene's, I told Tony that I wanted to buy one of those little Hibachis, so I could grill, on our front porch, instead of cooking on our big grills, in my pink cabin's front yard. Tony was not enthusiastic about it.

So after lunch we ran several errands. Our first stop was at the Post Office substation. Then I went to the craft store, in the same parking lot, to buy a small box, super glue and an inexpensive, battery powered engraver, because Sunday morning I had watch an interesting story about a man making beautiful boxes, with inlaid precious stones, on the Texas Country Reporter. 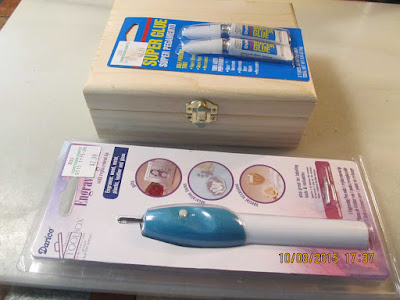 After I had made my newest hobby purchase we went to one of our favorite stores, in Kerrville and it was also in the same parking lot. When we walked inside Wild Birds Unlimited, Marguerite and Trish greeted us. While Tony shopped around and checked out their superior birdseed, I had a fun time visiting with Marguerite and Trish.

We talked about Marguerite's and our dogs. She bragged about Scout, Odie and Mini and I bragged about Little Debbie, Alice, Roy, Belle and Beau. Then I told Marguerite that I wanted to buy a small Hibachi and that we were fixin' to go to Gibson's to see if they had one.

After Tony bought his big bag of birdseed our next stop was at Gibson's. And guess what I bought! 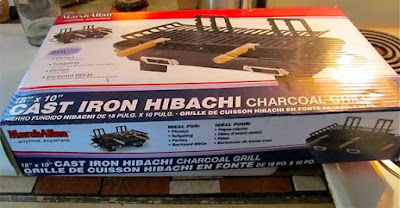 Then we went to the big H-E-B and then we came home.

Then I spent about an hour doing paperwork, returning phone calls and e-mails and then I assembled my Hibachi, on the drainboard, all by myself. And I was pretty proud. 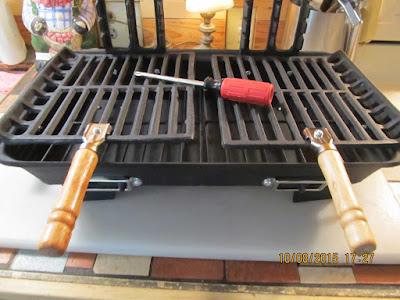 After Tony removed it from The Cabin, I began working on my newest project. First, I stained the small box and sat it outside, on the front porch rail, to dry.

About forty minutes later I inserted two AA batteries, inside the mini-engraver and then I started practicing engraving on the stained, practice box. It took me about thirty minutes to accomplish this little bit, because the small engraver was easy to use, but it was not as powerful as my Dremel is, which I temporarily couldn't find. Anyway, as soon as I locate my Dremel, I can work much faster. 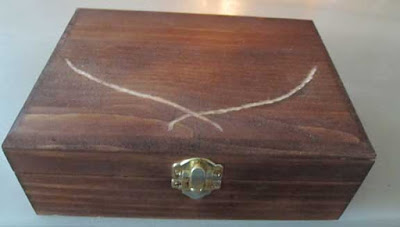 This afternoon we cooked on my Hibachi for the very first time! Right off the bat—Tony appointed himself to be the official fireman aka cook, which was totally fine with me, because I don't mess with fire if at all possible and I also needed to get things ready for our lunch.

Chet, Tony and I ate a delicious lunch. We had loaded baked potatoes which I only make us twice a year, because of so many calories. Homemade pinto beans, avocados and bacon-wrapped, ground sirloin steaks, better known as the Poor Man's Filet Mignon. And to say the least, they cleaned their plates and I only ate half of my steak and loaded baked potato, because it was way too much food.

After lunch Tony kindly removed our Hibachi, with its super hot coals and he put it outside our front yard, so our dogs wouldn't be tempted to check it out. 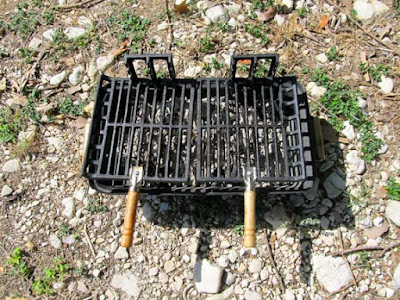 I plan the rest of my evening writing. And that's about it for tonight.

Y'all have a great evening!
Posted by cousin nancy at 6:54 PM