Today has been great. This afternoon Kinky called me. He called to invite Tony and me to join him and our dear friend Donna Hatch, the fabulous author and editor, at The Kerrville Daily Times, to eat lunch with them, at Thai O'cha restaurant, because they were celebrating the fabulous article, that appeared in today's newspaper, that our friend, Phil Houseal, had written for Donna about Kerrville's favorite Thai restaurant. I immediately said, "Yes. It sounds like a lot of fun and we love that restaurant. And it's perfect, because we have several errands to run..."  Here's a picture that I took of today's Kerrville Daily Times' story. 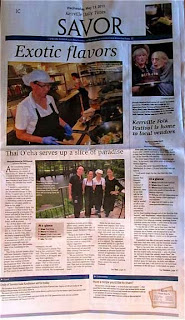 Oh my goodness, our lunch with Donna and Kinky was so much fun, as always. As we sat and enjoyed eating our delicious, healthy Thai food, we laughed and joked about all kinds of things. Of course, I did so much talking I was the very last one to finish eating the #4, on the menu, that Tony and I had both ordered. He and I do that all of the time, so I guess that makes Tony and me a cute couple. And I love it, because it always drives Kinky crazy, because we do it so often and he thinks it is" totally ridiculous."

During our super fun lunch I told Donna about my newly purchased guitar and I asked her to please tell her sweet husband, Ryan, about it, because he is one of my jamming-buddies. Donna's eyes lit up and then she told me that Ryan had signed up to take the fabulous, 3-days Kerrville Folk Festival's Root's & Blue's workshop, but unfortunately he wasn't going to get to go to it. "Nancy, I've already bought the tickets for it. Would you like to go to the Roots & Blues Guitar Camp? Ryan would love it if you do! And you've got your new guitar to play!"

Before I could even take a breath, I said, "Yes, I would love to..." Then I inhaled and nearly fell out of my chair, because I was so excited about attending this super cool workshop, even though I know that I will probably be the "old woman and worst player" there.

After eating the delicious Thai food, we looked outside and it was raining cats and dogs outside, so Tony says, "We better get back to the ranch now, before the heavy rains start to flood and lock us out." So we canceled our errands and immediately came back home. Here is the complete story that Phil Houseal wrote for Donna for The Kerrville Daily Times and because I had to cut and paste it together, some of it is not layed out exactly like the newspaper's better version, but here it is anyway. 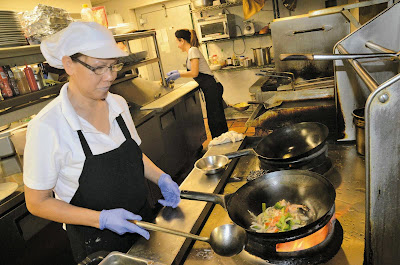 Thai O’cha serves up a slice of paradise

Story and photos by Phil Houseal
Special to The Times

After considering opening restaurants in several locations, the owners of Thai O'ocha, 417 Water St., decided it would be best to work on running one restaurant well. To the good fortune of local lovers of Thai cuisine, they decided that would be Kerrville.
“I wanted to concentrate on only one location,” said Opal, the 29-year-old manager of Thai O’cha. “I cannot split my body. I want to make sure the food when it comes out needs to be perfect — everything needs to be perfect. Maybe we will open another in three to five years.”
“Opal’s” Thai name is Sarin. She explained it is Thai tradition that everyone goes by a nickname. The owner and chef at Thai O’cha is her mother, Sudjai, known as Jai.
Ju, Jai’s niece, and Song, Ju’s friend, work as servers. 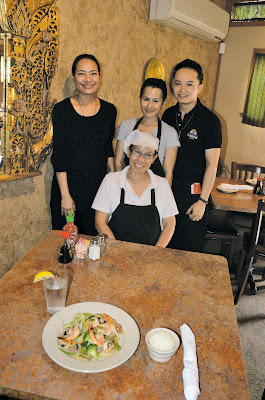 But all that diners really need to know is that Jai worked as a chef for more than 30 years, first at a hotel chain in Thailand and then in Marble Falls, after the family immigrated in 2009. Opal has a degree from Thailand in international studies, and she wants to eventually earn her master’s degree here. She handles most of the translating for her family.
Thai O’cha features Eastern décor with lotus blossoms, a figure of the Buddha and statues of elephants, a revered animal among the Thai people. Patio seating overlooks the Guadalupe River. Why did Jai decide to open such a restaurant in Kerrville? Simply because there was no Thai cuisine in this Hill Country community, she said.
“She wanted to present Thai food to this community,” Opal said. “Thai food is healthy, uses lots of herbs, is all organic and uses fresh ingredients.”
Their signature dish is pad ginger. “Pad” in Thai cooking refers to a range of stir-fried dishes, complemented with any meat or seafood. The foundational ingredients include green onion, yellow onion, carrots, broccoli, Chinese mushroom, celery, and, of course, ginger, thickened with corn starch.
Being in the heart of Texas requires the staff to make some accommodations to ingredients, but they insist on using fresh, organic vegetables.
There are other differences they have discovered are expected when cooking Thai food for American appetites.
“We use authentic Thai recipes, but sometimes we cannot find the same ingredients, so we try to adapt American ingredients,” Opal said. They look to use gluten-free sauces, and make the portions larger.
While the stir-fried dishes remain most popular, their menu includes more exotic fare such as roast duck, spicy curries, papaya salad, tofu steak, and sticky rice.
They have also had to adapt to the American need for speed. Jai prepares each entrée separately as it is ordered. The vegetables are seared quickly in a gas-fired commercial wok, cooked within a few minutes. They have learned to prepare in advance double the amount of ingredients they think they will need, so they are able to turn out the orders very quickly.
Another adaptation is teaching Texan servers the ways of Thailand.
“Now they know Thai food, and they love Thai food,” Opal said with a laugh. “They had never had it before. Now they have started eating spicy food.”
American diners will appreciate that dessert and drinks with a Thai meal are more than an afterthought.
Thai iced tea is a flavorful mix of tea, sweetened condensed milk, and coconut milk that is neither tea nor milk yet more than both.
Desserts include fresh-made fried banana rolls, black sticky rice rudding and a diner favorite, mango ice cream: Fresh frozen in small batches, it is made of fresh mango, coconut milk, fresh cream and sugar and then served with fresh cubed mango, and topped with a cashew. Decadence never tasted so healthy.
While Thai O’cha’s reputation continues to grow, Kerrville residents need not fear losing this restaurant, as long as Jai has anything to say about it.
“I love Kerrville,” she said in quiet, careful English. “It is comfortable, a small town, and the people are nice."

When Tony and I got back home I immediately plugged in my computer and went to look up the information about the upcoming Kerrville Folk Festival's 3-Day, Roots & Blues Guitar Camp. I am now even more excited about attending it that I want to thank our dear friends Donna and Ryan for letting me go to it, because they are two of my favorite people on our planet.

Y'all have a great evening!
Posted by cousin nancy at 6:45 PM

IT IS A GREAT PLACE I WILL BE GOING TOO. HAVE THE BEST TIME COS IN NANCYSO GLAD YOU GOT YOUR NICE GUITAR TOO AWESOME!

Hi Anon! We love Thai O'cha, in fact we ate lunch there yesterday too, with our good friend, Jim, "The Mineral Man" and he loves their food too. Maybe we will see you there sometime. I am so glad that I got my guitar too, because I love playing it.