A Light In The Shadow!

Today has been great. I am sorry for not posting a lot the past few days, but I have been more than busy working on several (some temporarily secret) projects, at the same time, that will be benefiting our rescue ranch, while everyday also trying to mow down the tall grass with Tony. I am not complaining—I am just explaining.

This morning our great friends/dog walking volunteers came out and walked our dogs for us. Then all of us went up to the Medina Highpoint Resort's Koyote Grill to eat lunch together. And as always lunch was delicious and a whole lot of fun.

We got to watch June's cute granddaughter sing, in a school play, on Ellen's iPad. Then June told us an hilarious story about her and her husband's trip to Australia, that involved walking across a pasture filled with cows, calves and kangaroos and then she did an laugh-out-loud reenactment of how her husband had done it.

Then Ellen started telling us hilarious stories about different snakes, she'd met in her lifetime. Two of the funniest were when she found a snake coiled up, in her kitchen drawer, that she finally was able to release outside. And my favorite one was when her uncle or relative was working, in a barn, he found a big long snake mixed in with the hay. So he started wrapping it around his rake, so he could fling it outside. And right when he flung it outside the barn door—his son entered the barn and the middle of the snake's body hit the kid, in the neck and then it started wrapping itself around the poor boy's head. "Fortunately, neither the snake or the boy were harmed," Ellen said. "And to this day that relative still wonders about it really being an accident or not." Suzanne, Eileen, Kris and Jim also had funny stories to tell, but there's not enough time to write about them. Anyway, lunch was a total blast.

My dear friend Cindy Pickard, who has received several awards on her outstanding documentaries, is  working on a fascinating, informative documentary film, in progress, on Prisons: the inmates, their families, the guards and those who teach and bring light to the darkness. It is called A Light In The Shadow and Cindy has let me view some of the interviews, etc. and I absolutely love what I have already seen of it. So I asked Cindy to please let me know if there was anything that I could do to help her with this awesome documentary.

Two days ago, Cindy wrote and told me that she had launched the documentary, A Light In The Shadow, on Kick/Starter. So, I want to invite everyone to please check it out, because you're going to like what you see. 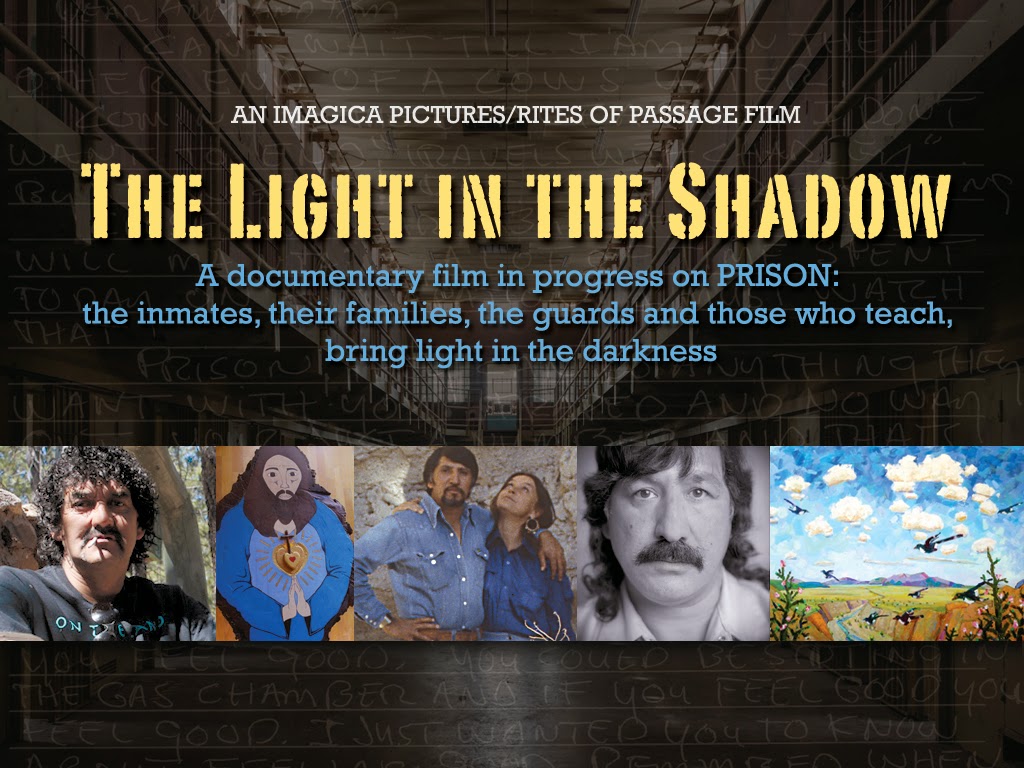 And please note that Cindy is using some of Chet O'Keefe's fabulous music, in the documentary and that I have just made a pledge to help fund it, too. And I hope that y'all will too after you check it out.

Unfortunately, now I must go back outside and help Tony do some more mowing, etc., so I guess that's  about it for tonight. Hopefully, by tomorrow I will be feeling more rested and will be caught up with the mowing, before F.M.T. (Full Moon Time) on Sunday, May 3rd.

Y'all have a great evening!
Posted by cousin nancy at 4:35 PM