Today has been great and so was Saturday. Early Saturday morning I received an exciting e-mail from our dear friend Dennis Lanning. A while back, on February 7th to be exact, Dennis and his good friend David came out to visit us and they drove their brand new BMW motorcycles, because they were preparing and trying to be in the best of shape for their long distance motorcycle trip they had been planning to go on.

Dennis' e-mail was short. All he wrote was this, "We Made It!" And he sent this picture of him to prove it. 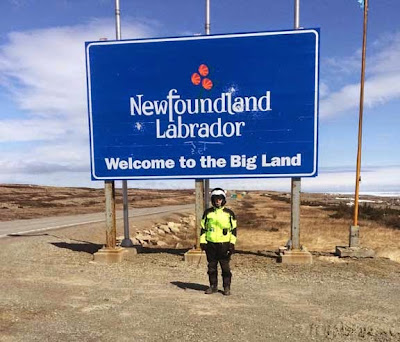 Tony and I were so thrilled for him and David, because they had actually ridden their BMW's from Austin all of the way to Labrador, Newfoundland. After Tony looked at this photo, he jokingly teased me and said, "He's not a poser like you are, Nance. He and David actually did it." And all I could do was laugh, because I knew Tony was right.

Late Saturday morning we had a surprise visit from a very old girl friend and it totally made my day great. In fact, it still warms my heart when I think about it and I've been thinking about it often. Here's the story.

Tony and I were down at the creek trying to figure out how to remove a giant tree next to the dam, when we heard our dogs start barking. "Somebody must have arrived at the rescue ranch," Tony said, as he started Kermit, so we could go greet whoever it was.

When we pulled up, a nice, friendly couple was parked, in front of my pink, writing cabin. As soon as we welcomed these nice people to our rescue ranch, this woman says, "I'm Heidi and this is Dan."

"Howdy Heidi. You must be the woman who called me earlier this week about wanting to know our Saturday Open House hours," I said. After we shook hands with the couple we got to talking about the recent flood, mowing, etc. Then they told us that they had a surprise waiting for us, sitting inside the back seat of their car.

As Tony and I looked into the window of their car, Dan said, "I don't know if you remember me or the dog that I adopted from y'all, because it was in 2002 right after that really big flood y'all had had?" Y'all had named her Suzi-Q."

"Omg!" I said. "I remember that horrible flood. We had just moved the rescue ranch from our place, in Utopia, to here on March 3rd and then it rained and rained the entire month of June. I remember Suzi-Q's name, but I'm sorry that I don't remember her story. We've rescued a lot of dogs since then and she's the only Suzi-Q that we've ever had."

So Dan tells us that if he remembered right we had rescued Suzi-Q from a river. She was about one-year-old and that she had only been with us for a couple of months or so when he came out and adopted her. Then Dan slowly lowered the window, so we could meet Suzi-Q again.

Suzi-Q wagged her tail when we started petting her, as Dan and Heidi told us that she has been the greatest, coolest dog that they have ever had. Then they introduced us to Bella, the sweet, rescued, Rhodesian Ridgeback mix therapy dog. "Bella has been a therapy dog with Divine Canines since May 2006, earning her AKC Distinguished Therapy Dog title in July 2014-an honor reserved for dogs with more than 400 hours of therapy dog service. She and Galena love each other and they get along great together."

"I renamed Suzi-Q, Galena," Dan said. Tony and I had a super fun, long visit with Heidi and Dan and then we went over to the Lodge, so Kinky could meet Suzi-Q/Galena and Heidi & Dan and Bella. To say the least, "Kinky was thrilled to meet Galena and hear her story and he also enjoyed meeting Bella, Heidi & Dan." Here is a picture that Heidi took and sent to me of Dan and Galena along with her note: 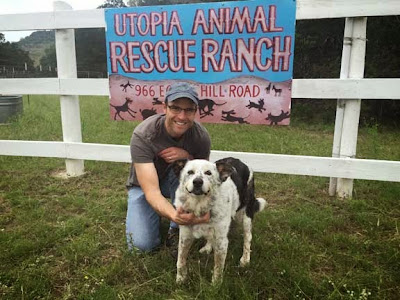 "Hi Nancy,
We had such a wonderful visit! Thank you for spending time with us. We enjoyed the conversation, meeting Tony, and saying hi to Kinky.
Galena has had a dream life, and she has been such a good friend. She is friendly to all people and other dogs. We can always trust her to manage other dogs appropriately.
We love that she still has spunk at more than 13 years of age.
Thank you for rescuing her, and thank you for being you (and Tony too). Y'all are angels. We appreciate you and Tony, Heidi"

Yesterday afternoon after mowing, I sat down and played my new guitar for over an hour and a half, because I want my fingers to be ready for the exciting, upcoming, Kerrville Folk Festival's 3-days Roots & Blues workshop that Ryan and Donna Hatch gave to me.

This afternoon after lunch, we took Lucille, the sweet, Boxer mix, to Hoegemeyer Animal Clinic, so she can get her shots, spayed, etc. And that is about it for tonight, because after I take off my hiking boots, I am fixin' to start playing my guitar, so I won't look like a poser with a fancy guitar, at guitar camp. 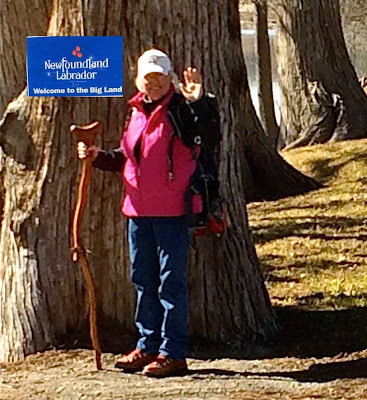 P.S. After Dan and Heidi left with their precious cargo I checked our adoption records and found out that Dan adopted our Suzi-Q/his Galena, on July 20, 2002.

Y'all have a great evening!
Posted by cousin nancy at 7:38 PM

Nance! You're almost an official Newfie, you just need to be Screeched in 'By! I was thrilled to read about your pals riding their BMWs all they way to NFLD!!! WOW!! That's a beautiful part of Canada, but very cold and isolated most of the year. Newfie jokes are rampant up here, kind of like redneck jokes... for instance:
Q. Did you hear about the Newfie who locked his keys in his car?
A. Took him 2 days to get his family out. LOL