Today has been great. This morning our super volunteers aka friends came out to walk our dogs and while they were busy making our dogs happy, I jumped into Trigger and went over to the Lodge, because Kinky wanted to talk to me before leaving on his thirty-day, back-to-back European Bi-Polar Tour.

After a short visit with Kinky I returned to the rescue ranch and checked Carlton's messages. "Hello, Nancy. This is Tucker and we're...." I immediately called our good friend Tucker, that Rick, "The Friendly Lighthouse Keeper," had introduced us to last year. Then I called Kinky.

"Kinky, Tucker just called and he is coming to see us...and he is bringing his friend, because his friend is thinking about adopting one of our dogs." Then I went outside and Jim introduced me to his son, Mike, who was visiting him and his wife. Then I found Eileen and Suzanne and went on a dog walk with them, which was a lot of fun.

When we got back and they had returned Red Skelton and Lulu to their pen, Tucker arrived. After howdies and hugs and then being introduced to his friend James and James' grandson, Charlie, Tony and I gave them a tour of the rescue ranch. And the good news is, in a couple of weeks James is going to come out and adopt one of our super sweet Pit Bulls!

After a fun lunch in Medina, at the Apple Cider Store, with the volunteers, Brandon, Tucker, James and Charlie we returned to the rescue ranch. Because Tony needed to take care of few things, Brandon took a break, so he and I could record his song, The Cowgirl Sisterhood Theme Song, for a video  that I am making to help promote my first novella and future novellas. When I told Brandon that I was going to give him credit at the end of the two minute video, "Song by Brandon and performed by Brandon and Nancy." He was thrilled.

Then he said, "No. Use, Song by Bama and performed by Bama and Cousin Nancy." So I agreed to use his nickname, since he is from Alabama. Then we went into my writing cabin and played his song until we had three good tracks to mix. Then we were interrupted by Tony and our recording session abruptly ended, because The Ice Man, our refrigerator's freezer had had a total melt down. Everything inside the freezer had melted and had to be thrown away.

Brandon helped Tony pull The Ice Man out into the middle of the kitchen and then he and Tony got busy cleaning the coils. It took them about thirty minutes. 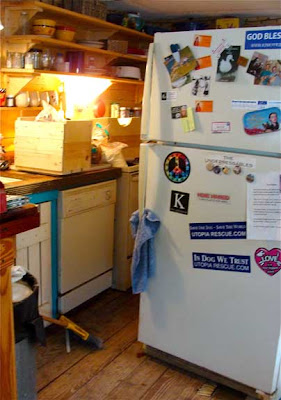 Then Tony plugged The Ice Man in and they pushed him back into place. While I was putting everything back on top of The Ice Man, Tony went over to talk to Kinky. When I was done, Brandon and I went back out to my writing cabin aka The No Budget Recording Studio, to work on the tracks.

Forty minutes later, Tony walked inside my pink cabin with some good news to share, "We have eight ice cubes! We don't have to buy a new refrigerator, thank goodness."

I was thrilled about it and said, "The Ice Man Liveth!" And that is about it for tonight. Hopefully, this weekend I can find the time to work on my second novella.

Y'all have a great evening!
Posted by cousin nancy at 8:09 PM