Today has been great. This afternoon we met our friends Kris & The Mineral Man for lunch at all of ours favorite Mexican food restaurant—El Sol de Mexico. We got there first and when we walked inside we saw our good friend, Fourth, sitting at a table with his friend, so we decided to sit at the table right next to them so we could visit.

While we were visiting with Fourth, Kris and Jim walked into the crowded restaurant and I waved at them. When they got to our table I said, "Guess what? Fourth's here, too." Then they said hello to Fourth and sat down.

"We have a gift for you, Nancy," Kris said. The other day, Jim and I were were on the Internet and when we saw this, it had your name written all over it, so we just had to buy it for you. Here." I took the pink box and looked at it and then all of us started laughing. "We also have some ammo for you, too." Then she handed me a sack of ammo and this is what they gave to me! 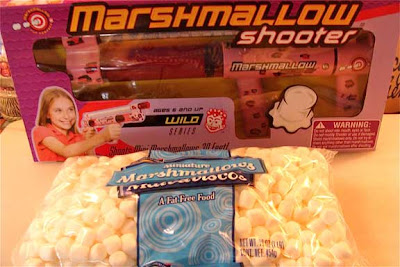 I loved my pink Marshmallow shooter and could not wait to try it out! "It says for ages 6 years and up," I said, followed by a laugh. "Then it is definitely for me and it shoots mini marshmallows 30 feet. And says do not eat marshmallows after shooting."

As always our lunch, with them, was a lot of fun. When we started talking about the popular TV, hit series, Duck Dynasty, that they and Tony watch, we could not quit laughing when we started trading hilarious stories about squirrels, alligators, etc. Jim's beaver story was so outrageously funny it made my back start to ache, because I was laughing so hard.

When our friends Karon, Dalton, Elle and Natalia showed up, I took my loaded weapon outside, so I could show it off to them and they got a big laugh out of it, too. When I tried to shoot a mini-marshmallow at a nearby tree—nothing happened. So, Dalton reloaded my new shooter for me, while he and the girls ate my white, puffy bullets. Then I had fun shooting the marshmallows.

When I was nearly out of my first round of ammo the little marshmallows started melting, because it was hot outside, so I came inside and soaked my magazine tube in hot water. And I haven't reloaded it, because Tony told me to never leave my gun loaded. Here's a picture I took after cleaning the magazine. 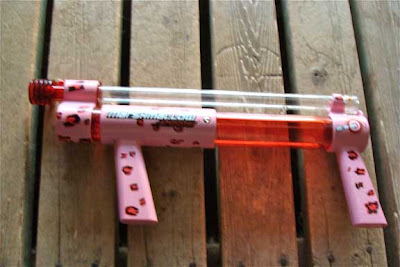 After I had put up my shooter, my dear friend Sandy Wolfmueller called me. "Nancy, when is Mercury in retrograde end?"

"Let me check it out and I will call you right back." After I had checked it out I called Sandy right back. "M.I.R. ended on the 17th, but it will linger out and it will be totally over by the 24th, thank goodness..."

Early this evening, Kinky called me and invited me to come over for a visit, because both of us have been very busy since he returned to the ranch. While I was over there we sat on his front porch and talked about life in general and then we took The Friedmans for a short hike. And that is about it for tonight, because I need to write. But before I go, I must admit that I will sleep much better tonight, because of my Marshmallow shooter. "Thank you, Kris & Jim!"

Y'all have a great evening!
Posted by cousin nancy at 8:21 PM