Today has turned out to be great, even though the last couple of days have been pretty hectic, because of it being FMT (Full Moon Time).

The best thing about yesterday was receiving the adorable magnet that my dear friend, Mari, mailed to me. I love it and it's on our refrigerator as I type this. Here is a picture of it on our kitchen table. 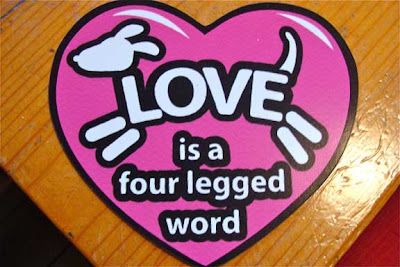 The reason that I didn't write anything at all last night was because Tony needed my help to show him how to make a slide show of his beautiful nature pictures, for the Riverside Nature Center, in Kerrville. And we had a lot of fun working on it.

This morning I did the Utopia Animal Rescue Ranch segment on Big G's popular morning radio show and it was a lot of fun, too. His Pet of the Week was Buffalo Gal aka Buffy.

After that, Kinky called me from the airport to talk to me about his sweet dog, Sophie, because she has been staying at Hoegemeyer Animal Clinic since last Thursday, because she had been throwing up and not feeling well. The good news is, she and Kinky will both be back at the ranch by the time I finish writing this.

This morning it was pretty chilly outside while Tony and I did our chores and when I came inside to check my e-mail, a dear friend of Kinky's and mine had asked me to please print out something for Kinky, which is no big deal, because I do that quite often for Kinky.

I thought that it would only take a minute or two to print it out, but our friend had sent it in a language that neither my Adobe Photoshop, Acrobat, Microsoft Word, Pages could open. When I tried to open the attachment up using Numbers, it opened but was the size of 36" x 22". Determined to resize it, I spent over one hour, because I've never used the Numbers software before and the end result was I could not figure out how to do it. So, to say the least, "I was more than frustrated with myself for not being able to print it.

About that time Tone walked inside The Cabin and happily says, "I want to treat you to lunch. We'll go anywhere you want to eat." I took a deep breath. "Are you okay?" I counted to ten as I shook my head sideways.

After I explained my frustration and being mad about wasting so much time this morning, I finally said, "Let's go. I really need to take a break and another Aspirin." Before we left I sent our friend a brief e-mail confessing that I could not open their attachment and was sorry for being so stupid. Then we left The Cabin.

We ate lunch at the Highway 16 Cafe, in Medina and it was delicious. We had a fun visit with Tony's older brother Sam, as we ate the cafe's daily Special, which was Spaghetti, dinner salad and carrot cake.

When we got back home I was in a better frame of mind. When I checked my e-mail, our friend had sent me a sweet note and had also resent the attachment in another, easier format—.gif. When I tried to open the attachment I got the same results that I had earlier and I could feel the frustration coming back, so I sent our friend another note about not being able to open it.

Minutes later I received an e-mail with it copied & pasted into the e-mail and a few minutes later, it was printed and ready for me to take over to Kinky's Lodge.

I wrote this earlier today, because of the effects that FMT has on me. I also wrote it earlier today, so that I can hopefully get some more writing done in my novella, Part II, A Death In New Mexico, so that is about it for today.

Y'all have a great evening!
Posted by cousin nancy at 4:17 PM