Today has been great. This morning before Tony and I went outside to do our chores, I was nicely surprised, because a FedEx showed up with my one-hundred-twenty-five pot pie pans, because I wasn't expecting them to arrive until late this afternoon. 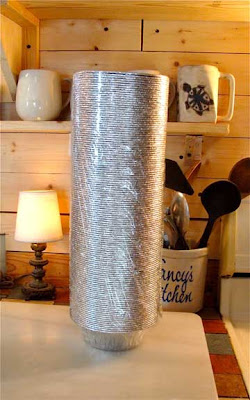 So, before we went outside, I grabbed a pretty green and white ribbon and made Carol, the other member of our exclusive cowgirl sisterhood, a hat. (If you haven't read my first novella you will not find the humor in this.) Anyway, as soon as I finished making it, Tony and I went over to Carol's to deliver it to her. When she saw it, she could not quit laughing. And she even asked me to take a picture of her wearing it, before we left to come back to the rescue ranch to do our morning chores. Here is Carol's custom hat, before we took it to her. 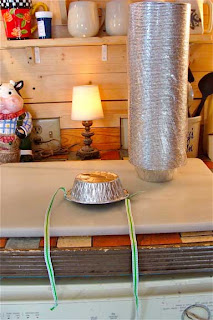 Late this afternoon, after doing a bunch of rescue ranch paperwork and returning several phone calls, I decided to become a card-carrying member of another kind of club. I went Online and signed up and became an official member of Costco. Even though I will never set foot in one of their many stores, because I don't do big cities, I can still save money and have my purchases shipped directly to me.

Later this afternoon, Tony walked inside The Cabin and said, "You need to call Kinky and tell him that I had one Hummingbird show up yesterday and three just showed up. in The Okay Corral." So, I called Kinky, as Tony stood nearby.

When I told Kink what T. had asked me to tell him, Kinky laughs and says, "Tell Tony that I am putting mine outside right now and tomorrow he will have no Hummingbirds."

When I told Tone what Kinky had said, he laughed and said, "Tell Kinky that I am going to put up fifty more Hummingbird feeders in the next few days." When I told Kinky that he started laughing.

"Tell Tone that The Hummingbird Competition has begun and I will definitely be the winner!" After we had quit laughing about it, we adios-ed each other.

Tonight I plan to make a few more pot-pie hats for my friends until I run out of ribbon and then I plan to write some more funny scenes in my, The Cowgirl Sisterhood: Part II: A Death In New Mexico, cliffhanger.

Y'all have a great evening!
Posted by cousin nancy at 8:04 PM