Today has been great. This morning our super volunteers/friends: June, Lisa, Jim and Kris & Jim aka "The Mineral Man," came out to walk our dogs for us and our dogs loved it and so did we.

Then all of us went up to Koyote Ranch's Koyote Kafe to eat lunch together and we had a lot of fun as always. When we took turns talking about some of our worse first dates experiences I could not eat, because I was laughing so much.

Around 1:30 our dear friend Rick called to tell me that he was in the Hill Country and to ask if he could camp out in my writing cabin for the night and I told him, "Yes, of course..." Then I grabbed my bread machine out of our bedroom closet and carried it into the kitchen. Then I followed the easy bread recipe directions and then pressed the start button to bake a loaf of bread. Then I pulled a tray of country ribs out of the refrigerator and used Brandon's delicious rib recipe to prepare them and then I shoved the ribs into the oven to bake for a few hours.

At 2:30 our dear friend Ruth and her daughter arrived right on time, with the cute little pup that she had rescued yesterday. He is an adorable 13 weeks old little Beagle/Heeler, which I guess would make him a Be-He.

Yesterday morning Ruth had called me before 8:00 and she told me about this little pup that she had rescued, that had just been attacked by a big dog and the pup was either going to be put down, in two hours, if she could not find someone to take him or he would have eye surgery to remove his eye.

Even though we are still at capacity out here I told Ruth that we could take him. So yesterday morning, instead of him dying, this sweet, vivacious little pup had his eye surgery, was neutered and given his first puppy shots by her veterinarian—at no cost to her or to us.

I have named this little guy, Babe Ruth and he is sleeping soundly, in his crate, that is right next to me, at the kitchen table. Tony and I plan to keep him in The Cabin with us until he he is finished taking all of his pain medicine and Amoxicillin. If any of y'all know someone that might be interested in adopting Babe Ruth from us, please tell them that this adorable, playful, highly intelligent pup is going to turn out to be a super-dog, because of all that he has already been through.

Here are a few pictures that I took of "The Sultan of Swat"with Tony and Rick in the Okay Corral earlier and inside his crate with his purple squeaky toy. 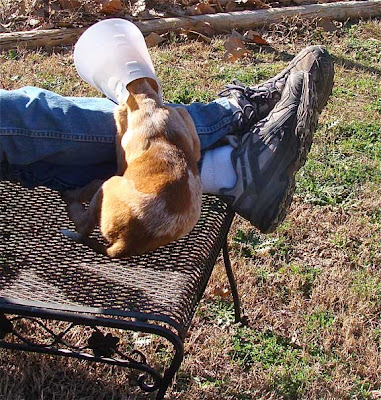 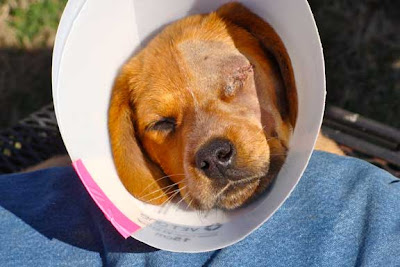 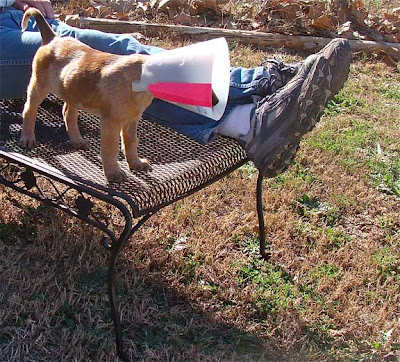 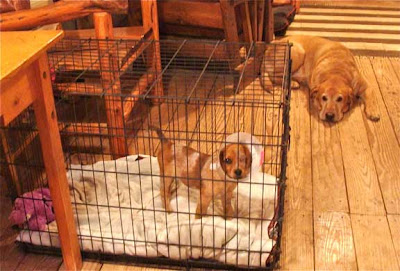 Y'all have a great evening!
Posted by cousin nancy at 7:33 PM

Mari of the NoMands said...

Cousin Nance,
You Missed Your Chance!
(I'm a poet and didn't know it!)

You should have named this cute puppy "Jeebie", then it would have been the HeBe Jeebie!

He is so precious, what a sweet boy! Best wishes for a speedy recovery and a great family for him to grow old with.
Fay xo