This weekend has been a total blast. Yesterday morning, Patsy & Jerry, the nicest couple, that had told me earlier in the week that they wanted to come out on Saturday to possibly adopt one of our dogs, did as they had said.

After showing them all of our dogs and having a nice visit with them, Patsy told us, "We definitely want to adopt Jethro Tull. Earlier in the week when we had looked at your website and I saw Jethro, Jerry printed out an 8x10 of him for me. I knew he was the one the minute that I saw his picture and..."

When Jethro's adoption papers had been signed, in The Okay Corral, Tony and I jumped into Kermit and they followed us in their big, fancy pickup to Jethro Tull's and Tuesday Weld's pen, so Tony could put their collar and leash on him.

After Tony had put Jethro's dog tags on their new dog collar for him, Tony put Jethro in the alley and put on his new collar and leash and Jethro was uncontrollably happy about it, because I know he knew that he had found his forever-loving family. When Tony came out of the alley with Jethro I took this picture of them and then Jethro jumped into the backseat of their four door truck, because he could not wait to go to his new home and never see us again. And it made Brandon laugh.

When I returned to The Cabin the phone rang and it was Kinky. "Nance, I am at the airport. I've decided to come home a day early and I should be back at the ranch late this afternoon." Which thrilled me. Then I thrilled Kink when I told him about Jethro's awesome adoption and how much Tony and I had liked the couple who adopted him. 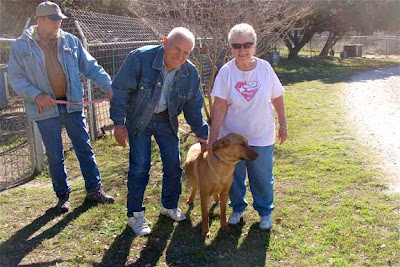 A couple of hours later, while I was in the kitchen slow-cooking Tony's, Brandon's and my lunch. the coolest people showed up. Jon had called me on Friday about coming out to see the ranch and because time had gotten away from them, they called me back and asked if it would be alright if they would come see us on Saturday instead.

The minute they showed up in their RV with their two adorable Pugs and two beautiful cats, I liked them already. Jon and Karen had driven all of the way from Portland, Oregon with their pets and they were driving all of the way to North Carolina, before turning around and heading back home.

When I invited them to come inside The Cabin they loved it. "Who's the guitar picker?" Jon asked, when he saw my guitar leaning up against the wall. When Karen told me that he was in a band, I told them all about Brandon being an extremely talented musician. Then I invited them to stay and eat lunch with us, so we could get to know them better. Then we went outside to The Okay Corral.

While Tony finished cooking the bacon wrapped bananas and ribs on the grill, Jon and Brandon started pickin' and grinnin'. Oh my goodness, they were fantastic. They played everything from Eric Clapton, Creedence Clearwater Revival, Lynrd Skynrd, The Allman Brothers, The Eagles, Alabama, John Prine, Merle Haggard, Willie Nelson, etc. and because they were so talented they had all of us smiling and wanting to hear more. 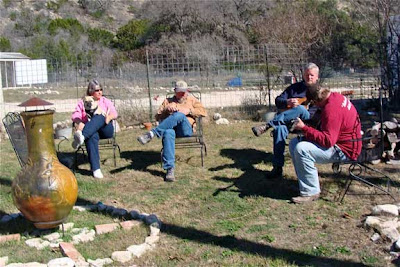 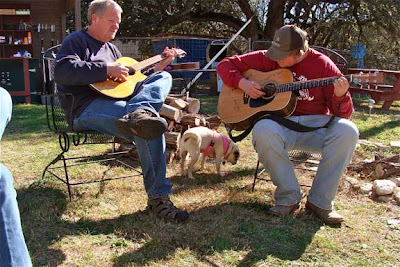 While we sat around the table eating ribs, roasted brussels sprouts covered with delicious Better Than Good Bacon Jam sauce and partially mashed potatoes we traded funny stories back and forth. While we were eating Karen's mouthwatering, homemade carrot cake for desert, we started talking about odd food combinations. and how much they loved eating Tony's Bacon Wrapped Bananas. "Have you ever eaten a peanut butter burger?" Jon asked. Brandon, Tony and I shook our heads sideways. "I know it doesn't sound like it would taste good, but it is our favorite and..."

After our filled-with-laughter picnic ended, we begged Jon and Brandon to play some more music for us and they were so great. As they mesmerized us with their beautiful music, I told Tony, "This beats any out door concert that I've ever been to. And it's happening in The Okay Corral!" As they performed some of our favorite Kenny Loggins, Willis Alan Ramsey, Beatles songs and played the Blues, I thought to myself, "It just doesn't get any better than this." And I think that everyone else was thinking the exactly the same thing.

A few hours later, after Tony had taken Brandon home, Jon and Karen helped me clean up The Okay Corral and when we were finished, the four of us sat out in The Okay Corral and had another fun visit, until Kinky returned back to the ranch. Then we went over to the Lodge, so they could meet him and have a short visit with him.

They had a great time meeting Kinky and before we left the Lodge, he signed several copies of "Cuddles Epilogue." So, to say the least, "Yesterday was a wonderful day and I am so glad that Jethro got adopted and we can now say that we have four new friends to add to our long list of friends: Jerry & Patsy and Karen & Jon."

Today I made Peanut Butter Burgers and they were absolutely delicious. And when Brandon, A.J. and Karen came over this afternoon I cooked one up for them and to their surprise—they loved it, too.