Today has been so great even though I talked to much again, which of course is nothing new. This morning around 11:00, I called Kinky to see if his new friends, from California, that he had met on his West Coast Bi-Polar Tour had arrived, because I could not wait to meet them, so I could thank Laura and her husband Patrick for sponsoring one of our dog pens for $1,000.00.

Kink had told me earlier this morning, that they were great people and they were big time animal lovers—especially dogs. His actual words were, "You're going to love these people. They are definitely our kind of people. And last night when I joined them at the Cowboy Steakhouse for dinner, Cecilie and her husband Mark gave us a $1,000.00 check to sponsor a dog pen for a year, also and they have named the pen, "A Friend In Need" and..."

"That is fantastic news, Kinky! Now what are their names again, so I can remember them?"

"I'm going to drive them over there now and drop them off, so they can meet y'all and see our rescue ranch."

"Okay, bye." Then I quickly wrote down on a piece of paper LP and MC and slipped it into my Levi jeans rear pocket, in case I forgot their names, because at my age I am bad at remembering names, etc.

When they arrived, Kinky introduced me to the super cool couples and then he joked to them about me remembering their names as LP and MC. "Now Nance, when they get bored just send them back over to the Lodge, because we are going to Medina to eat lunch at the Cider Mill."

I looked at my soon to be new friends and joked, "Okay. That should take less than five minutes." Then Kinky adios-ed us, jumped into Mr. Green Jeans, his pickup and drove away with his friend Dylan.

Oh my goodness, I instantly fell in love with LP and MC and I felt like we were family and had been  best friends forever. "We brought you gifts from California," Laura said. Then she handed me a sack with See's Famous Old Time Candies and a can of See's Extra Fancy Mixed Salted Nuts and a Devil Mountain Wholesale Nursery t-shirt, which Laura and Patrick own. "The delicious nuts, chocolates and t-shirt are made in California, USA," Laura told me.

"Thank y'all," I said. "I love anything that is made in the good ole USA!"

Then we came into The Cabin, because I wanted them to meet Toto, Mama, Belle and Roy and to show them our super cool thirty-year-old trailer, that I am so proud of and love. We had a fun visit with them for over an hour and then I gave them our grand tour, which included going into Outer Space, my writing cabin and meeting all of our dogs and telling them their stories.

Thirty minutes later, when they got bored with us they adios-ed us and they went back over to the Lodge to go eat lunch with Kinky, in Medina. But before leaving they told me they would come back over after lunch, so we could hang up Laura's and Patrick sign and they kept their word. Here is a picture Tony took of us after Brandon had hung up their sign with their prayer flag, on Martha Stewart's pen. From left to right is Patrick & Laura, guess who and Mark & Cecilie. 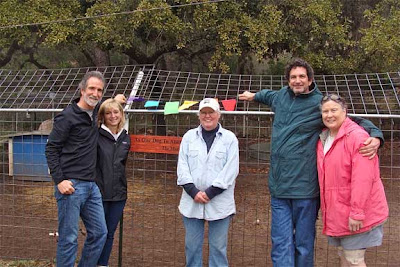 Then we went back to The Cabin and had another fun visit, before they left. Five minutes later I punched in Kink's phone number and told him how much fun I had had with LP & MC.

"I knew you would like them," he said. "Why don't you come over here and visit with them some more?"

"I can't, because Brandon has finished working for us and he and I are fixin' to record some more of his songs. Please tell LP and MC I hope that we get to see them sooner than later..." Then Tony adios-ed Brandon and me, because he needed to go to the Medina Community Library, for his and his friends first photography club meeting.

While Tone was gone, Brandon recorded and re-recorded and then mixed three really great songs that he had written and they were absolutely fabulous. When Tony returned home, Brandon played his three songs for T. and it blew Tone "out of the saddle," so to speak. Then Brandon and I burned his super songs to another one of my pink colored Cd's and we titled that CD, "Brandon! Live From The Utopia Animal Rescue Ranch," because during the recordings you could hear Toto walking on the vinyl floor, Mama barking and Roy snoring in the background. And that is about it for tonight.

Y'all have a great evening!
Posted by cousin nancy at 9:24 PM