Today has been great. This morning as soon as I did my chores outside I came back inside to catch up on a little paperwork and return a few phone calls. As soon as I was caught up with my rescue ranch work I started writing again, because I am on a roll with it and am now over halfway there to finishing, The Cowgirl Sisterhood: Part II, A Death In New Mexico.

While I was finishing up the hilarious part about Jimmy Jordan I was laughing and then I screamed, "Tony! Come quick! A giant spider just fell from the ceiling and it landed on a page of my printed novella, that I was editing."

Then I grabbed my camera so I could take a picture of it, as Tony stared at it and began chuckling. "It's not a spider, Nancy. It has wings. Spiders don't have wings."

"Well, whatever it is please take him and introduce him to the great outdoors." After I took this picture Tony used two tablespoons to scoop him/her up, before setting him free on our front porch. And I am not sure if it or I was the most scared. 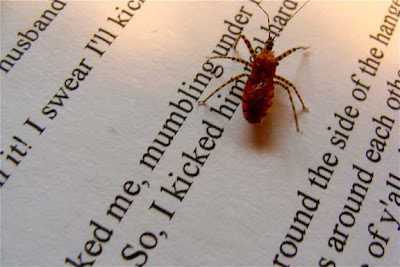 As I was trying to calm myself, the phone rang—it was Kinky. He wanted to know if we wanted to meet him in Kerrville to eat lunch together.

Around 1:00, we were sitting across a table talking to Kinky and his and our friend Bob about what we were going to order. When Tony, the friendly waiter, walked up to take our orders I said, "I think I'll try this one, but I don't know how to pronounce it.

Tony smiled, Kinky smiled, Bob smiled and Tony smiled at me. Then their Tony told me the Spanish name for it and then he said in English, "It's what you would call the Surf and Turf." Then everyone gave him their order.

The four of us talked about books. Then Bob told us some hilarious stories about his travels to Nicaragua, Cuba, Mexico and Belize. Then lunch was served. Kink's Mexican plate looked tasty, Bob's tortilla soup looked delicious and Tony's Burrito plate looked yummy, too. Then Tony put my Surf & Turf plate down in front of me and the men's eyes got real big. "I wish I had ordered that," they took turns telling me, as I sank my dentures into a delicious shrimp, covered in melted queso and covered with pico de gallo. (Carol, in Spanish, queso means cheese dip. LOL, I got you!)   : )

After a fun lunch we adios-ed each other and went our separate ways. Our way, was to Office Max, so I could pick up some office supplies. Then Tony drove Trigger across the street, so we could go to J. C. Penneys, so I could buy something nice to wear for my first book (novella) signing of, The Cowgirl Sisterhood: The Membership Drive, Part I. Then we came home.

When we walked inside of The Cabin, the phone rang—it was Kinky. He wanted to know if he could come over and have a picnic with Toto, because Toto is so old and his health is rapidly going downhill.

Five minutes later, Kinky was inside our trailer, hand-feeding Toto small pieces of meat and tossing big pieces of meat into the air for Roy to catch. All-in-all Toto and Roy enjoyed their picnic with Kinky and so did we. And not to brag about my Roy, (Yes, I know I am bragging about my four-legged-soul mate.) he caught every piece of meat in the air. He is such a cool dog.

A few minutes ago, while I was writing this, Jerry of Jerry & Patsy, the nice couple who adopted Jethro Tull from us last Saturday called, so Tony took the call. When Tony said, "Well, thank you so much for calling. Goodbye," I stopped writing and turned around. "Jerry, just told me that they love Jethro and Jethro loves them, especially his new forever home..." Hearing that good news has made my day great.

As I finish writing this, so I can get back to writing my novella, I want to show you the picture that I took last Monday of the Medina Community Library's window display that they put together for my book signing this coming Saturday from 10:30 to noon. I think it is an awesome display and I think that the "Best Little Library In Texas" is even more awesome. I hope many of you can come to it, so you can purchase a book or see what I purchased at JCP today. 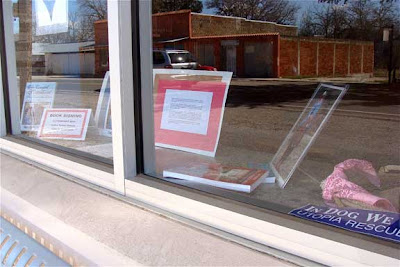 P.S. My dear friend Mari just sent me this and it is without a doubt the greatest dogs dancing that I have ever seen. Please check it out. It made me tear up. It's titled, Glenn Miller Routine— Hooked On Swing. You'll thank me for posting it when you watch it.
Posted by cousin nancy at 6:37 PM