Today has been great, but yesterday was even better for several reasons. After Brandon, Rick, Tony and I ate lunch I asked Brandon to take a break, so he and I could mess around with my Garage Band software and record him playing and singing some of the awesome songs that he has written.

In minutes, Brandon was sitting at the kitchen table, adjusting the settings on my Yeti microphone, that I purchased a few years ago, so I could make my second book an audio book. But I ended up scraping that idea, because Ben and Tony kept making me laughing, etc., but mainly because of my thick North Texas accent, which made me sound like a country hick.

After I showed Brandon how to record himself, he filled The Cabin with beautiful music. While he recorded one song after another two very nice women showed up, because they wanted to meet us and see our rescue ranch. Tony and I really liked Patti and Laura and because they had driven all of the way from Killeen, Texas we gave them the grand tour. Then the four of us went into Outer Space and had a really fun visit.

Around 2:30 after they had left, Rick and Tony took off in Trigger to get groceries at the H-E-B on Highway 16, while Brandon continued to record and figured out how to use special sound effects to improve the quality of his recordings.

When Rick and Tony arrived back at the ranch they put up the groceries, because Brandon and I were busy burning his songs to a CD for him. While I was syncing my iPod with Brandon's songs, so we could play them for Karon and Dalton, Tony showed Rick how to make bacon-wrapped bananas, because we had invited Karon and her son Dalton to come over for a visit and appetizers, before taking Brandon back home.

When Rick and Tony went outside to heat up our new Char-Broil Tru-infared grill, Stacie and her eight-year-old son, also named Brandon, arrived to officially adopt Molly Brown. After Stacie filled out The Unsinkable Molly Brown's adoption form Tone and I jumped into Kermit and they followed us in their big truck, down to Molly's and Rocky's pen.

When Molly saw little Brandon jump out of their truck, she knew that she was getting adopted and she could not quit wagging her tail and jumping up and down, which made it difficult for Tony to put a leash on her. When she came out of her pen she pulled Tony to Brandon and began kissing Brandon. I took these two pictures of Brandon with his new best friend, as Karon and Dalton pulled up. 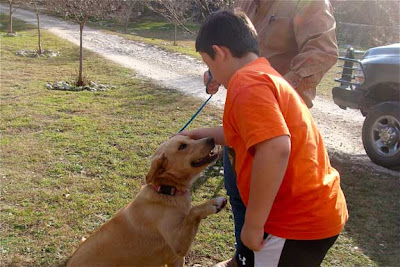 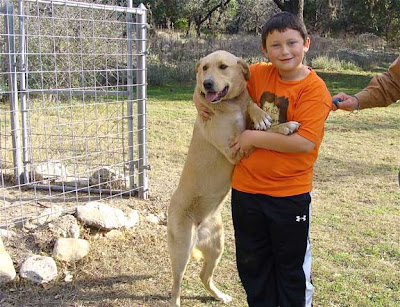 After we had adios-ed Stacie, her sweet, happy little boy and Molly, one super lucky dog, we drove back to The Okay Corral, so Tony could cook the bacon-wrapped bananas, which Rick was already hesitant about tasting.

While everyone sat around waiting for the delicious treats to finish cooking, I went up to The Cabin, grabbed my iPod and the portable Bose docking system and returned to The Okay Corral, so everyone could listen to Brandon's very first recorded music and they loved it. And Rick loved, "Tony's Bacon-Wrapped Bananas," my recipe that Tone stole from me, that I stole from my girlfriend's father, forty-seven-years ago, when I was in the eighth grade.

As our friends enjoyed eating the appetizers we tried to come up with a perfect name for the adorable little pup, because I decided Babe Ruth wasn't such a good name after all. Rick suggested, Patches. Dalton and Brandon came up with several funny names, but as of today he still hasn't been officially named, because I want his name to be very special, because he is such a special little puppy.

As I finish typing this, this adorable, little one-eyed Beagle/Heeler pup is sleeping in his crate, about one foot away from me, probably dreaming about the day when we will finally remove his Victorian collar, that he has to wear to protect his healing eyelid.

If any of y'all know of some super dog-loving friend that might want to adopt him please tell them to call me. He is thirteen-weeks-old, neutered, wormed and has had his1st puppy shots and rabies shot and  he is very smart, because we have already house-trained him.

Rick left early this morning after he and Tony returned from drinking coffee at The Old Timer, in Medina. Around noon today, my throat started feeling sore and scratchy and now I am coughing regularly, so I guess I caught whatever 3-4 day coughing deal that Tony has just gotten over and what Rick had when he arrived here on Friday. Fortunately, neither one of them never had fever or felt bad, except for a nagging cough. So, at least I know it is not the dreaded flu.

And that is about it for today, except for one more time wishing our dear friend Fourth Coates a happy birthday.

Y'all have a great evening!
Posted by cousin nancy at 4:07 PM