Today has been great and it started really early. At 5:39 this morning the phone rang and Tony took the call, because Mama, Roy and I were snoring loudly in the bedroom. He was a milk man delivering milk to a school, in North Texas and O'Henry had wandered up. (We adopted out O'Henry, a handsome German Shorthair on November 8, 2011.)

When gave Tony his Utopia Animal Rescue Ranch tag number to Tony, he called the owners and found out the woman was in the hospital recovering from major surgery. Anyway, long story short and sweet—she's doing fine and O'Henry is back home.

This morning at 7:45, I called Harley Belew, at the radio station, so I could do my weekly Utopia segment on The Harley Show. It was a lot of fun and Betty Rubble was Harley's Pet of the Week.

After having breakfast with Tony, he went outside to do our chores, because I had to go to the Medina Community Library aka "The Best Little Library In Texas," to bring Mary Ellen some props for them to display to help advertise my very first book signing for my new novella, The Cowgirl Sisterhood: The Membership Drive, Part I, scheduled for Saturday morning, February 23rd from 10:30 - 12:00.

When I got back home Carlton had two messages for me. One from Kinky and the other from our friend Marguerite, who adopted Enzo from us a few years ago. I called Marguerite first. She told me that when she had read my blog about the adorable one-eyed, thirteen-weeks-old, Heeler/Beagle puppy. And that she could not quit thinking about him. She had even dreamed about him and last night when she dreamed about trying to help a little one-eyed boy—she knew she had to adopt our puppy.

"Last night Tony named the precious pup, Clyde. I told him that it was fine, but his official name would be Clyde Kadiddlehopper, which of course dates me back to The Red Skelton Show..." When Marguerite and I adios-ed each other around 12:00, I said, "Tony, we're meeting Marguerite, at Hoegemeyer Animal Clinic, in forty-five minutes, because she wants to adopt Clyde!" And fifteen minutes later we took off in Buttermilk with our/her precious cargo.

When we arrived five minutes late at Hoegemeyer's, Marguerite was inside the lobby visiting with Susan. When Tony handed Clyde to his new best friend, Clyde began wagging his tail wildly, while licking and kissing her face, so I snapped this picture of them, because I don't know who was more happier, Marguerite, Clyde, Susan or us. 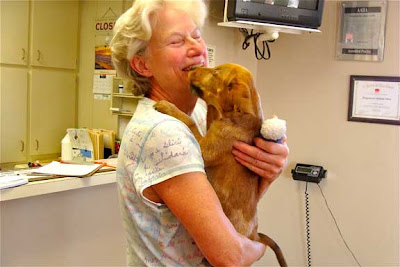 After Marguerite had signed off on Clyde's adoption papers and told Susan, "His new name is Odi," we adios-ed Susan and Marguerite and went to eat lunch at our favorite BBQ place, Cal-Bob's Smoke Shack, on the other side of I-10.

When we walked inside Carol and Calvin's popular Smoke Shack, that has been rated in this months Texas Monthly magazine as having the best BBQ in the Hill Country and Read about Cal Bob's Smoke Shack on Trip Advisor
Trip Advisor rated Cal Bob's-#3 Out Of 18,000 plus Restaurants in Texas it was packed with happy diners and fortunately for us there was one empty table for us to take. When Carol saw us she came running out of the kitchen to greet us with hugs.

As always our lunch was absolutely delicious and fun, because we got to meet their friend Tucker, who  just moved to Kerrville, three months ago, from Alaska and we had a great visit with Carol.

When we got back to the ranch I called Kinky and told him the great news about Clyde aka Odi getting adopted and Kinky was as thrilled as we were about it. When I told him that I was fixin' to head to Medina, to drop off a few more things at the library, he said, "Great. Can you mail a letter for me?"

Ten minutes later when Tony and I went over to the Lodge, I walked inside the kitchen and saw his letter that he wanted me to mail and because I could hear Kinky talking on the phone, in his office, I grabbed the letter and left.

Right after I dropped his letter in the mailbox I thought, "Oh my goodness. I hope that was the letter he wanted to be mailed." Then we went to the library and delivered more props, including an old pair of my pink Justin Gypsy cowgirl boots and one of my roping ropes, for my upcoming book signing and then we had a nice visit with Mary Ellen, the library Director.

When we got back home I punched in Kink's phone number. "Kinky, I just mailed that letter that was sitting on your kitchen table. I hope it was the letter you wanted me to mail for you?" Kinky chuckled.

"Yes, you mailed the right letter and thank you..." And that is about it for tonight. No wait. I just heard a splash behind me and turned around and saw a small mouse trying not to drown in our dog's big water bowl. "Tony! Help!" I nearly yelled. "Come quick!"

Tony came running down the hall as I told him about the helpless, little mouse that must have fallen off of our breakfast bar into the water bowl. "Why don't you carry the water bowl outside and pour him out?" I suggested. So, Tony picked up the water bowl with the little mouse dog paddling in the water. Then I opened our front door so Tony could go outside to save his or her life.

When Tone came back inside with the emptied water bowl I thanked him and said, "That's the first mouse dropping we've ever had." And now I can truly say, "And that's about it for tonight. I hope."

Y'all have a great evening!
Posted by cousin nancy at 7:11 PM

That is Love! So happy for Odi and his new Mom, love the smile!
Fay

Hi Fay! Odi is one lucky puppy to live with Marguerite. We are so happy they found each other.