Today has been more than great. When I did the Harley Show this morning I had so much fun. Before I told Harley who his Pet Of The Week was I said, "Harley, can I wish David Villanueva a Happy Birthday today?"

"No," Harley said, and then we both started laughing.

"I'm teasing you, Cousin Nancy. Of course you can wish him a happy birthday. Who is David Villanueva?"

"He's the lucky husband, of my good friend, Mari."

"Well then let's do it right," Harley said, and then in the background, Elvis started singing Happy Birthday. It was hilarious and it took me a little while to quit laughing. Then I told Harley that Daisy was his Pet Of The Week.

"Daisy's about three years old and is as sweet as she can be. She's great with other dogs, not hyper, not a digger or a climber..." 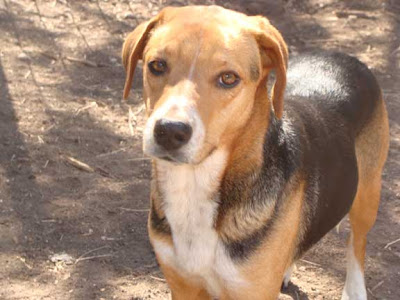 After breakfast, when Tony went outside to do his chores, I started cleaning the trailer, because my good friend Gerri, an extremely talented photographer, was coming over between ten-thirty and eleven—to "pick my brain." Which made me laugh, because like I told her, "We're talkin' slim pickings."
As I pushed Hazel aka Purple Haze around the big room—the phone rang. Instead of letting Carlton take a message I answered the phone. "Rescue Ranch. Can I help you?"
"Ma'am, I am desperate and I hope that you can help me," A man said, sounding like he was starting to cry. "I live in San Antonio and on my way to work this morning I found a mama dog and her puppy on the corner of a busy intersection. I rescued them and put them inside my truck and I don't know what to do. I can't keep them and I have called every shelter in San Antonio and none of them will take these dogs..." And it broke my heart.
Knowing full well that we were at capacity out here and had no space available, I went ahead and told the kind-hearted man, that we could take the dogs, because today Boyd, from Fort Worth, who wanted to possibly adopt two of our dogs, had made an appointment to come out today. After the man thanked me, I gave him directions to our rescue ranch and then I went outside to tell T. about the mama dog and her pup coming in, in a few hours.
As soon as I got back to the trailer—Gerri arrived with her friend and good neighbor, Cindy—to pick my brain. After howdies and hugs the pickin' and the grinnin' commenced and I had the best time with them. I'm not real sure if I really helped Gerri any, like she said I did, but I had a blast visiting with her and Cindy.
Mama Dog and Pup arrived, as Gerri and Cindy were driving off, as I was walking down to the puppy pen to greet the sweet couple, that had rescued the dogs. When I arrived, Gerri was holding Pup in her arms and kissing her, while visiting with the man's sweet wife, while Tone and the gentleman were putting Mama Dog into the puppy pen.
After introductions to the caring wife, Cindy, Gerri and I took turns cuddling the cute, little fat puppy in our arms, as we visited with the nice woman. After Gerri and Cindy drove away, Tony put the puppy into the puppy pen to be with her mother and she immediately started nursing on her mama, as Mama Dog, whose ribs were showing, ate all of the dog food that Tone had put into her pan. "She's starved down now, but don't worry, I will get the weight back on her quickly," Tony promised the kind couple. After the couple thanked us and gave us a donation to help with the vet bills they drove away.
Forty minutes later, right after we finished lunch, Boyd, from Fort Worth, arrived and we really liked him from the get-go. After giving Boyd a tour and introducing him to all of our dogs and telling him all about them, he started narrowing it down. And by four o'clock he signed off on Lucy and her roommate, Ashley Judd's adoption forms! Tony and I were so thrilled for them for finally finding their forever home together. They are going to live in Cowtown with Boyd, his Aunt Alice and his 101 year old grandmother! Here are a few pictures of Boyd with Lucy, Ashley and Lucy sitting in the front seat of his car waiting to go home. 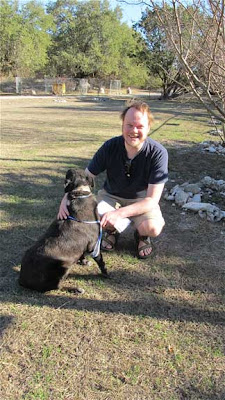 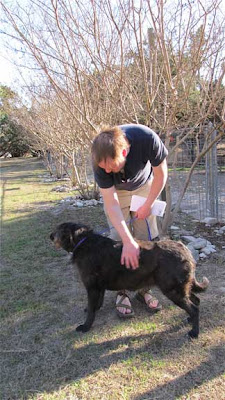 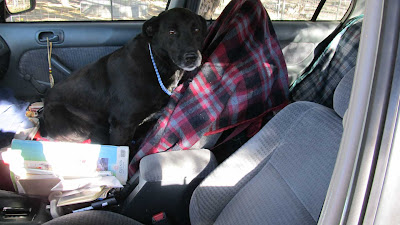 Early this evening Tony and I went outside to take pictures of Mama Dog and Pup. We plan to name them tomorrow before we take them to Hoegemeyer's to get their shots and examinations. I can't wait for Kinky to meet them. They are so beautiful and little do they know that their lives are fixin' to become the best. 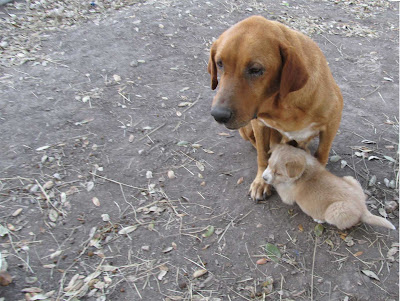 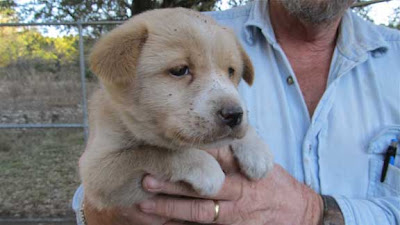 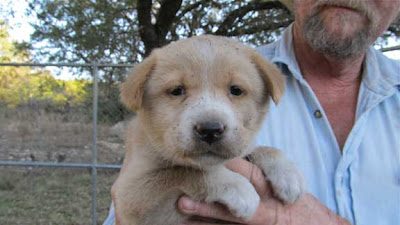 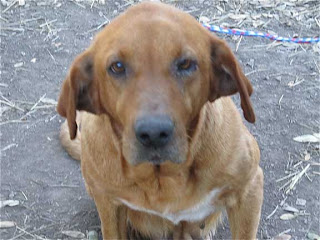 Y'all have a great evening! And may the dog of your choice bless you! Happy Birthday, David
Posted by cousin nancy at 8:47 PM