Today was great even though this morning I tried to do the dance / workout video and I couldn't quit laughing at myself for being so uncoordinated. When Ben and Tony came inside the trailer, after doing their outside chores, I told them about trying to dance with the stars and they couldn't quit laughing, as I showed them some of my new moves that I could not do.


An hour later, when Ben was teaching me some stuff on my computer, our great volunteer aka dog whisperer, came out to work with Annie Oakley and I am proud to report that Sharon Griswold of "Rover Misbehaving?" is a miracle worker. Annie is turning into a social butterfly, with the best of manners. Thank you, Sharon!


Around one o'clock Dr. Leifeste came out to trim the hooves on our six pigs and Ben and Tony helped him. When they only had two more pigs to go I went outside and took these two pictures of them and then I went into the pigpen to help Ben round up Little Ricky for his manicure. 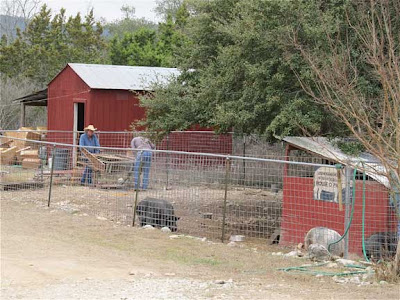 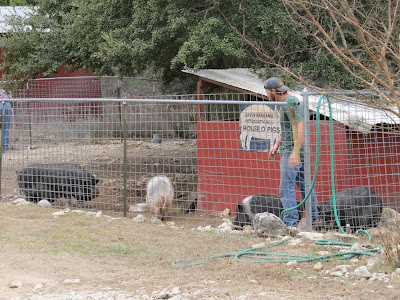 Fortunately for me, Ben didn't need my help getting Little Ricky into the chute, but he did when it was  Laverne's turn, because we couldn't catch her, as she wildly ran all around the pigpen. Then I had a brilliant idea on how we could catch her and I took off for the trailer to get a blanket.
When I returned, I told Ben, as I rolled up the blanket, "I think if we can get this blanket under her belly, we can use it like a sling and can carry her over to the chute..." And the minute I tried to put the blanket under her—she took off running and that is when, totally by accident, I turned into the" First Woman Pig Matador!"
Because we were chasing Laverne and trying to steer her towards the catch pen, the rolled up blanket that I was holding in my arms—unrolled and magically turned itself into a heavy cape, sort of like the kind matadors use and I started controlling her with it, as Ben helped push her behind towards the gate. "Look Ben! It's working! I bet that I am the first woman pig matador in the universe! Come take this cape and I'll stay behind her and push her." Ben started laughing.
"No, Nance," Ben said. "Keep moving her—we're almost there." I did as Ben said, but I didn't want to be the pig matador anymore, because I was scared that I might slip on a rock and fall and then be squished to death, by a sweet, big, fat pig named, Laverne.
As we slowly guided her towards the gate, I started laughing, because I started visualizing my funeral. "We're so sorry, Tony. How did Cousin Nancy die?" And T., Kinky and Ben, would try not to laugh, and then take turns saying something like this: "A pig-in-a-blanket sat on her and it flattened her like a pancake. She was paper thin, like she's always wanted to be. It's going to be closed-casket, of course, and..."
"We got her, Nance," Ben said, as I suddenly came back to reality and he closed the gate behind Laverne. "Thanks, Nance, I can take it from here." I was so proud of myself for helping Ben, I strutted all of the way back to the trailer.
This afternoon we went to Kerrville to get supplies at H-E-B. and to pick up some flowers that we wanted to give to Sandy Wolfmueller for her birthday today. 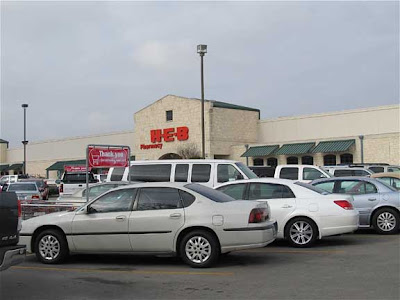 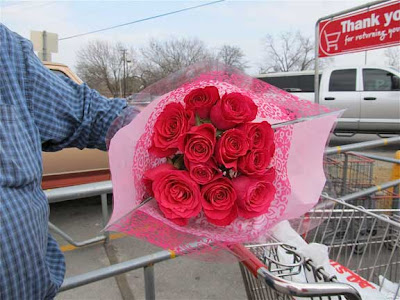 After we parked Trigger I took this picture of Tony and me standing in front of Wolfmuellers Bookstore, before we went inside, to give Sandy her bouquet of roses and wish her a happy birthday. 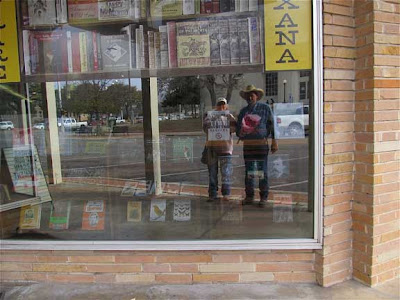 Sandy told us that she loved the flowers and this is a picture I took of her with her roses. 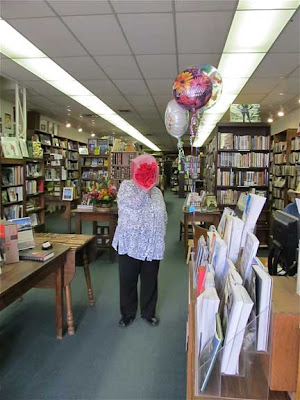 Y'all have a great evening!
Posted by cousin nancy at 9:24 PM