Happy Thanksgiving! Today has been great and I have so much to be thankful for. My morning started out great and then it went South real quick.

This morning at twelve minutes past four o'clock I was on the phone with Kinky wishing him a happy Thanksgiving. Yesterday at lunch, he had asked us to please give him a four o'clock wake up call and I overslept by twelve minutes, but he didn't seem to mind. I bet that I was the first person to wish him a happy turkey day today.

After making some coffee, I started a load of laundry, fed the dogs and then I did a little paperwork as the caffeine began to kick-in. "Tony, today is going to be fun and I can't wait to cook dinner for our dogs. I'm fixin' to cook breakfast in just a minute."

"Good, because I'm starving." This morning was fun, because Tony stayed home, instead of going to the Old Timer in Medina to drink coffee with his friends, because the Old Timer was closed today. By six-fifteen we had eaten breakfast and I was finishing up washing the dishes. "Nance, we need to leave here by seven-fifteen to go feed the pigs at Heath's."

"About fifteen miles away." At seven-fifteen Tony and I jumped into Buttermilk to go feed the pigs. T. cranked the engine and then Buttermilk died, again. "What's wrong?" I asked. Tony shook his head sideways and then he got out and popped her hood, looked inside and then slammed the hood down.

"Her fan belt flew off. Let's go in Trigger." I sighed and then got out of Buttermilk and climbed up into Trigger and we took off in silence. Five miles down the road I said, "Can she be fixed?"

"Good. I'm so glad that Marvin is coming out to help us feed the dogs their dinner. It will be fun. What time is he coming?"

"He told me that he will be at the rescue ranch at ten o'clock." As we drove through Medina there was not one car on the road. Every business was closed and the town looked deserted. Fifteen minutes later we pulled up to the pig barn on Heath's ranch. "Come on in, I need for you to help me call out each pig's special diet recipe."

After I greeted the pretty pigs T. showed me the individual recipes for the pigs posted on each pigpen. "We'll do one pig at a time. Just call out the recipe to me while I mix it up over on the table. Start here."

"Protein, milk, oats and grain." Fifteen minutes later we were done and the pigs were enjoying their breakfasts. Then we left the pig barn and went into the goat and sheep barn, so Tony could feed them, too. They were so cute. And I laughed out loud when a couple of goats butted Tone as they excitedly followed him outside to fill their feed troughs.

"What time is it?" I asked, as we walked towards Trigger.

"Nearly eight-thirty," Tony said, as he turned Trigger's ignition key and I fastened my seat belt. Then nothing happened. I looked over at T. and then he turned the ignition key, again and nothing happened, again. Then Tony mumbled a few cuss words and then he got out of Trigger and the next thing you know he was underneathe the truck banging on something. "Try starting it," he half-hollered.

I scooted over, turned the key and nothing happened. Tony banged some more and then hollered, "Do it again!" Twenty minutes later after banging on the battery cables and the starter thing and doing it again we gave up—Trigger was dead, too!

Trying to stay cool and not get mad, because that was not going to help our situation, I suggested that we make some funeral arrangements and then call Robert and Sherry Selement, our good friends and next door neighbors. Tony pulled out his cell phone to discover there was no cell service on Heath's ranch, so we decided to start walking.

About a quarter-of-a-mile later Tony checked his cell phone and got service. He quickly punched in Robert and Sherry's phone number. "Hello, Sherry. We're over at Heath's ranch and our truck broke down." There was silence a moment of silence. "Okay, thanks. Bye. Sherry said she will come and get us." We turned around and started marching back up the road to Heath's ranch as a neighbor watched us suspiciously from his barn.

When we got back to Trigger, Tony banged on him some more and I did it again and again, but to no avail. "I think it is the starter and not the battery. We decided to lock Trigger up and leave him parked at Heath's ranch until tomorrow. Forty minutes later we heard a car headed in our direction, then we saw Robert's white truck! We waved!

When Robert drove up he had two smiling passengers with him: his son Gregory and Tito. After greetings and thanking them for coming to our rescue, we climbed up into the back seat of Robert's mega-sized, white truck and took off for home. "I like your truck, Robert. What kind is it?"

Well, I guess that you could say that this is our country version of "Trains, Planes & Automobiles," but ours should be called "Ford, Ford & Chevy!" We had a fun visit with Tito, Gregory and Robert and we cannot thank them enough for interrupting their Thanksgiving Day plans and rescuing us.

When we walked inside the trailer it was ten minutes to ten—we were running late, so T. jumped in Kermit to get the dog's holiday dinner groceries from the barn, while I pulled pans out and turned on the oven to help speed things up. By the time Marvin arrived the vegetables were cooking in the oven and in Connie Strong's stock pot on top of the oven.

In no time flat or by ten thirty-eight, the three of us went outside to treat our dogs to their warm Thanksgiving Dinner and our dogs loved it and they all got second servings. After we cleaned our buckets and wooden spoons we had a fun visit with Marvin. And before he left to go home I loaned him my book by Doug Fine—Farewell, My Subaru. Here is a picture that Tony took of me feeding second servings. 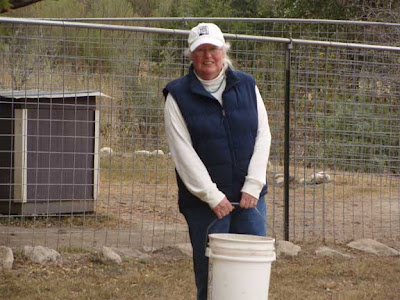 Two hours later as T. and I ate our Thanksgiving dinner I said, "I've just come up for a title for tonight's blog. You know Kinky wrote the book The Christmas Pig, well, I am going to title tonight's blog, "The Thanksgiving Pigs! I can't wait to tell him about today's escapades."

This evening a little after five o'clock I heated up the dinner rolls that we had bought for our dogs holiday dinner and after they were heated, we went outside and gave one warm roll to every dog and they loved them and ate them up. 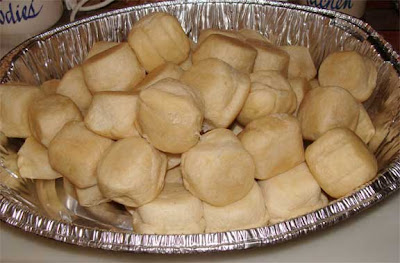 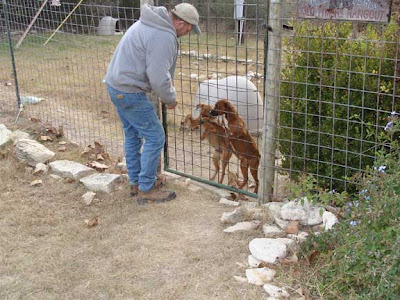 I hope that all of y'all had a wonderful Thanksgiving, because we sure did. I am so grateful and thankful and want to thank Connie Strong for buying us the stock pot, wooden spoons, dish towel and pot holders, to use for our dog's holiday dinners, Marvin for volunteering and helping us out today and Robert & Sherry and Gregory and Tito for going beyond the call of duty as good neighbors and rescuing us and our holiday! And lastly, I want to thank Fay MacLachlan, up in Canada, for underwriting our dog's annual Thanksgiving Dinner. And, Rick and Leisa, I am sorry that y'all couldn't make it. We love y'all!
P.S. Tonight I am going to watch "Planes, Trains & Automobiles" which is one of my favorite movies of all times. I love the story and I love Steve Martin and John Candy. I am going to be thankful as I watch the icy pickup truck scene, that Robert didn't make us ride outside in the the back of his big, white Chevy pickup. Maybe, I should have titled tonight's blog, "The Chevy Man Cometh!
Y'all have a great evening!
Posted by cousin nancy at 8:20 PM