Today has turned out great, even though this morning when I woke up I was feeling a little depressed, so I didn't walk.


This morning as I tried to do some paperwork, I kept thinking about two, sweet, little terrier dogs that a volunteer at the Kerrville pound, had called me about a few days ago. Brooke had told me that their time was up and they were going to be euthanized today and that is enough to depress anybody.
Even though I knew that we are at capacity out here, I couldn't quit thinking about those two little dogs. Around ten o'clock while Tony was outside doing his chores, I picked up the phone and called the Kerr County Animal Control and Nicole answered the phone. After talking to her for five minutes about the terriers I went outside.
"Good morning, Marvin," I said, as our good friend / volunteer was cleaning Hank's and Lois Lane's big pen, near our trailer. "Thank you, for coming out to help Tony. Guess what I'm fixin' to do?"
"What?"
"Go to Kerrville and rescue two little terrier mixes from the pound. They were scheduled to be euthanized today," I said, wearing a big grin on my face, which caused Marvin to grin, too. "I need to go tell Tony and get him to help me put a crate into Buttermilk, so I can take off for Kerrville."
Forty-five minutes later, Nicole greeted me as I walked into the office. "Nancy, thank you so much for taking the terriers. I'll be right with you after I take care of these two people." As I stood in the office with two lavender colored leashes in my hand, I watched a nice man, in his late thirties, write a check to get his dog out of jail—for getting out of their fenced yard. Then a volunteer appeared with his big chocolate Lab that was more-than-happy-to-see her owner and high-tail it out of there.
After they left the pound, a woman wrote another check, so she could adopt a cute Lab-mix puppy. And then there was a prison break, so to speak. A big, black Lab probably about one year old came flying into the office off leash and he was headed for the front door to escape. Then the volunteer came running into the office area and she and Nicole tried to catch the happy dog and that is when I came to their rescue.
"Here, let me get a leash on him," I said. In seconds the beautiful, gigantic, sweet dog was wearing a pretty Utopia Animal Rescue Ranch, lavender colored leash around his neck and he didn't seem to mind as he kissed the volunteer and happily went back to his cell.
After the woman left with her sweet puppy, I handed the volunteer the other leash and she disappeared. Seconds later the two terriers were in the office and my jaw dropped when I saw them, but I didn't say anything. As the two happy dogs danced around the office I signed off on their paperwork. "Y'all, have a great Thanksgiving," I said, as I walked out of the office with a volunteer, to help me load the two beautiful looking dogs.
The two young dogs yapped with excitement as we drove away—headed for Hoegemeyer's Animal Clinic, so I could pick up some more pills for Thunder. Because of timing and it being a holiday weekend Hoegemeyer's was full with boarders, so I told Dr. Craig's sweet wife aka receptionist that we would bring the dogs in on Monday for shots, spaying and neutering. "What did you name the cute terriers?" Kathy asked, as she handed me a plastic bottle with another one week supply of Previcox for Thunder. I laughed.
"Pumpkin and Pilgrim," I said. "They are precious, but not terriers. They look more like miniature coon hounds with Dachshund heads." Kathy burst out laughing and she was still laughing as I exited the veterinary clinic.
When we arrived at the ranch the first thing Tone said when he saw them was, "Nance, these aren't terriers. They're cute, but no way terriers." After we put the two happy, playful pups in the front yard of my writing cabin we played with them and then T. fed them. Then they saw the pigs next door! It was hilarious. Pumpkin's hair went up on her back, while Pilgrim barked at them. The pigs did nothing.
When we came inside the trailer the phone rang—it was Kinky. After I told him about rescuing Pumpkin and Pilgrim he asked us to join him and his sister for lunch in town. "No way, Kinky. I just got back from Kerrville and am too tired. Two minutes later, I changed my mind, because I didn't feel like fixin' lunch.
Thirty minutes later we walked into the restaurant and placed our order and then Marcie and Kinky arrived. We had a fun lunch.
When we came home Tony and I went outside to play with Pumpkin and Pilgrim and to let me take pictures of them. Then I took a short video clip of Pumpkin & Pilgrim playing in the yard. Pumpkin is the red and white dog and Pilgrim is the one with tan and black hair. 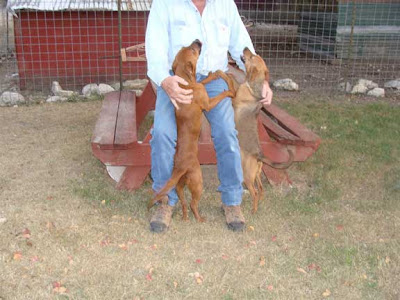 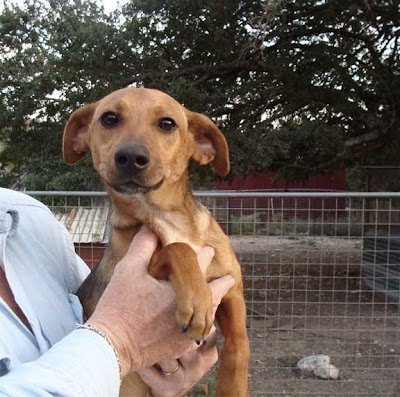 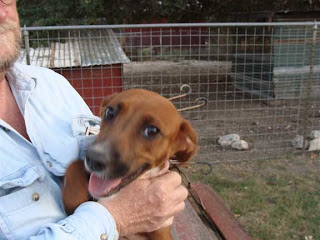 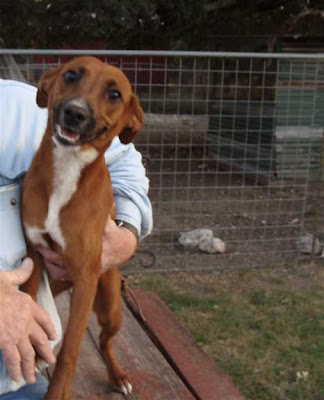 Pumpkin #2
Aren't they adorable! Before leaving their pen I took this picture of some birds nearby hanging out. 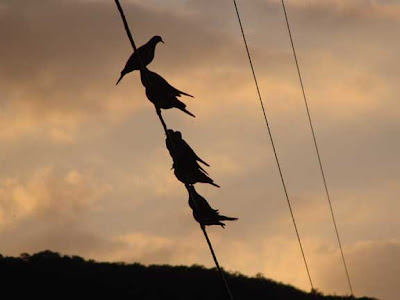 Well, tomorrow is the big day, so I need to go to bed early. I can't wait to get up and cook our dog's Thanksgiving Dinner tomorrow morning with T. and Marvin is going to help us! I want to wish everyone a Happy Thanksgiving!
Y'all have a great evening!
Posted by cousin nancy at 8:09 PM