Today has been a great day and a lot of fun! After taking the photo of Jaws and Nemo—I returned Nemo back to the Lodge. Just as I was fixin’ to leave—Roy and Jo Nell G., from Utopia, arrived with Kinky’s cord of wood! As the four of us unloaded the wood from their trailer, we had a great visit with them. When their trailer was empty—they left, and then I left.

Today, Tony and I met some very nice people. While Paul was out here, a very nice retired couple from Canada, showed up on their bicycles. They are ‘snow birds,’ staying over at Koyote Ranch, for a few weeks, before heading further south. I liked them on the spot, and gave them a tour of the Space Ship, because they were staying in their RV. We had just started visiting, inside the Space Ship, with these nice people, when a van showed up. I ejected myself from the Space Ship, and went over to greet the people in the van. “Hi! I’m Cousin Nancy. Welcome to the rescue ranch!” Then this very nice woman came around the side of the van. “Hi Sasha! I’m glad that y’all made it!”

Sasha, who I had met at the Kinky Ranch Roundup, along with her friend Rebecca, had called me earlier this week, to ask if she and Rebecca could come down with some friends to volunteer today.

After Ken and Jack introduced themselves, I asked everyone to join Tony and Paul, and the two Canadians over by the Space Ship. (I wish that I could remember those two Canadian names, but a lot was going on.) After introductions, Tony and Paul left to go deliver some cat food, that Paul had delivered to us, for our neighbor down the road, who takes care of sixty cats—that were all dumped on her.

I then invited everyone to go into Outer Space for a short visit, and I really enjoyed it, but not as much as Thunder, Little Girl, Hank and Toto did! Sasha and her friends had come from Austin— with dog treats, and they generously handed them out, while all of us petted our old dogs. Conversations were flowing back and forth, and it felt like a family reunion. I loved these people, but not as much as my dogs did.

“Cousin Nancy,” Sasha said. “We came down here to volunteer. What do you want us to do? We will do anything.”

“Visit with our dogs, hand out treats, and take them for walks.”

I then invited everyone inside for a quick tour of our trailer, and to let them meet Lucky, our famous three-legged cat. Since I hadn’t dusted or vacuumed today, or in other words, the trailer was a mess, no cameras were allowed, which was fine, because no one wanted to take any pictures—thank goodness!

When we went out to the front porch, I realized that my two new Canadian friends were gone! I know that they will come back, because earlier, they had asked if it would be okay for them to come out, to volunteer, and walk our dogs, while staying in the Hill Country.

First, I gave everyyone a tour of the ranch and our dogs, and then Tony showed up, and helped me finish the last half of the meet and greet tour. When we were done, Tony went to the barn and grabbed four leashes. They picked out which dogs they wanted to walk first, and Tony leashed them up, and the dog walking commenced!

Jack and Sasha had just returned with Nash, and were visiting with Tony and me, while petting Nash non-stop, when they asked if they could take Muffy and Max for a walk. Tony went to M & M’s pen, put leashes on them, and then he handed off the leashes to Sasha and Jack, and they took off, and so did I.

Buttermilk and I went to get our mail on Hwy. 16. We then went over to the Lodge to drop off Kinky’s mail, and when I returned Muffy and Max were back in their pen, and Tony was sitting in Kermit—visiting with Sasha and Jack.

When I drove up to Kermit, they were all laughing! Jack told me that once they had left the rescue ranch, Max had eaten his leash in half and had run off—straight back into Tony’s arms! We visited for a short while, until Ken and Rebecca returned Lucy and Ashley Judd to their pen. Unfortunately, it was now time for them to leave, so they could get back to Austin.

Before leaving, Rebecca made a donation, and the others bought four calendars! The four promised to come back with more of their friends! I hope that they keep their promise, because our dogs loved them, and Tony and I now count them as friends.

Here is a picture that T. took of us, before they left for Austin. From left to right:
Jack, Ken, Rebecca, Me and Sasha! 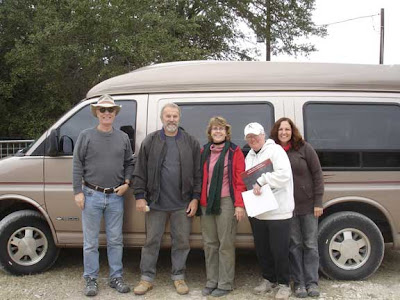 I think the Canadians were Don and Susan. I hope y'all have a great evening!
Posted by cousin nancy at 6:59 PM