Early Sunday evening, around five-thirty, just before dark, before Kinky had returned to the ranch, from Washington D.C.—we had an incredibly great dog adoption! I couldn’t believe that...

Then as they were leaving the rescue ranch, Betty ran up, looked B. in the eyes, again. “I’m going to adopt you, but not today, Betty White,” B. said. “I’ll be back—I promise, you.”

Later that week, Deborah Hanson, who had put on the event—shot me an e-mail that she had received an e-mail from B. B. wanted to know Betty White’s story. So, I called B. and told her, “Betty White came to our rescue ranch on January 6, 2006. She had belonged to a woman, in Utopia, who could no longer keep her. The woman had a white Boxer, who had come into heat, and a mysterious black dog, had gotten her Boxer pregnant. Betty White is a Virgo, born on September 11, 2005, and she is one of the sweetest dogs that we have ever had. Betty White would make a great agility dog for someone, because she is high energy, and highly intelligent! She’s one fantastic dog! I love her!” Here is a picture of her when she arrived at four months. 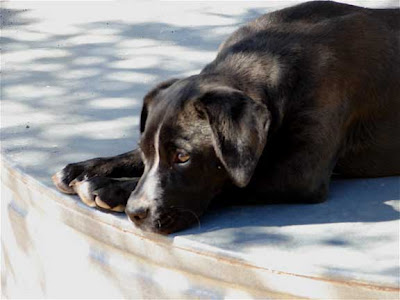 B. was impressed, and told me that she definitely wanted to adopt B.W. and would try to come out on Monday to adopt her. As soon as our phone conversation ended, I went outside to tell B.W. that she was getting adopted on Monday—and I knew that she knew, exactly what I was telling her!

Well, I lied to B.W., but not on purpose. B. ended up calling me late Sunday afternoon, and asked if she could drive out and adopt B.W. now. Of course, my answer was, “Yes! We’ll have the gate open! Drive carefully.”

After we said our goodbyes, I went outside to tell Betty her goodbye news, but Betty already seemed to know that today was her day! Her stub of a tail, was wagging her whole backend—she was ready to leave Utopia forever, and couldn’t wait to go to her forever home! Then I came back to the trailer, to prepare B.W.’s adoption contract.

Around five fifteen, the dogs cranked up outside—B. was driving in! Tony and I went outside and greeted B. and her friend, who we will call B.-2. B. and B.-2 and us visited for about fifteen minutes, and then B. filled out our adoption form. “Well, let’s go get Betty White!” I said.

“No, not yet,” B. said. “I have a favor to ask. Would you please sign my two 2009 Utopia calendars and your book, for me? I bought them at the Kinky Ranch Roundup event. And I love your book, and your blog is great, too!”

“I was so honored, and said, “Yes, I would love to sign them.” B. pulled out a pen and I signed the two calendars and wrote inside her book—For B., Thank you for adopting Betty White!

After handing B. back her pen, Tony and I jumped into Kermit, and asked the two B.’s to please follow us down to B.W.’s pen.

When T. and I pulled up to the pen, Betty was shaking with happiness, but when B. & B.-2 pulled up, B.W. went ballistic and started jumping up and down with joy! And, that dog can jump—we’re talking five feet up in the air!

The four of us visited for a few more minutes, and I am glad that we did. We found out that B.W. is going to be living in the fanciest neighborhood in San Antonio! We’re not talking new rich, were talking old wealthy! I was so happy for Betty—her new home would make Paris Hilton’s dog green with envy!

Betty White was so excited about leaving our ranch, Tony had a hard time hooking her leash on her collar. And, she literally dragged T. out of her pen to B.! The four of us visited a little longer, and when B. opened up her car door—Betty White jumped into the backseat—like she had been shot out of a cannon! Then B., B-2, and B.W. drove away in their fancy sports car!

Speaking of cannons, you are not going to believe what arrived here today—for Tony! No, it was not a cannon, but an eighteen million power candle spotlight, that uses a twelve volt battery to project its light! It’s huge, and comes with a carrying strap, because it weighs so much—over 30 pounds!

When Rick and Leisa were up here this past weekend, Rick had told Tony about his newly purchased eighteen million power candle spotlight, and how cool it was, so T. went online and bought one, too!

Tone plans to use his giant spotlight for taking wildlife pictures at night, and to check on our dogs outside when it is dark. Today when it arrived, Tony and I started laughing about how big it was! “Tone,” I said. “I’ve got the perfect name for it. Let’s call it—Tony’s Flashlight! I can’t believe how big it is?”

Tonight, as soon as it was dark outside, Tony and I went into Outer Space to try out T’s Flashlight. The light beam was so strong—it reminded me of long ago, when lights in Fort Worth , would cross back and forth in the sky, for a car dealership, or a grand opening somewhere. Good Night. Have a great Thursday, and remember there's a full moon rising. 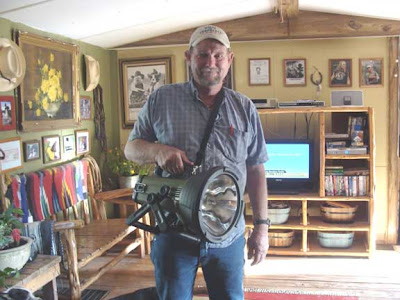 Tell Tony that the light will not only light up the dark but it will warm your hands on a cold night. I know because I was helping my son do an emergency plumbing repair one cold winter night and the light warmed us up as we repaired the leaking pipe.

What a wonderful story about Betty White's adoption! Congrats to her and her new family ; ))

Nancy, I bust out laughing when I saw Tony with that flashlight. OMG! That's HUGE! I thought at first it was one of those photo optical illusions, but, upon closer inspection I realized it's just simply ginormous! LOL

Nancy, you KNOW how THRILLED the NoMads are to read about the wonderful and way overdue adoption of our very most favorite Utopia dog (and you already know that we thought her the best dog agility candidate EVER) - Betty White!

We know that B and B2 will LOVE her and that she will love them! What a great story! I'm personally just beaming with happiness for all the "B's"!!!

HUGE congratulations on yet another successful adoption!