Today, has been another great day—as usual! It started out with Ben and me going over to visit Kinky at seven-thirty this morning! It was a blast—to say the least!

We had three sets of visitors come out today. Mike and Ben S., from Dallas, and Catherine Berry, who helps us adopt out our dogs, up in Buchanan Dam.

Katherine arrived around 2:15, and we had a short, but fun visit in Outer Space. She loved going into Outer Space with me, and she really loved my Space Ship! I also introduced her to Miles of Chocolate and of course—she loved it! She told me that she could not wait to get home to buy some online! We then went over to the Lodge to visit Kinky and Russ.

We had a fun visit, sitting outside by The Friedman Family Bond Orchard. As Catherine and I were fixing to leave, Russ asked if I he could come over to the rescue ranch, so he could eat some of Tony’s and my Miles of Chocolate. Of course, my answer was yes.

Ten minutes later, Tony, Ben, Catherine, and me were sitting in Outer Space, watching Russ eat a chunk of the best chocolate—on this planet!

Well, tomorrow is the big day—Kinky and I will be at the Barnes & Nobles Arboretum at 2:00 to sign copies of ‘Celebrating Our 10 Years of Rescue’—2009 Calendar, which by the way, is selling faster than a GTO! We are so proud of it! I can’t believe that it has been over ten years since we started the Utopia Animal Rescue Ranch—it still seems like it was just yesterday!

I am leaving tomorrow morning, bright and early, and driving up to Ronnie and Nita’s house, in Dripping Springs. Ronnie is the best brother anyone could wish for! I called him earlier this week and asked him if he could drive me to Barnes & Noble, because I am terrified of Austin traffic. He said yes! I then asked him, if I could also spend the night with them, because it will be dark, and I cannot drive at night—again—he said yes! Yes, he is great—I love him! 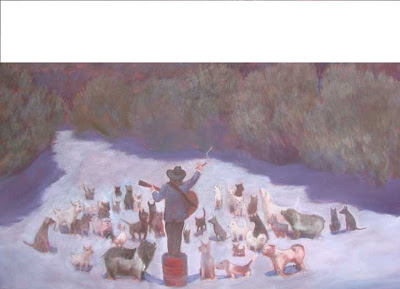 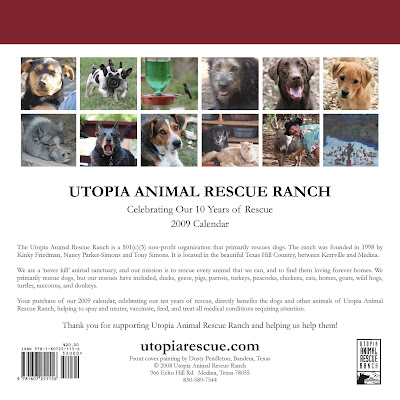 From our gate to Ronnie and Nita’s gate, it is exactly one hundred miles—it takes me two hours to drive it. My plan is to sneak out of Ronnie’s house, at the break of dawn, and get back down here by eight-thirty—Sunday morning.

My best friend and big sister, Cindy, offered to drive me to the Arboretum, but I had to turn her offer down, because she and Ray live thirty minutes away from Ronnie’s, in south Austin, and that would make my return trip thirty minutes longer. Since time is going to be of the essence on Sunday, I need to get back here as early as possible, because I will be at the Barnes & Noble San Pedro, in San Antonio, with Kinky—to sign our calendars at 2:30. Tony is going to drive me there.

Well, Ronnie has just called me, and told me some really exciting news! “Nance, I just talked to Cindy! She and Ray are going to come over here Saturday night for dinner—so we can have an early celebration of her birthday!”

I was so thrilled that I was going to get to see Cindy and Ray, too! Her birthday is going to be this coming Tuesday, November 18th, and in honor of her—I plan to blog another story about her! She is one super sister!

Y’all, I am tuckered out now. This is going to be one fast paced weekend for me. I will try to blog on Sunday before going to San Antonio. Have a great weekend! Love, Cousin Nancy
Posted by cousin nancy at 8:09 PM