It is now ten minutes until five o’clock in the evening—time for me to write a blog. To set the mood, this is what I do everytime before sitting down at the kitchen table to blog.

First, I turn on my salt lamp, then I light two sticks of Nag Champa, my second favorite incense,—next to pinion pine, from New Mexico. Then I pour ‘love worded water’ into my drinking glass, which has the word ‘love’ written on it, and then I turn my iPod on.

Today has been a great day for me! After breakfast, I went over to the Lodge and had a nice visit with Kinky. Then I returned home. I had nearly lowered my paperwork pile—about two inches, when Tony and Aaron came inside the trailer. “Nance,” Tony said. “Can you help Aaron buy some concert tickets online? His computer is down.”

“Sure,” I said. “Where do I need to go?” Aaron told me where to go, and in no time at all, he and I had the tickets ordered. To print them out, Aaron followed me into my office, where the printer is located. As the printer began printing out the two pretty tickets, Aaron said, “Is that a picture of you, Nancy?”

I was laughing so hard, that I was shaking like jello. “Thanks Aaron—nice compliment for so early in the morning.”

“I’m sorry Nancy. I mean, I just can’t believe that you looked like that. You were hot! How old were you in this one?” Aaron asked, as he dug his grave a little deeper.

“Twenty-eight,” I answered, as I continued to shake with laughter. “I keep those pictures on the wall, to prove to people, that I, too, once was young and pretty. Everyone is beautiful when they are young—it’s a given. Wait until you are fifty-seven years old, and someone looks at your old pictures, and they cannot believe that you once looked like that. It is part of the joy of becoming a senior citizen.” I handed Aaron his tickets and we left my office.

“Tony your old lady was really hot way back then. Dang!” Aaron said. “I can’t believe it, man!” (Aaron is thirty-two years old and from California!)

I couldn’t believe Aaron! Tony shot me a wink and smiled, shook his head, and then started laughing, too. Then they went outside, I guess, so Aaron could decide where he wanted to dig his grave.

Around noon, Tony came inside with our mail. After sorting through it, I found a card addressed to me from my new found friends, that I met at our event—Jimmie and Nelda, from Arkansas! Their note was so sweet and full of compliments and love—it filled me with love! They wrote that they could not believe that I had blogged about them, and said, ‘I almost fell off the couch when I saw that!’

What sweet people, to take the time to write me a note! I know that Jimmie and Nelda read my blog, so this is for them— ‘I love you two! Y’all Rock! And, thank you so much for the kind words!’

After I shared Nelda and Jimmie’s note with Tony, the dogs started barking outside, so Tony went outside to see what was the matter. Twenty minutes later, he came back inside to tell me that a man wanted to adopt Bobbie Nelson!

As I filled out the adoption form, Tony told me that the man was really nice, lives about six miles from us, has three dogs, and his old dog had died three months ago, and he was ready to adopt another one! Then we went outside to talk to a man about a dog!

The three of us visited for about twenty minutes. Then Don L. filled out our adoption form. Tony found Bobbie a new collar, put her tags on it, and then put her new collar on her. I know Bobbie knew exactly what was going on, because she could not quit wagging her tail, as Tony put her leash on her, and left the pen with her attached to the other end! 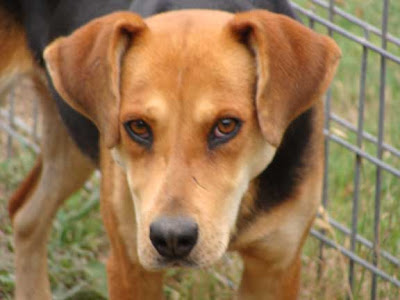 Tony handed her leash over to Don, and she couldn’t wait to load up in his van and get out of here! Two minutes later, they drove away. And, Don told us that he might come back and adopt Willie Nelson, after he talked to his wife about it! We’re keeping our fingers crossed!

The countdown has begun. It is now time for me to go into Outer Space with Tony! I am going to talk to Tony about possibly sending Nelda and Jimmie a copy of our mailing list, and asking them if they would consider writing everyone—one of their loving notes! Everyone should be as lucky as me, to receive—a love letter from them! I can't wait to show it to Kinky!
Posted by cousin nancy at 6:29 PM

Nancy writes..."I know Bobbie knew exactly what was going on, because she could not quit wagging her tail..."

Awww, that is so sweet. They do seem to know. Dogs rule!! So happy for Bobbie & her new family.