Even though it is M.I.R. (Mercury in retrograde) time again, with only one more day left, things have been pretty good since last Thursday.

Our friend Mercury, messed with our Longmire Texas-Style filming plans Friday morning, due to miscommunications and cancellations and it was absolutely no ones fault, but Mercury's. But thanks to Lisa's and Eileen's determination to shoot a few scenes, we did a quick rewrite of the script and recruited Chris to play the character Ferg, in the Sheriff's office scene.

Lisa did most of the filming of the scenes that were a laugh a minute, because there was so much spur-of-the-moment ab-libing going on. And I bet that Gerry Olert, our official videographer who we hired to shoot our Longmire Texas-Style spoof, is going to have a hard time editing it, because he will be laughing so much.

Our costumes could not have been better, too. Lisa who plays the character Vic Moretti could of passed as Vic's twin sister, in her custom-made deputy uniform and Eileen, who had purchased a brunette wig to wear, to play Ruby's character, looked like Ruby's twin, too. Tony loaned Chris his jacket and we gave Chris a new Utopia Animal Rescue Ranch cap to wear to play his character Ferg. And here is a picture of part of what Little Debbie and I wore in our scenes. 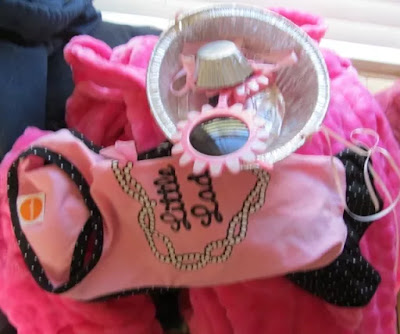 We still need to shoot several more scenes that will include all of us and Kris & Jim, who play the characters Cady and Longmire, and Chet O'Keefe, who plays Henry. And the cool part is Chet is writing the music and he will be performing it in our video spoof, too.

We are still working on a date to film the rest of the scenes and hopefully it will be happening sooner than later, because the real Longmire cast and crew will begin taping Longmire: Season 5, beginning in March. And we are hoping that our video will be funny enough to win us an invite to be on location with them, in Northern New Mexico.

And that's about it for now, except I forgot to tell you that Little Debbie had two wardrobe malfunctions. Right before shooting outside began her tiny alien-attracting helmet came apart and thankfully Chet rose to the occasion and quickly fixed it for her. And near the end of shooting, inside the pink, Sheriff's office, her pink dress fell off of her. It was hilarious, because she acted like she didn't care about being partially nude, because she was still wearing her helmet.

Y'all have a great evening!
Posted by cousin nancy at 5:15 PM

Mercury's been in retrograde? That explains a LOT. Our deep South Texas ranch ISP was going out every day about noon and wouldn't come back on until about midnight or later. We were sure we were being 'sabotaged' by evil high-tech 'pirates' who were stealing our GB during business hours to use for themselves!

Mind you, we just had the service connected a few weeks ago and haven't even received our first bill, yet - CRASH - the ISP went on the 'fritz' within a week! I'm betting MIR had something to do with it!

We finally got a service man out who opened a grey metal box on the outside of the ranch house and immediately saw a red light burning and said "Yep. It's broken." or some other such sage comment.

It is now fixed and will hopefully stay that way - at least until the next time Mercury is in Retrograde.

Hi Mari! Wow, M.I.R. messed with y'all, too. Last week, my printer went berserk, too. Tomorrow it ends thank goodness and then the next couple of days be aware that it is still slowly fading away and can cause a few problems, but they will be minor. I hope.