Today has been great. I spent most of the morning doing paperwork, etc. This past Saturday and this morning, our good friend Marguerite, who over the years has adopted four dogs from us: Enzo, Odi, Mini and Scout, the female puppy, has sent me some adorable pictures of Scout (formerly Sara Lee) taking a nap and Scout playing with her newest best friend, O.E.O.—one-eyed Odi. And I want to share them with you, because they are so cute. 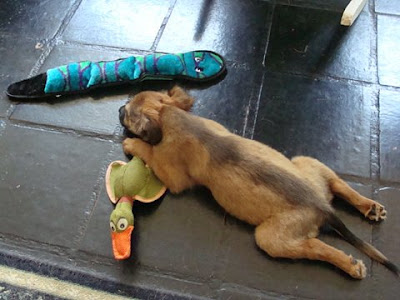 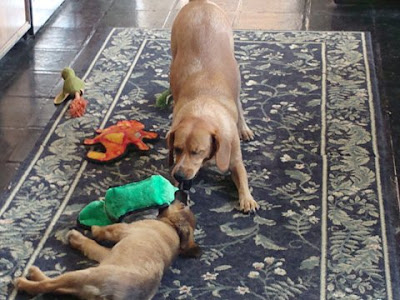 Early this afternoon we met our dear friend, The Mineral Man, for lunch, at Billy Gene's restaurant. And unfortunately, Kris couldn't join us, because she was out with her archaeological friends digging up rocks, bones, etc.

We had a fun, delicious lunch with Jim. When the three of us started talking about Longmire, I told them that I really wanted us and the volunteers to do a Longmire-Texas Style short video with a very funny plot. And this is my author's enhanced version of the conversation that we sort of had:

"Lisa could play Vic Morretti, because she is young and beautiful," I said. "And she could carry around my  Daisy Red Ryder, pink bb gun. Jim, you could play the part of Sheriff Walt Longmire. Chet could play Henry Standing Bear, who owns The Red Pony Bar & Grill. Tony could play Ferg and the other Jim could play Branch Connally and always have leaves falling out of his hair! And Kris could play Cady Longmire. Which means that your wife, in real life, would be playing your daughter, in the video." Then Jim, Tony and I burst out laughing. "Eileen could play Ruby, Longmire's sweet, competent dispatcher. And just think if it were to go viral maybe the real Longmire cast would invite our Longmire: Hill Country Chapter, to be on location, in New Mexico, with them, when they start shooting one of their Season 5 Longmire episodes. Wouldn't that be so cool?"

"Yes it would, Nancy," The Mineral Man replied, half chuckling. "But I want to know what character you would play?"

After our fun lunch with Jim, Tony and I went to Wild Birds Unlimited, one of our favorite stores, in Kerrville, so Tony could buy some more birdseed and we could visit with Marguerite and the nice owners, Kevin & Linda. And when we walked inside the super cool store, Marguerite greeted us with a smile. Then she and I immediately started talking about our dogs, while Tony shopped around. Marguerite and I had a good laugh about Odi and Scout only using the small, Chihuahua-sized doggie door and them refusing to use the much bigger doggie door, that Enzo, the German Shepherd uses. And needless to say, "We had a wonderful time at the Wild Birds Unlimited store.

Late this afternoon when I walked into the kitchen I caught Belle and Beau, under the kitchen table, staring out the window at something. I called them to come to me, but they wouldn't budge, because something had caught their full attention. 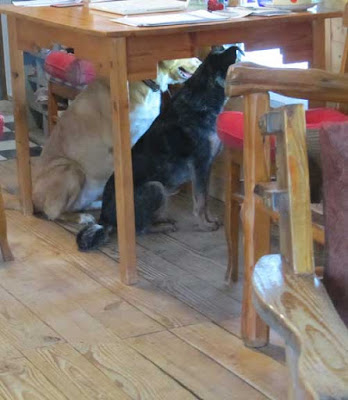 So, I went and looked out the window to see what it was they were staring at and I found this cute bunny sitting just outside our backyard fence. 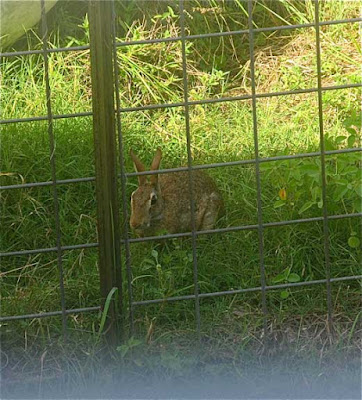 And that's about it for tonight, because Kinky wants me to come over for a visit and go on a hike with him and The Friedmans.

Y'all have a great evening!
Posted by cousin nancy at 5:45 PM