Sandy & Jon Wolfmueller Started All Of This!

Today has been great. This morning I got the cutest e-mail from Eileen, she and her husband are now  major fans of Netflix's Longmire hit series, just like Kris & Jim, Lisa, Chet and Tony & me are. And our dear friends Sandy & Jon Wolfmueller started all of this, because they were the ones that told Tony and me that we had to watch Longmire. And I am so glad that they did, because we're hooked.

After Eileen and I had shot back and forth, several e-mails about us loving Longmire, etc. This is my edited version of what Eileen wrote this morning:

"Oh Nancy, great idea about a Hill Country Walt Longmire Fan Posse! I also love Jim's idea about all of us getting Longmire or The Red Pony Bar & Grill t-shirts and post a picture! I think we should write a fan letter & ask if we fan possebers can be on the set, in NM, for the filming of a next season's episode! Wouldn't that be the coolest?!!

My predictions for Season 4:
Vic & Walt spend all season 4 flirting, hiding their feelings & making us wait for the end to see them get together, finally. Lizzie might come back in the picture to try to break them up!
Branch is alive!! Yea!  He has killed his dad & takes over the business to cause more turmoil for Longmire as Branch starts turning into his dad! Mean creep!
Cady gets back with Branch - for 2 or 3 episodes but he gets too crooked & mean like his sinister dad & they break up.
Vic's husband returns & wants to reunite with her while she & Walt are on the verge of declaring their love!
Poor Ferg, he is just ignored!
Finally, Henry meets a lovely, smart, honest woman, but that darn crooked Deanna returns & he just can't resist a trashy woman who will cheat & steal from him - again! Or then again, I may be totally wrong!"

We did a lot of mowing today and I kept thinking about Eileen's exciting Longmire e-mail, while I was riding the lawn mower, all over the place. Bottom Line: Our rescue ranch looks beautiful, once again.

After mowing, we came back inside The Cabin and we cleaned up and then took off, for Medina, so we could wash Trigger, because he really needed it and because I had a hidden agenda.

I was more than thrilled about how nice Trigger had cleaned up and my hidden agenda was to immediately put bumper stickers, on Trigger's rear bumper, after he had dried out. And I confess, that I copied what Kris & The Mineral Man had done with their Walt Longmire For Sheriff and their Utopia In Dog We Trust bumper stickers, because it looked so cool. In case you've forgotten, here's what they did to their bumper. 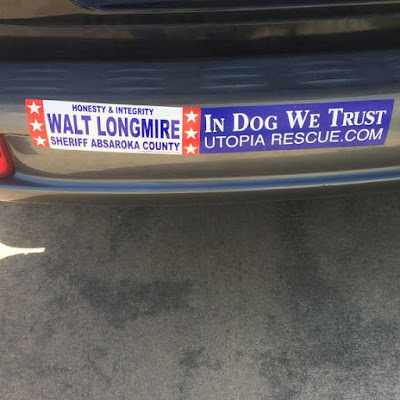 And here's what I did to Trigger's bumper. I wanted to put the bumper stickers, side by side, like Kris & Jim had done, but what the heck—I still love how they look. 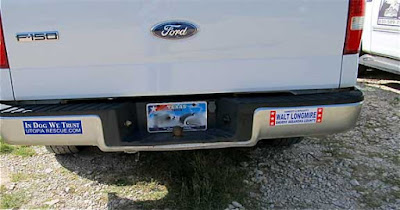 Around 6:00 this evening, Kinky called to invite Tony and me to come over for a visit with him and Brian Molnar and five minutes later, we were, over at The Lodge and I was talking to Kinky and Brian about the late, great singer/songwriter Townes Van Zandt. "I loved Townes and was good friends with him," Kinky said. "He was so great..."

"I love Townes music," I said. "And do you know that when I was young and living, in Crested Butte, I met Townes on several occasions, because back in '71 and '72 he was either hanging out, in Aspen or hanging out, in Crested Butte. I wasn't a good friend of his, because he was older. And do you know that Townes got kicked out of Crested Butte? And after he got kicked out he wrote a song called The Sheriff of Crested Butte. And Kemp, who was the Sheriff of Crested Butte and his brother Cordley were both good friends of mine. And Townes was born in Ft. Worth and ...." Then I caught Kinky, Brian and Tony all looking at each other and grinning. I guess that you could say that I was on another roll.

When it was time for us to leave, before we all adios-ed each other, I asked Kinky to please come outside and let Tony take a picture of him and me, posing between the two best bumper stickers, in the world. 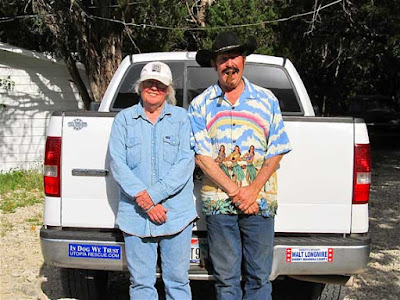 And that's about it for tonight.

Y'all have a great evening!
Posted by cousin nancy at 7:37 PM