Today has been great. Ten days ago a sweet woman called me to tell me that she and her son and his wife wanted to come out, because they were thinking about adopting sweet Honey. After I told her everything about Honey, I told her that they were welcome to come out anytime, but to please call me first, so we would make sure to have the gate opened for them.

Well, this morning Linda called me, asking me if it would be alright if they came out around 1:30. "Yes! We'll have our gate opened for y'all," I said.

They arrived out here around 1:40 and Tony and I liked them instantly. We showed them Honey and then we walked her down to the creek to let her swim. When we returned Danny asked us if we could show them the rest of our dogs.

And after we gave them a tour, Danny, who owns Ark Plumbing, in Ingram, asked his wife and mom to name their three favorite dogs.

After they had told each other that Lois Lane, Dale Evans and Honey were their favorites, Tony and I excused ourselves, for about ten minutes, so they could talk privately about it.

When we returned they asked us if they could take Dale Evans for a stroll down to the creek, so this time Tony went with them, so I could go up to The Cabin, to cool off and drink some water.

Twenty minutes later, Tony walked inside The Cabin and said, "They want to adopt Dale Evans." And we were absolutely thrilled about them picking Dale, because she, like Lois and Honey, are three of the sweetest dogs we have, at the rescue ranch. 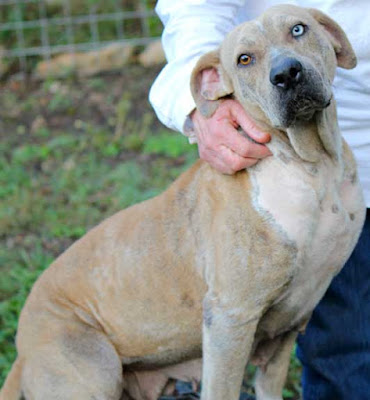 After they signed Dale's adoption papers I asked them if it would be okay for me to take their picture with Dale, so I could post it on my blog tonight. 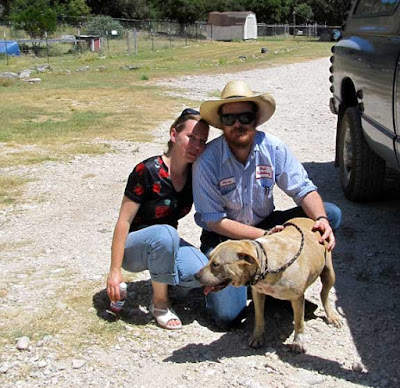 Before leaving with Dale, they told us that Dale will be an indoor dog and that one of them would always be home with her and their little, old Chi-weenie! So everyone please keep your fingers crossed for Dale that her adoption sticks. And that is about it for tonight, because I plan to spend my evening writing.

Y'all have a great evening!
Posted by cousin nancy at 6:14 PM

Our dogs all raised their heads from their comfort bedding to look hard at me this afternoon - because they wanted me to type a note to Dale Evans, so I hope it's ok with you.

They said to tell her two words "climate controlled" and they then told ME that those important words should remind her to always be on her very best behavior so her new home will love her forever and (coincidentally) let her stay indoors forever, too.

Then they all laid their heads back down to snooze the rest of the hot weather afternoon away......

I hope you will ensure that Dale gets this information pronto.