This morning I received some sad news from our good friends, Desiree and David, at the Trails End Guest House, in Kerrville, that Beckham aka Wilber Pigg, the soccer playing wild hog, that we rescued many years ago and adopted out to them, has passed away. I took these pictures, in 2009, of Beckham at three months old, before we adopted him out to Desiree and David. And you can check out his videos on the side bar, too. 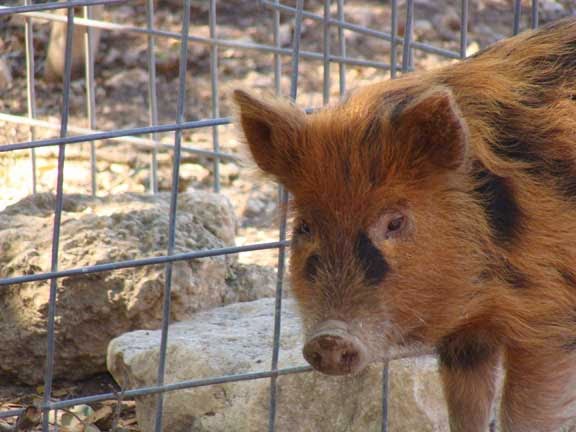 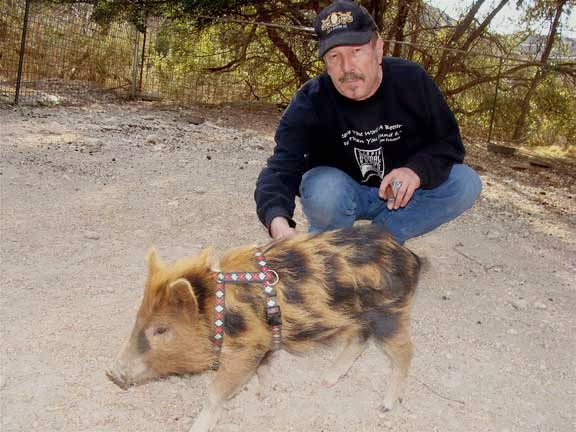 Here is the sweet obituary that David wrote to honor the orange & black wild hog that we all so dearly loved:

Sunday, August 24, 2014, Wilber Pigg passed on the land of no sorrows. It must be noted, though, that if Mr. Pigg ever had any sorrows, he never showed them to anyone. Wilber, who admittedly, was getting pretty long in the tusk, was spry till the last of his days. He could sprint across his pen as quickly as when he was but a wee wiener whenever he heard slop being dumped into his trough. Ever the fleet of foot, small cartoon like clouds of dust would be propelled through his cloven hooves to enable his timely arrival in front of his ten gallon custom designed and manufactured aluminum dining dish. He had the dish created to enable the full piquant of any morsel to rise and surround his finely tuned taste buds and olfactory receptors. This facilitated full concentration and enjoyment of any tasty slop that came his way.

Known in so many circles as an ever demanding gourmand, he could find delight in a simple mush, be it accompanied by a fifty-eight degree, gently poured full bodied cabernet or a tepid two liter jug of Big Red sloshed in with little grace. His culinary genius for pairings knew no bounds and many was the time when guests would stand in awe and amazement as he skillfully tossed out the errant mushroom or potato slice that did not measure up to the perfection that all finely prepared slop should aspire to achieve. While chocolate chip cookies accompanied by robust ales and stouts were his afternoon favorites, he was occasionally observed enjoying an India Pale Ale in their stead; although he was not especially a fan of the overly citrus bite from any hops not hauled to the brewery in oaken wagon beds.

Interviewed many times by bloggers from all over the world, they trekked with abandon to the nirvana that was his sty. He welcomed many queries on many topics but it always came back to food and his extensive knowledge of that subject. Ever humble, he quickly dismissed any similarities of greatness between himself and Mr. Creosote. His most famous quote concerning this subject was noted in a Swiss blog.
“Yes, yes,” Wilber chuckled, “I am quite familiar with Mr. Creosote’s body of work and the vast contributions he made to the world of fine dining. He was truly an artist, much the same as John Belushi. As it was said about Mr. Belushi after his untimely passing, “who can say what might be the limits of genius?” Seemingly Mr. Creosote did step over that line by accepting “just one thin wafer” but did he really? I prefer to feel his was a life of sacrifice that opened the doors for culinary disciples such as me.”

To limit the life of Wilber Pigg to simply the food-stuffs world would be a tragedy. He was so much more. He was a friend to all that needed a friend. He always had a gentle welcoming grunt to each visitor. He was especially close to a married business woman in his community and though some local scallywags hinted at more, he insisted it was strictly platonic. He was on excellent terms with her husband and any late evening pen meetings between he and her were quite honorable.

Though initially brought into a Jewish home he lived with Gentiles for the majority of his life. His own faith he discussed rarely, though it was rumored he had a fascination with Viking beliefs and rituals. It is said he was observed once, in the shadowy glow of an October full moon, standing on his rear trotters, Viking helmet on head, breastplate on chest and spear in hoof oinking out a modified chorus of a melody composed of Wagner’s Ring Circle and Strauss II’s Der Fledermaus. This is just rumor and while there were hidden cameras filming his rendition, in an odd twist, the developed negatives have never been located.

He was interred in a private ceremony at an undisclosed location in his much beloved Texas Hill Country where he resided. In lieu of flowers Wilber requested contributions be made to the Spam Museum in Austin, Minnesota. When asked about this unusual requested he stated simply, “I may be a porcine, I may have been raised in a Jewish home for a time and I know that it seems odd but I just love that wonderful pink chicken.”

After reading the obituary, I sent this e-mail to David and Desiree:

"Hi Desiree and David. Tony and I loved reading our friend's obit, even though Beckham/Wilber has passed away and gone to the "All You Can Eat Buffet In The Sky." His obit made us laugh out loud several times and I think Beck/Wil would have wanted it that way, too. Thank y'all for taking him in and giving him a wonderful life filled with love and food or should I say, "filled with FOOD and love." We loved Beckham and Kinky, Tony and I cannot thank y'all enough for adopting him and feeding him so well.

In my heart, Beckham will always be the coolest pig (Wild Hog) that I've ever known. "Rest In Peace Beck and may the "god of pigs" feed you as good as Desiree and David did, at their Trails End Guest House, in Kerrville.
With Love,
Nancy

P.S. Tony and Kinky send y'all their best."

Y'all have a great evening!
Posted by cousin nancy at 7:50 PM

" It is said he was observed once, in the shadowy glow of an October full moon, standing on his rear trotters, Viking helmet on head, breastplate on chest and spear in hoof oinking out a modified chorus of a melody composed of Wagner’s Ring Circle and Strauss II’s Der Fledermaus." Genius. Absolute genius!

Godspeed, Beckham/Wilber! You were a fine pig and will be long remembered!
Fay