Except For Little Debbie!

First off, I am feeling great and am so glad to be back among the living. That darn bug I had, I wish on no one. I would try to play catchup about last week, but too much time has elapsed and I don't have time to write for three or four hours. So instead, I am going to tell you about my day, before it hopefully starts thundering and raining again making me have to unplug again.

Today has been great. I woke up feeling like I always do—an old woman and I was thrilled about it. First, I put our dogs outside and Alice, the darling two-year-old Chihuahua that still is looking for a super home. Then I sipped a delicious cup of Green Mountain Donut Shop Coffee.

At 8:00, when CBS Sunday Morning came on, I decided to listen to the show and start catching up with the all of the paperwork that I didn't do last week, because of THE BUG. When I finished doing that I then started doing my middle of the month paperwork, which I knew would take several hours. And it did.

Then I cooked Tony and me lunch and not to brag—Tony told me that he loved it. Which I am not sure I believe, because several times he came back into the kitchen and would said, "Is it ready yet? I'm starving, Nance." Because he had to cook for himself, while I was sleeping it off off in La La Land. But I will say the roasted chicken, steamed zucchini with onions and mashed potatoes were pretty tasty.

Early this afternoon our good friend Ryan, the sweet husband of Donna Hatch, called me. And his phone call made my day great, because he wanted to know if we could get together sometime next week and jam, but this time at their beautiful home, because when we jammed with Chet O'Keefe, I suggested that we take turns going to each others homes.

While he and I were making plans, I said, "Omg, Ryan! I almost forgot to tell you that I've got some great news to tell you."

"I bought a looper!"

"When we come over, I'll be sure to bring it, so you can mess around with it..."

"Great. I've got a CD to lend you, too. It has several different rhythm styles and it is fun to practice with..." Anyway, I am thrilled to have someone to jam with and am looking forward to our next session.

"I am going to go outside, in a few minutes and mow down the tall grass and weeds, that used to be our front yard. A few minutes ago, when I put Alice and Little Debbie outside to go potty, I was watching Little Debbie. When she walked into that little 8' X 4', nearly three foot tall, mini corn patch, that keeps popping up, because of the birdseed, she completely disappeared into it. Just like the baseball players did in Field of Dreams." Tony started laughing. "It's not funny, Tony. I had to walk in there to remove her, because she wouldn't come out on her own, because I think she liked it in there. Anyway, I am going to mow the front yard, before it rains again. Okay?"

"Fine, but please take several breaks. I'll bring the mower up to the house."

Ten minutes later Tony started the mower for me and I started pushing and cutting down the yard and Little Debbie's little field of dreams.

I mowed for about thirty minutes and then I came inside and took a break. When I went back outside to finish what I had started—the mower would not start. "Tony!..." A few minutes later, after Tone had tried and tried to start the mower, he said, "I think you killed it." Then he started chuckling. "I don't know what's wrong with the dang thing. It has plenty of gas. I checked the carburetor and..." So we gave up and came back inside The Cabin. Then I immediately went back outside and took this picture. 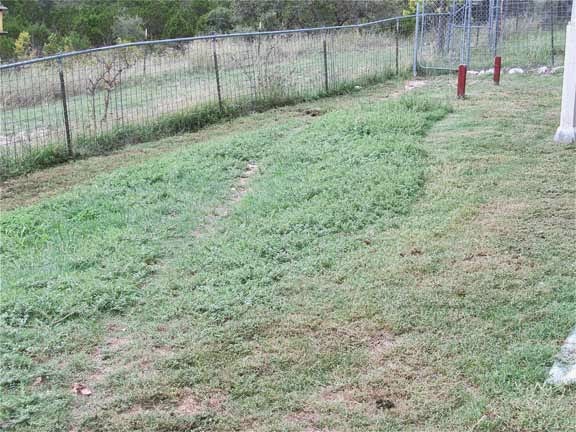 Early this evening sweet Tony went outside and cut down the rest of the tall grass and weeds, using the weed-eater. Now everyone is happy about the front yard, except for Little Debbie. As I finish writing this tonight, Little Deb is sleeping with Alice, in the temporary pen, beside me and I bet that she is probably dreaming about someday having her own cornfield. And that is about it for tonight.

Y'all have a great evening!
Posted by cousin nancy at 7:09 PM