Tony's 60th birthday is August 6th. For several weeks I've been trying to decide what to get him for his birthday. Monday morning, while Tony and I were, in Outer Space, drinking coffee I casually asked him, "Do you know anything about those GoPro cameras?" Because I was thinking about getting him one for his birthday.

When he said, "Yes. They are fantastic cameras and I want to get one." Which was exactly what I wanted to hear. So after we did our morning chores outside and came inside The Cabin, I secretly sat down at my laptop and bought him a GoPro Hero+3 Silver Edition, on Amazon and because I am a Prime Time member with free two-day shipping, I knew it would arrive by Wednesday. I was so thrilled about getting him a GoPro and then surprising him on the 6th.

Well, yesterday it was killing me all day long, not to tell him about his birthday present. I was so proud of myself for keeping the secret—until 5:00 when I told him. To say the least, "Tony was beyond thrilled!" So I suggested that we go to the Walmart, in Kerrville, to buy a few accessories before his camera arrived on Wednesday.

I bought him a memory card and a mount that can attach his GoPro to Kermit. And I bought myself some pretty gloves to wear outside when I am doing the morning chores, because the dogs are always scratching my hands. 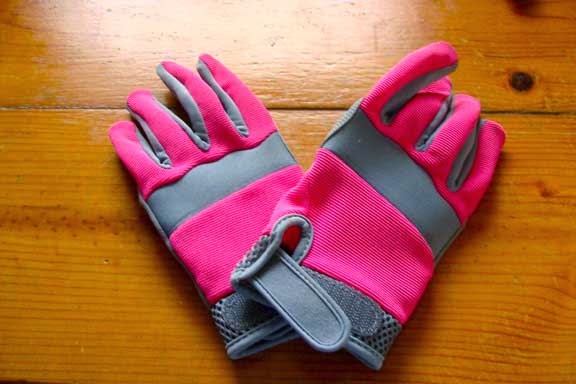 Today has been great. This morning Mama refused to take her pain pill for her arthritis. In the past, I've ground the big pill up and hidden it in canned dog food, scrambled eggs, pancakes, shaved ham and for the last two days, buttered popcorn with Parmesan cheese.

For lunch today, I cooked the Cheese and Bacon Grits recipe that I found in Grady Spears and Robb Walsh's fabulous cookbook, A Cowboy in the Kitchen. It was delicious and easy to make-and-bake and I served it with some fresh, cooked spinach, from Tony's organic garden.

When I started to clean up the kitchen, I decided to mash up another one of Mama's pills and hide it in the still warm, tasty cheese and bacon grits, in hopes that I'd get a pill in her today. And the good news is that Mama likes grits and she licked her bowl clean. "Mission accomplished! Thank you, Mama. I love you so much."

Later this afternoon, when Tony brought the mail in, I had received a package. "It looks like a book," Tony remarked as he opened up my package for me. It was a book and a very kind letter written to me from a local author, Shirley Gumert, who I have never met, but want to.

Shirley wrote that she loves my book The Road to Utopia, How Kinky, Tony & I Saved More Animals Than Noah, published by the University of Texas Press and that she has reread it several times. She wrote, "Maybe you'll have the time to read the latest publication from Chicken Soup for the Soul. This time, they are publishing The Cat Did What? And The Dog Did What?, on August 19th, with royalties going to humane association....Since I have a short piece in The Cat Did What?" 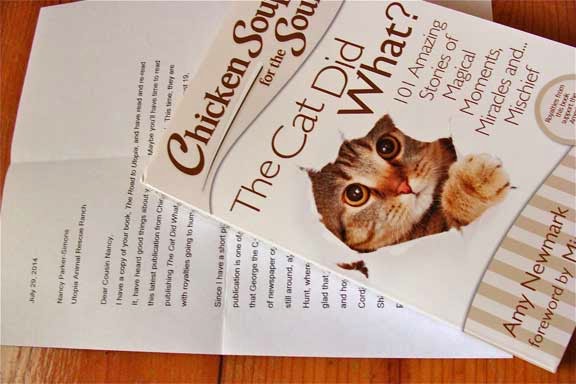 After reading Shirley Gumert's super sweet letter I opened up the book to find the story that Shirley had written for the book. When I went to page 301 to read her story titled, The Blankie, there was a yellow stickie note that read "To Nancy and Friends" and she had also signed the bottom of the page.

I read Shirley's story about her family's cat named, George, and it was absolutely fabulous! At times it was laugh out loud funny and filled with all kinds of emotions. "Thank you, Shirley. You're a fabulous writer and I loved your The Blankie story. Let's do lunch with local authors George Fischer, Donna Hatch and Phil Houseal soon. Please call me."

Now there is just a little more of exciting news to tell you about, that I've saved for the last. Right after Mama had eaten her medicated grits, a very nice woman, named Mary, called me about possibly coming out to adopt one of our dogs. She laughed and said, "My husband and I want to get a companion dog for Jack, our fourteen-year-old son, because he has three sisters...."

Around 3:45, Mary and Jack came out, along with Jack's three, sweet, older sisters, to meet some of our dogs. Jack and Mary were thinking about adopting a Lab or a Lab mix, because Jack wanted a dog that he could play fetch with. First, we introduced Jack to George Carlin and Bella. We told Jack and his family all about their history.

Jack liked George and asked if he could come inside their pen, to see if they would fetch his tennis ball that he had brought with him. Oh my goodness, when Jack threw the tennis ball—George raced to fetch it, but he would not give the ball back to Jack and George turned it into a hilarious game, as he played with Jack. They had all of us laughing, "We told you that George liked to fetch," I joked. "He just doesn't return things." Then I walked off to go greet the UPS truck driver that was here to deliver Tony's GoPro.

Twenty minutes later, we introduced Jack to Chad, Willie Nelson, Gretchen Wilson, Molly Ivins, Miranda and Blake, Marianne Faithful and a few others and the whole time I kept plugging what a great dog George was, because I knew he would be a great dog for Jack.

After we gave Jack's sweet family a tour, we went back to George and Bella's pen, because Mary and Jack were really interested in George. So, I suggested that we take George down to the creek, so Jack could see this water loving dog in action.

When Tony put George on Kermit's bench seat, Jack climbed onboard, beside George and George leaned over and licked Jack's cheek. Then all of us went down to the creek. George had all of us laughing as he kept plunging back into the water to fetch Jack's tennis ball and not wanting to give it back to him. Bottom line—our great, sweet, lovable, Lab mix, dock-diving-dog, George Carlin, got adopted today, at 4:30! And Tony loves his birthday present! 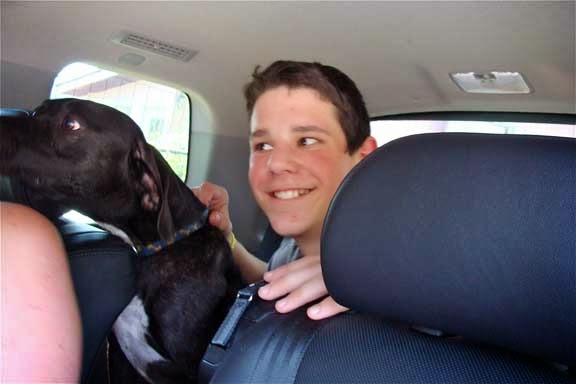 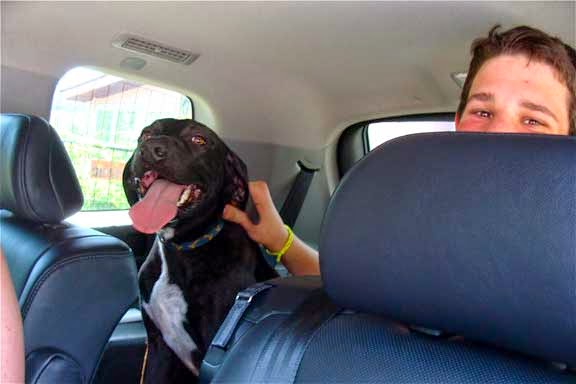 We're thrilled about it! Keep your fingers crossed for George, because the first few days are the most important.