It Turned Out Good!

Today has been really great. This afternoon around 2:30, I was outside visiting with Stacie, Tony's brother's wife. She had come over to take pictures with Tony. While we waited for Tony and Brandon to get here, I told her about Old Blue, my favorite blanket.

When the dogs started barking I looked up and saw Buttermilk coming in real slowly. "Tony's back," I said, as Buttermilk came to a stop, in front of Martha Stewart's pen. Then I saw Brandon get out with a big yellow Labrador. "Ut oh, Wilma Flintstone must have escaped," I explained to Stacie.

When Brandon and Tony drove up to us, Tony said, "We just rescued a dog from the Medina Children's Home campus. He looks exactly like Roy, too."

"I thought it was Wilma? Where'd you put him?"

"In the alley way between Tuesday Weld and Martha Stewart."

"Was he wearing any tags?" I asked.

"An old rabies tag. We tried to call the number at the vet clinic, in Boerne, but got a recording."

"I'm going to get him a big bucket of water," Brandon said, before taking off. Then Tony and Stacie took off to photograph the wildlife. And I headed for The Cabin, to get a pen and pad.

After Brandon gave the super sweet dog, which did look exactly like my Roy Rogers, some water I asked Brandon to remove the dog's collar so I could write down the phone number, etc. When Brandon had read off all the info on the old tag, I said, "I wonder what this dog's name is?" 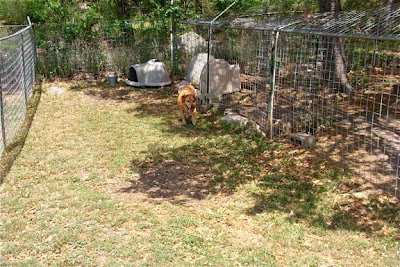 "Brandon, there really is a Roy Rogers, Jr. and Roy and Dale nicknamed their son Dusty. So we can name him Roy, Jr. or Dusty. Which one do you like?"

"I like Roy, Jr. best," Then we hopped into Kermit and Brandon took me up to the house, so I could try to locate the owners.

First I called the phone number of the clinic in Boerne, got a recording, so I left a message. Then something told me to call the Old Timer, in Medina, to let them know that we had rescued a dog. When I punched in the Old Timer's phone number a pleasant sounding woman answered, "Old Timer."

"Hello, this is Nancy from the Utopia Animal Rescue Ranch. I was calling to let you know that we just rescued a dog." Then the nice woman cut me off.

"Some people were just in here putting up a poster for their lost dog. Here, let me give you their phone number. Oh I hope it is their dog." Then she gave me the owner's phone number. After thanking her and telling her that I would let her know how it all turned out, we adios-ed each other. Then I punched in the Medina phone number.

"They found him!" she said. "When I saw your Utopia Rescue Ranch number show up on our Caller ID, I was praying that you had found him. Thank you, so much. We live near the Medina Children's Home and we will be there in just a few minutes..." Then I left The Cabin to go tell Brandon the great news.

Brandon was thrilled with my good news. Then we walked over to the tell the lucky Lab that everything was fixin' to be just fine. "I'm so happy for Roy, Jr.," Brandon said. "He sure is a fine dog."

"Brandon, this is your first official rescue with us. If you hadn't told Tony about this dog being found on the campus, things could have turned out differently for this dog. You saved this dog." Then the dogs started barking, as a car drove in. And Roy, Jr. started happily barking.

When the owners arrived they could not quit thanking Brandon and me for helping their dog get back to them. Marvin, who used to volunteer for us, before breaking his shoulder somewhere else, thanked me for helping get his son's dog back to him and he gave our rescue ranch a generous donation.

While Brandon and I visited with this nice family I asked, "What's your dog's name?"

"Louie," Marvin's son told us. "Our other one is named Elvis." Then Brandon and I told them about my Roy and how much they looked alike and us temporarily naming their dog Roy, Jr. and they thought it was pretty funny. Then Stacie and Tony walked up.

"Hey, Marvin. It's been a long time," Tony said, as they shook hands. After a few more minutes of visiting they adios-ed us and took off with one very happy dog, riding in their back seat.

Stacie and Tony took off for The Okay Corral to take more pictures of birds and flowers and Brandon and I came inside The Cabin, so I could call the Old Timer to tell the woman the good news about Louie. To say the least, she was more than thrilled. After adios-ing her, Brandon pulled out his harmonica and I grabbed my guitar, because he had finished all of his chores and it was time to make some music.

While we were jamming the phone rang. I recognized the phone number. "I've got to take this call. Rescue Ranch."

"Hello, this is Dr. Bill. The dog's name is Louie and the owner's phone number is..."

"Thank you so much for calling me back, Dr. Bill," I said. "I should have called you back." Then I told him the whole story about finding Louie's family.

When I got off of the phone, Tony walked inside The Cabin just as I grabbed my banjo, so I could play it with Brandon. "I'll take that," Tony said, as I happily handed Dale to him.

The three of us, The Fat Fingers, had a lot of fun making music. Brandon was fabulous on his harmonica and Tony played my banjo better than he ever has before. And that is about it for tonight.