Can You Hear Me Now?!

Today has been great. This afternoon we met our good friends Kris & Jim, "The Mineral Man" for lunch at both of ours favorite Mexican food restaurant, El Sol de Mexico. The food was delicious as always and our fun conversation never stopped flowing and it was full of laughter.

After a super fun lunch with our friends, Tony and I went to Home Depot to get some ranch supplies and a few more Perennial plants. Then we went down the street to Hoegemeyer Animal Clinic to pick up Holly, a dog that we rescued a few days ago.

Her name is Holly. She is a sweet, one and a half year old Pit Bull, that a man in Kerrville found, standing in the middle of a country road between here and Wimberley, Texas. He figured that she had been dumped, because she was starved down. When his wife opened up the door of their car, Holly jumped inside and laid down on his wife's lap and put her head in the man's lap and slept all of the way back home.

When we met Holly, I decided to keep her name Holly, because it seemed to fit her. When we took her outside she immediately jumped into Buttermilk's back seat and sat down. She's great in cars and when we got home I snapped this quick picture of Holly, so y'all could be the first to meet her. Tomorrow when I have the time, I will definitely take a better picture of her. 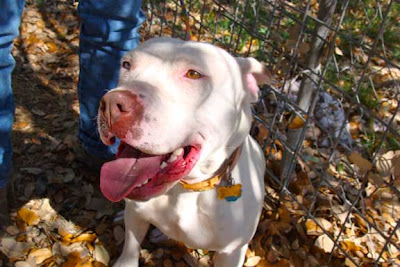 When we returned to The Cabin, Carlton was flashing on the breakfast bar. When I pushed his button he said, "You have three new messages." The first message was from my sweet brother Ronnie. "Nance, pick up the phone!..." The second message was from Ronnie, too. "Nance, I bought the coolest banjo. Listen." Then he put the speakerphone on and said, "Can you hear me now?" Then he started playing his new banjo and he and it sounded fantastic—it blew me out of my saddle. The third  message was from my brother, too. "Nance, call me. I cannot wait to tell you about my new banjo. I love it!..."

I immediately picked up the phone and punched in my brother's phone number, because I've been wanting to buy a banjo. "Nance, I love this banjo so much and it's made in the USA. It's not as loud as most banjos and it's meant for pickin' and grinnin' around a campfire and they are not expensive. They only cost $149.00!..." After Ronnie had spent five minutes telling me all about it, he put me on speakerphone and played one of his songs that he has written and by the time he had finished pickin' and singin,' I could not wait to get off of the phone, so I could buy one, too.

Before we adios-ed each other Ronnie told me to Google Backyard Music Banjo, in New Haven, Connecticut and that's exactly what I did when we got off of the phone. Two minutes later, I purchased one just like his and I can't wait until it arrives.

Then I went outside to kill some more Thistle that keeps trying to live here. An hour and a half later, after killing all of the Thistle on the east side of our dog pens I returned to The Cabin. Carlton was flashing again, "You have two new messages." And both of them were from Ronnie, too.

When I called him back he told me that there were some really cool YouTube videos to watch about people playing our basic 5 string Fireside Banjos. This one is less than thirty seconds and it is my favorite one. Hopefully, my banjo will arrive by Tuesday. And that is about it for tonight.

Y'all have a great evening!
Posted by cousin nancy at 7:59 PM