Today has been really great. For the past week, since a week ago Tuesday, Brandon and I have been tracking his banjo that Tony and I bought for his graduation present. This morning when  I tracked his banjo it said that it was out for delivery by the end of the day. Even though Brandon and I knew that it was supposed to be delivered today we've been counting the days and the hours.

"Brandon, UPS always gets here between 3:30 to 3:45 and I will call you the minute that it is delivered," I told him yesterday when he came out to work for us. Starting around 3:00 today I started doing some paperwork to help pass the time until its arrival.

At 3:57 Brandon called me to ask if it had arrived. "Not yet, Brandon, but it should be here soon. They must have a lot to deliver today. In fact, one time my package was delivered after 5:30. Don't worry."

Around 5:00 I went outside to find Tony to ask him if he would mind picking Brandon up, so he could be here when it arrived. When Tony and Brandon got here fifteen minutes later, Tony said, "The UPS truck is across the street right now and should be here in just a few minutes." Then we came inside The Cabin to wait.

At 5:36, while Brandon was playing my banjo, the dogs outside started barking. "It's here!" Brandon said, excitedly. Then he and Tony went outside to get his banjo. When he came back inside carrying the box that it was shipped in, I grabbed my camera and took this picture of him when he opened up the cardboard box. 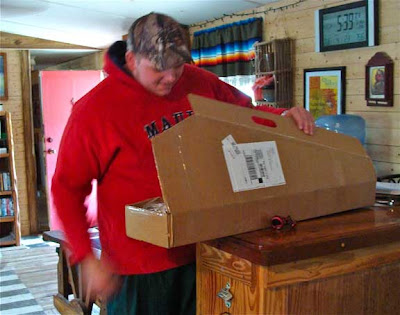 As Brandon removed the protective plastic from his banjo he told us that he loved his banjo and that he was naming his Fat Fingers. As soon as he had tuned it I gave him a Sharpie, because he wanted to write his name, Fat Fingers and date it on the back of his banjo, like I had done with mine. Then we started pickin' and grinnin'.

When Tony came back into big room I was playing Dale, my banjo and Brandon was playing Fat Fingers and we sounded pretty good thanks to Brandon's awesome musical talent. I quit pickin' and handed my banjo to Tony and said, "Come on and play with us." Then I grabbed my guitar. After Brandon and I had shown him the G, C and D chords the three of us started playing songs that only use those three chords, so Tony could play with us. Within just a few minutes Tony was easily moving from one chord to another and believe it or not—the two banjos and guitar sounded great together.

When Tony's fingers started killing him we stopped playing, because we also needed to take Brandon back home. And the best news is, Tony told us, "I love playing the banjo. Maybe I will buy one for myself."

"You don't have to do that, Tony," I happily said. "You can play mine anytime, because I can only play one instrument at a time..."

Y'all have a great evening!
Posted by cousin nancy at 7:38 PM