This morning after walking eight miles with Leslie I went over to the Lodge to see Kinky while Tony did his chores outside. When I arrived Kinky was on the phone doing an interview, so Marcie and I went into the Annex and had a fun visit. Ten minutes later Kinky came over and told me that he needed to talk to me, so he and I went back over to the Lodge.

When Kinky started making some coffee he asked me to read a piece that he had written and he wanted me to give him my thoughts on it. While his General Electric percolator perked I sat at the kitchen table laughing my head off as I read his extremely funny article which is going to appear in a magazine in a few months. "Kinky, I love this!" I said. "This is one of the funniest things I've ever read. It is fantastic!" Then he told me that Marcie, Frank and Will liked it too. (Right now I am not at the liberty to tell you what his story is about or what magazine it will appear in, but when his article comes out in print I will announce it so all of y'all can read it.)

While I visited with Marcie, Frank, Will and Kinky in the kitchen, Tony showed up in Kermit. After a fun visit with everyone, when Tone and I were fixin' to leave we all came outside and I discussed the possibility of eating lunch together in Kerrville. Kink wasn't sure that he could make it, because he had several errands to run, so we agreed to try to meet between twelve forty-five and one o'clock. Then T. and I said our goodbyes to everyone. When we had just walked outside the gate Kinky hollered, "Nance, don't wait for me. I may not make it. Y'all go ahead and order..."

"Don't worry about it, Kinky," I half-hollered back. "If you're not there by four o'clock, we'll go ahead and order!" As we drove away everyone was out in the yard laughing.

Tony and I arrived at the restaurant at one o'clock sharp and we didn't see Mr. Green Jeans in the parking lot. "I'll bet he will be here within fifteen minutes," I said as the waitress showed us to our table.

"I'll bet you he's not coming," Tony said as we sat down at our table. Well, it is a good thing that we didn't bet money and shake on it, because I would have lost the bet. After we ate lunch we decided to go to Wolfmueller's Books to see Sandy and Jon and that's when we saw Kinky drive across the busy intersection which was not towards the restaurant.

"Hi, Tony and Nancy," Sandy said as we walked inside their super cool bookstore. "Y'all just missed Kinky. Seriously, he just le!ft here about two minutes ago."

"He seemed to be in big a hurry too," Jon said.

"I know," I said. "We just saw him pass by. He told us that he had a ton of errands to run. We came by to see if y'all are still going to come to the Kerrville Folk Festival tomorrow night when Kinky and I will be there signing our books."

Before leaving our friends I asked Sandy if Tom D. Wells new book had come out. "I loved his first book, Strange Seasons: Summer! I can't wait to read the sequel. He is such a great writer."

"That was his second book, Nancy and the new one hasn't come out, yet," Sandy said. "I loved his first book, Drop-Ins. It is hilarious!" After I told Sandy that I wanted to buy it she went and grabbed his book off of the bookshelf and handed it to me. "I promise that you're going to love this one!" Sandy said as I paid her for the book. 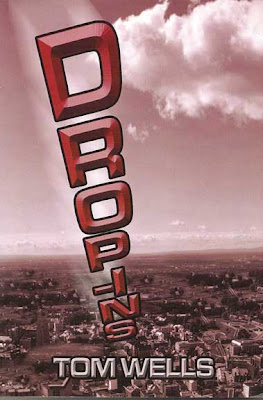 As Buttermilk took us back to the ranch I drove Tony crazy, because I couldn't decide what I am going to wear tomorrow night at the Kerrville Folk Festival. "Should I wear my jeans or my overalls, Tone?"

"Wear your overalls, Nance," Tony answered. "You look cute in them."

"Tony, you are so sweet even though I know that you are lying to me. No one looks cute when they're my age thanks to Newton's Law of Gravity. It's totally impossible and I am living proof. Do you think I should I wear the pink ones or the lavender ones?"

"I don't know, Nance," he softly whined, as I saw him press his foot down on the accelerator to speed up Buttermilk so we would get home sooner.

"If I wear the pink ones I can wear my pink boots or my matching pink Crocs, Tone. But if I wear the lavender ones we will have to go to the Camp Verde General Store tomorrow so I can buy some purple or hot pink Crocs to wear with them." Tony said nothing.

Y'all have a great evening!
Posted by cousin nancy at 8:41 PM