Yesterday morning I did not go out of town as planned because my back was worse. I must have twisted or done something to it during the night. My lower right arm was still pretty swollen, too so when I came hobbling into the kitchen Tony took one look at me, screamed and ran out of the trailer! Not really. What he actually said was "Nance, you look like crap." Not really again. Basically he told me that he didn't think I should go out of town so I took his advice, cancelled my appointment, took one baby Aspirin and two Aleve and then I made some coffee.

When I was cancelling my appointment, my friend told me that we probably had a spider nest and she suggested that I get some foggers and bomb the trailer. After I hung up the phone I told T. what Sam had told me and that I didn't want to do it, but we had to because I was sick and tired of the spider bites. As he was going out the front door I asked him to please pick up some foggers from the hardware store before coming home and he did just that.

After breakfast with Tone he went outside to work and I went and laid down on the bed because I was really hurting. Thirty minutes later after I had tried counting how many times the ceiling fan made a full circle I remembered that we had some heat wraps for T.'s back so I went and found them. 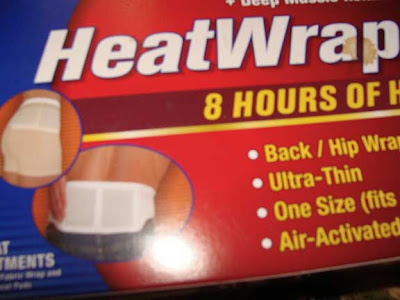 After reading the directions carefully I pulled the one-size-fits-all, gauze-like cloth belt out of the box and then opened two packages of "heat" and inserted them into the slots on the belt then I tried to put in on. That was fun.

Every time that I tried to attache the end of the belt to the the velcro end it would scrunch up. Two minutes later it was finally secure around my lower back and I was feeling the heat. An hour later my back began feeling better thank goodness. Then I did a really stupid thing at two twenty-five.

"Tony let's go ahead and set off the bug bombs. It says it takes two hours to euthanize the spiders and then we come inside and open up all of the windows and let the trailer air out for thirty minutes. Then we get to come inside close the windows and turn on the central air. Tony wasn't real keen with my idea, but he did it anyway.

After T. turned off the electricity to the trailer which the directions told him to do because our trailer might explode, he set off the foggers and came outside and looked at the thermometer on the porch. "Nance, we're going to burn up inside your cabin. It says the temperature is ninety-six degrees. We should have done this tomorrow morning."

"Oh, Tony," I said. "Quit projecting," as we carried our books, laptops and my Bose / iPod into my sweltering writing cabin. The first thing we did was turn on the two window air conditioners and then the two ceiling fans. Then Tony says, "Your indoor thermometer says it's one hundred and two degrees inside here. I knew this was going to happen. I'm already sweating..." Then Feliciano starts singing "Light My Fire" and we both started laughing.

After T. sat down on the couch right in front of the air conditioner he opened up his book and started reading. I went into the other room and carefully sat down in a chair and propped up my boots on the blue ottoman. Even though I wasn't real comfortable because of my back, I picked up my book Drop-Ins and started reading as sweat dripped down my forehead and the ceiling fans up above swirled hot air around the cabin.

Thirty minutes later Tony says, "Nance, are you okay in there? The cabin is finally starting to cool off. It's down to a hundred degrees in here. I am going to get some water. Do you want some?" Even though I was soaking wet I said yes. The minute Tone left the cabin to go get us some water I grabbed a roll of paper towels from my desk drawer and wiped the sweat off of my face. I could not believe how hot I was.

After we gulped down our cold waters we went back to reading. I was near the end of Tom D. Wells incredibly great book Drop-Ins and I couldn't put it down. About every twenty minutes or so Tony would interrupt my reading with a time-left and weather report. "We've got fifty minutes to go and it is now down to ninety-eight degrees, Nance. Did you hear me?" I ignored him and continued to read.

When two hours had finally passed Tony told me that he was going inside the trailer to open up the windows and turn on the air conditioner and then he was going to check on the dogs. I was down to seven pages to go before finishing the book and I couldn't wait to find out what happened with Farrow and Nick and Beulah, the dead body that had dropped-in and the greedy land developer from Kerrville—I mean Happton.

When Tony walked inside the cabin to tell me we could finally return to the trailer I was sweating like a pig and laughing my head off! As we grabbed our laptops, the Bose and our books I said, "Tony, I love this book! I can't wait for you to read it. I swear you're going to love it. Seriously, it was a great read..."

As we walked inside the cool trailer Tony told me that he would read it as soon as he finished reading his book. Then he started laughing and says, "Nancy, why is your butt soaking wet? Did you wet your pants?"

"No, Tony. I didn't wet my pants. Good grief!" After I carefully sat my laptop down on the breakfast bar I reached around and felt my butt and it was wet and really hot and then I started laughing. "That one-size-fits-all heat wrap that I've been wearing today has somehow slipped down to my rear end and it is hotter than the cabin was." While T. laughed I went into the bathroom and removed the unwanted bun-warmer.

This morning Ben showed up early to help Tony with his chores and to mow the tall grass which I haven't been able to mow because of my back problem! After they finished feeding the dogs and picking up dog poop they came inside the trailer for a break and as always we had a fun visit. Then Ben went back to work and Tony and I went to Kerrville to run a few errands.

Our first stop was at Walmart because I needed to replace the Leslie Sansone Walk at Home—"Walk Slim: 4 Fast Miles" because I have literally worn out the old DVD. As I was looking for it I discovered that she has a new one out called "Walk: Weightloss Bootcamp" so I bought both of them and I can't wait to start as soon as my back gets better. And yes, I do have a lot of catching up to do with my walking. 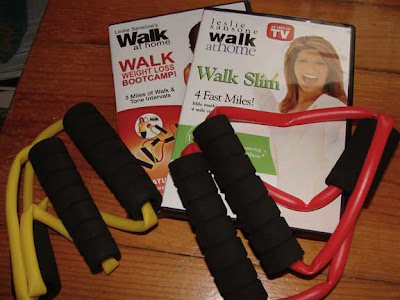 This afternoon a package arrived for us in the mail and we don't know who sent it to us. It was sent from the Yahoo Baking Company in Sherman, Texas and it was a Texas shaped cake called the Yahoo Cake. And it was absolutely delicious! 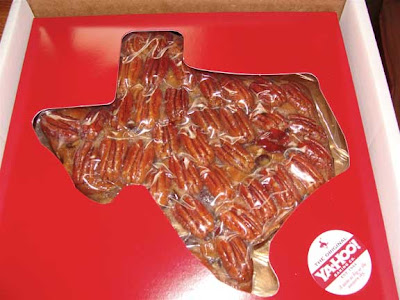 The packaging was really cool and there was a cute little pamphlet that explained the Yahoo Legend and it was really fun to read. On the front of the shipping box were these words: "For all the great work y'all do and for showing us such a great time." 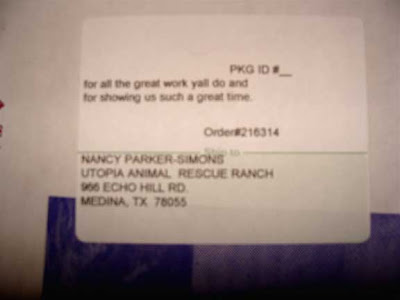 Last week Tony and I probably had five or six different sets of visitors out here and we can't wait to find out who sent us the delicious cake. Tomorrow I plan to call the bakery and hopefully they can solve the mystery.
Late this afternoon I went back to bed and laid down to rest my back and I ended up falling to sleep. When I woke up Tony was gone and Ben's truck was too, so I got in Buttermilk and went over to the Lodge. When I walked inside the kitchen Ben burped a funny howdy to me from the living room. "Hi, Sam, Ben and Will," I said as I walked in. Will and Tony were in the middle of a pool game and from where I stood it looked like they had the same amount of balls left on the pool table—even steven. "Hi, Nancy! Tony beat me," Sam Abdnour said with a laugh before he gave me a big bear hug.
Sam, Ben and I visited with each other and we teased The Medina Bulldog and The Cock as their game neared the end. Final score: The Cock -1, The Medina Bulldog -0. We hung around a little longer then Tony and I came home.
This evening Sam and Will came over for a fun visit and they thought that the mysterious Yahoo Cake was one of the best cakes that they had ever eaten. Sam told me that he loves living in Northern California and that he has to leave tomorrow so he can go visit his parents in Austin before heading back to  California. Tony and I had a blast visiting with him and Will and there was much laughter too. They just left about twenty minutes ago and I am looking forward to seeing them again tomorrow.
Now I am caught up with my news and I am pretty sure I know who sent us that delicious cake and hopefully tomorrow the mystery will be solved. I'll let you know.
Y'all have a great evening!
Posted by cousin nancy at 9:01 PM

Hope you get rid of those spiders, If they are brown recluse spiders they are nothing to mess with.