I Need To Take A Nap!

It is seven-fifteen in the morning as I write. Today is going to be a busy day for me and I still don't know what I am going to wear tonight. Since Kinky and I will be signing our books at the Kerrville Folk Festival tonight I am writing today's blog early and have scheduled it to post at eight o'clock this evening.

Last night at eight-forty-five, right after I posted my blog the phone rang—it was Kinky. "Nancy! Tony! Nancy..."

"Nance, we're leaving Kerrville right now and we're heading back to the ranch," Kinky said. "I need a favor. Daniel Taub, a reporter for Bloomberg News is staying at the ranch tonight and he wants to see the rescue ranch early tomorrow morning before he leaves for Austin to catch a plane back to Los Angeles."

"That's fine, Kinky. How early do y'all want to come over?"

"I want to bring him over there a little after six in the morning, because he has to be at the airport before nine. Is that okay?"

"Yes, if you don't mind. How about six o'clock?" As soon as I got off of the phone I went back to Tony's office and told him what was going on and then I asked him to wake me up at five and then I got busy.

After vacuuming the trailer with Hazel I made six egg and cheese breakfast tacos and then I wrapped them in foil and put them in the refrigerator. Then I ground some of Ben's gourmet coffee beans that he gave to us for Christmas, filled Mr. Coffee with water so I wouldn't have to do it this morning. Then I sat down and started reading Tom Well's book, Drop-Ins and I was immediately hooked and did not want to put it down when it was time for me to go to bed.

This morning when our alarm clock went off at five o'clock Tony was already up and dressed. After I dressed I put the breakfast tacos in the oven and started Mr. Coffee. Then I fed Lucky and the dogs.

At a quarter till six I punched in Kinky's phone number and he picked up on the first ring. "Good morning, Nance. We're up. Can we come over now?"

"Sure, but I need to go open the gate." I said. "I've got some breakfast tacos and coffee made for y'all."

"That sounds great. We'll be over there in a couple of minutes. Bye." As soon as I put the phone back in the cradle I jumped in Trigger and went down and opened our gate. Five minutes later as the sun was coming up I went outside and greeted Daniel and Kinky as they walked up to the trailer. Then I invited them inside for some coffee and breakfast tacos.

While we sipped coffee and they ate breakfast we had a fun visit. We mainly talked about the rescue ranch as Daniel took notes. After he told us about his and his wife's adopted, rescue dog that was part Beagle and Bassett I gave Daniel a copy of both of my books about our rescue ranch.

At six-fifteen it was time for them to leave so Daniel could get on the road. After Daniel gave me his business card I said, "Daniel, it was really nice meeting you. I want you to know that you have set a new rescue ranch record. We have never had anyone tour our rescue ranch this early in the morning and I am going to blog about it." Everyone laughed.

Daniel was so nice. He apologized for having to come over so early and I told him that I was teasing him and that it was no big deal at all. Then he thanked me for the breakfast and the books and then he and Kinky said goodbye to us and left.

It is now eight o'clock in the morning. Tony has not come back from the Old Timer, yet and I feel like I need to take a nap. Will write more later. I've got to go over to the Lodge to see Kinky.

While I was over at the Lodge Kinky and I talked about needing to take a nap, tonight's book signing, tomorrow's Chisholm Winery book signing and then we had a business meeting. Before I left I noticed a Nixon plate clock on Kinky's kitchen table and I laughed out loud. "I love your clock, Kinky!" Kinky and I both laughed as we looked at it. "Good grief! You can hear it ticking!" There was a moment of silence as we listened to it tick.

"You can have it, Nance," Kinky said. "It needs to be worked on. Take it." I did as I was told and took it with me when I left the Lodge. 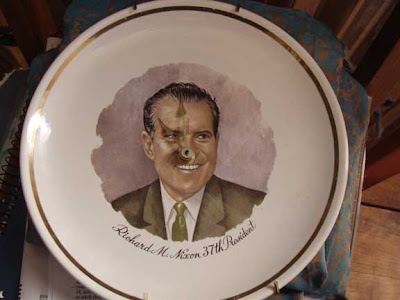 When I returned to the trailer with the 37th President clock I showed it to Tony and it made him laugh, too. Then we went outside and took pictures of this Luna moth on the front porch. Here is the picture that I took. 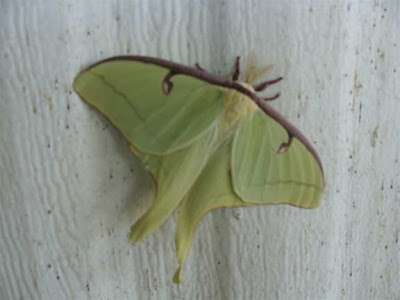 Now I am going outside to clean dog pens and then I plan to take a much needed nap.

I just came in from cleaning the dog pens. When I started cleaning Hank's and Nellybelle's pen Jim McMahon, our great dog-walking volunteer arrived. After a short visit with him he leashed up Blackie and Alfie and took them for a walk.

Thirty minutes later while I was cleaning Mr. Rogers and Miss Dee's pen our friends and great volunteers Ellen and Eileen arrived to walk our dogs and I couldn't wait to talk to them about Jermaine Jackson and Callie Dean Gotke, because I love getting updates on the dogs they adopted from us.

"Callie is doing fantastic," Eileen said. "She is so smart! And she already knows how to sit on command and..." Then it was Ellen's turn to brag.

"Jermaine is doing good too. Last week he..." Their stories were funny and we did a lot of laughing. After Jim returned Alfie and Blackie to their pen he came over and asked if he could buy a copy of my book from me so Ellen and Eileen took off to walk some dogs and I came inside the trailer and signed a book to Jim and then took it out to him.

After lunch I cleaned up the kitchen and then told Tony that I had to take a nap because I was exhausted from lack of sleep so I went and laid down on the bed with Lucky and my dogs and Tony took off for Kerrville to run a few errands.

I just got up because I couldn't fall to sleep because I kept trying to figure out what I'm going to wear tonight. I know that tonight will be fun no matter what I decide to wear and I am hoping that I will sell a lot of books and will get to see Jim Finney an old friend of mine from Austin.

I've known Finney since the eighties. I met him when he was a roadie and the sound man for Ray Benson's Asleep At The Wheel band. He used to come by our embroidery business to pick up the hats and jackets that we sewed for the band and that's how we became good friends.

Our paths crossed in the Fall of 2007, when Tony and I went with Kinky to Kerrville to see Ray Benson's play "A Ride With Bob." After we got off of Ray's bus I asked one of the cast members about Jim and he told me that he was their Road Manager and doing the sound that night then he took me over to see him. We caught up with each others news before and after the show and it was really great seeing him, again. And Tony liked him, too. The dogs just started barking. Gotta go—some body is here!

It was our friend Richard of Richard and Jane. When I went out to greet him he told me that he had something that he wanted to talk to me about so we went into Outer Space. After we sat down Richard told me that he had talked to Jon Wolfmueller the other day about the book he is writing and Jon had told him to talk to me about self-publishing. So I told him everything I knew about publishing within forty-five minutes then another unfamiliar car pulled up to the trailer and two people got out.

As we walked out the gate to greet them Richard thanked me for my time and then drove away. "Hi, I'm Nancy. Can I help, y'all?" Laurie and Bob introduced themselves and then told me about the trouble they were having trying to catch a feral cat at the cabin they were staying at, so I invited them to go into Outer Space with me so we could talk, because I liked them.

After we discussed their cat problem Bob told me that he was a musician and he knew Kinky. "I played guitar with Jerry Jeff at your first Bonefit."

"Wow! That was a great night at the La Zona Rose!" I said with enthusiasm. "That event was on March 10th 1999—the day Tony and I got married..." Well, as usual I talked my head off and we discovered we had mutual friends in the music business. He knew Finney and Henry Gonzales, too. Near the end of our fun conversation I called Kinky to see if we could come over. "Kinky, it's Nance. Your friend Bob Livingston and Laurie are over here. Can we come over?"

"Yes, the Bob Livingston." Bob and Laurie laughed and then they followed me and Kermit over to the Lodge and we had a really fun visit with Kinky. Then Laurie and Bob came back to the rescue ranch to borrow one of our "live traps." After they left I went back over to the Lodge to discuss tonight with Kinky. Before coming home we decided to caravan to the festival and leave a little after six.

I just got home and it is four -twenty and I am starting to go into panic mode, because I still don't know what to wear and I need to take a nap.