From Yesterday's To Be Continued...

Yesterday at five-thirty I was in the shower when Kinky called and left a message on the machine, "Nance, Frank and I are ready to go to the festival. Let's go. Call me." When Tony heard his message he came and told me that Kinky was ready to go even though we had planned to leave a little after six o'clock. Tone's news caused an adrenaline rush and I was no longer tired. After I quickly dressed in my jeans and navy blue rescue ranch long-sleeved t-shirt and put on my pink boots I took a baby Aspirin and then called Kinky.

"Kink, I need five more minutes then we will meet you out in front by the gate." Three minutes later we left the rescue ranch and closed the gate behind us. Then we saw a maroon pickup parked ahead of us on the road. When we came to a stop an elderly man jumped out of his truck and approached us wearing a badge around his neck, so I rolled down Buttermilk's window. "Can we help you?" I asked.

"I hope so! I am with the Census Bureau."

"Sir, I filled out and mailed the form out on the same day that we received it," I said. Then he scratched his head.

"I'm not looking for you. I am trying to find these addresses..." While we tried to give him directions we saw Mr. Green Jeans with Kinky and Frank inside coming to meet us and then they stopped when they reached the fork in the road. As soon as the man had the directions we told him that we had to leave. He thanked us and then we took off. Buttermilk followed Mr. Green Jeans all of the way to the folk festival and then we parked them side by side. Then we went to check ourselves in and get our V.I.P. wrist bands and then the very nice volunteers took us to our table with four comfortable chairs. After we checked in our books for them to sell for us we sat down and the fun began. Here is a picture of the sign they made for me that they taped to our table. 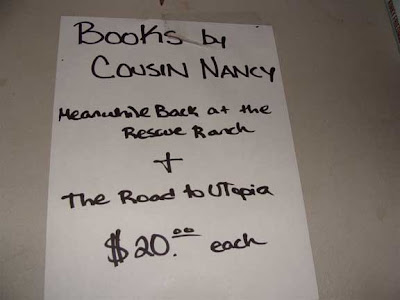 Suddenly out of nowhere Kinky had hundreds of fans surround us at our table that wanted to shake his hand, get their pictures taken with him or to discuss politics with him. Here is a picture that I took of Tony and Frank people-watching from their chairs in the foreground, as Kinky posed for pictures with fans behind them. 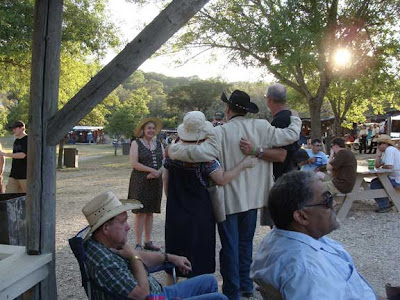 Kinky and I went onstage after the first performance which was great. He read his beautiful story of The Hummingbird Man and the crowd loved it and then he introduced me and I came out on stage. After Kinky lowered the mike for me I said, "Hi, y'all. I promise this is a short story."

Then Kinky quickly quipped, "And you're short!" The crowd roared with laughter and then I began reading even though I was a nervous wreck. Tony took this short eleven-second video clip of me when I started to read the funny story about Kinky and his Willie Nelson t-shirt. Tone told me after we came back to the table that they had nicely told him that they did not allow for anyone to tape the show. Here is a picture that T. took of me and Kink right after he called me short. 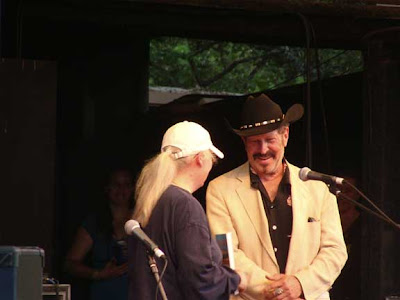 I sold a few books and Kinky sold a ton of his books. We all enjoyed the festival and I want to thank Dalis and the Kerrville Folk Festival Volunteers for taking care of us in grand style. Y'all Rock!

Tony and I left the fun festival around nine-thirty because we were so tired and unfortunately I  didn't get to see my friend Finney. When we got home we went straight to bed and we slept like logs.

Today has been great. Kinky, Little Jewford and I had a blast this afternoon at the Chisholm Trail Winery in Fredericksburg and I fell in love with Paula and Mike, the owners. They are the nicest people! I will tell you all about it tomorrow after I do my interview with Connie Strong for the super cool magazine Texas Live. I am really looking forward to meeting her tomorrow!

I am hooked on Tom D. Wells book, Drop-Ins and I can't wait to read a few more chapters tonight before we go to bed. It is absolutely hilarious!

To Be Continued Again...
Posted by cousin nancy at 8:42 PM